Earlier this week, Shams Charania of The Athletic reported that the Milwaukee Bucks would be a strong suitor for Sacramento Kings restricted free agent Bogdan Bogdanovic in the offseason. With a sign-and-trade being the only realistic way for the Bucks to acquire Bogdanovic. With few attractive, young assets or first round picks in Milwaukee’s asset cupboard, compensation in a deal would likely come down to second-year shooting guard Donte DiVincenzo and matching salaries. The concept of dealing Bogi for a not so young, not so proven rookie-scale player may feel a bit familiar, as the Kings and the Los Angeles Lakers engaged in some sort of failed trade talks centered around a Bogdanovic-Kuzma swap last February.

Those two potential options spark an interesting, theoretical, and wholly meaningless debate in made-up trade scenarios. DiVincenzo, known for his perimeter defense, will turn 24 in January, while Kuzma, known for playing for the Lakers, recently turned 25. Neither player put up astounding numbers last year:

Kuzma and DiVincenzo are also paid similarly, with Kuzma making $3.5 million next year, and Donte ranking in just over $3 million. However, Kuzma will enter restricted free agency one season sooner in 2021, while DiVincenzo won’t see his next payday until 2022-2023.

Just for fun on a Saturday morning, and with the full knowledge that likely neither of these scenarios will come to pass, who would you prefer to build a trade package around, Donte DiVincenzo or Kyle Kuzma? 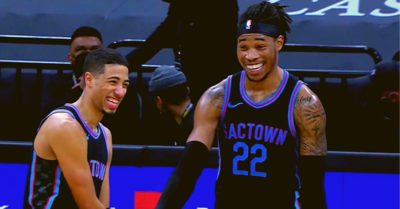 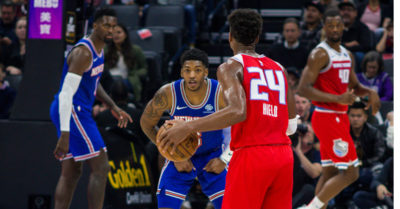 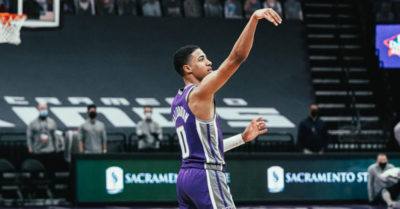 If you put a gun to my head and said Bogi had to go for one of those two players, I’d take Donte. I absolutely do not want Kuzma.

Like you said, it his highly unlikely either of these trades happen.

Why is this kuzma thing keeps circulating?! Besides his lackluster performance on a Lebron-led team, the on and off court drama just makes him an unwatchable and unlikeable player.

Neither. I’d rather keep Bogi. Why even entertain this discussion? He fits next to Fox. Floor spacer when Fox has the ball. Secondary playmaker with the ball in his hands. Bogi is a King. Forget it.

Because as Tim said, there is a rumor that the Bucks want Bogi and there was discussion of Bogi for Kuzma swap last summer. Did you read his last paragraph? It’s just for fun discussion on a Saturday morning.

neither Kuzma nor Divencenzo can space the floor and neither can be a secondary playmaker. what is fun about suggesting trading Bogi for one of them? There was a brief time when this site was a place to commiserate but you might want to rename it Losaholics Anonymous if you really think those are fair trade proposals.

if you could keep Bogi for $90 million over 4 years, or trade him for one of these two players what would you do?

That wasn’t an option on my multiple choice test sir.

Flogging is always an option. Ye of little faith.

I would rather keep Bogi than see him go for either of those players, but that may not be feasible. It’s very possible that Bogdanovic wants out, especially if a contender wants to sign him, and matching a player who wants to leave is always a tricky and potentially ugly situation.

It’s also likely that Monte McNair is going to choose between Buddy and Bogi this summer. The Kings aren’t going to want to invest $40 million per year in a pair of solid, if unspectacular shooting guards. If McNair wants Buddy’s shooting over Bogi’s versatility, it would be far better to get a young prospect back in a sign-and-trade than letting him walk for absolutely nothing.

Are either of these deals going to happen? Probably not. It’s just a silly exercise that originated in the Kings Herald group chat. But it’s probably important to start assuming that one (or both) of Bogi and Buddy are gone this offseason.

Agreed on all points, especially your last sentence.

Why not both? Buddy and Bogi are both specialists in today’s nba, the Kings aren’t good enough to afford the luxury of one, let alone two specialists at this point.

What is Bogi a specialist in? Versatility?

I’ll be in the minority and say I’ll take Kuzma. He could easily replace Bjelly as the starting 4 or could also play as our 6th man off the bench.

My issue with Kuzma is the false narrative that he is a stretch 4. Corey Joseph is a better 3pt shooter than Kuzma! He really doesn’t do anything good.

Agreed on all points. I just think Kuzma has more potential and in the long run be the better player overall compared to Divincenzo..

so guessing you aren’t that high on Divincenzo…

BJelly can do much more different jobs than Kuzma……

BJelly can pass, rebound, blk, weak side defense…….
(maybe Kuzma is better at one on one basket)

Agree. If I am forced into taking on marginal players, I’d prefer they’d be 6’8” and sort of be able to shoot the three.

I sound like a broken record in my Kings chat group, but if I were the GM of this team I would be uncovering every stone around the world to find 6’8”-ish players who can shoot the three. I don’t care how small of a school or what country, I’d be taking a look at them. I think I’d pretty much let my small market franchise live or die on that philosophy.

Last edited 3 months ago by Marty
1
0

That’s a strong argument for drafting Saddiq Bey at #12

Down for the Jay Wright combo of Divencenzo and Seddiq Bey. Every player from Villanova seems to be having success immediately (Divencenzo, Paschall, Briges, Brunson, and even Spellman). Nova is amongst the leaders in defensive efficiency year in year out and it translates. Bey is likely the most complete prospect out of this group.

With the rumors that Brooklyn is looking to dump Prince, and might even include their #19 as compensation, the Kings should be on the phone. Prince is a solid 3/4 that can stretch the floor. I’d eat his deal for some second rounders if the Nets are indeed looking to dump him. Maybe they’d want Nemajna’s non-guaranteed deal?

I think Monte would go for these kind of deals. Who do you think we should send back for that?

from what I understand, Brooklyn just wants to shed salary. They are top 5 in salary next season and still want to bring back Joe Harris. Doing so would likely make them #1 in salary. Kings could send something small like Justin James and/or Nemanja’s unguaranteed, and some 2nd rounders.

It all comes down to how badly the Nets want to get rid of Prince’s deal.

All that being said, there are some teams with cap space that could send nothing in return and still eat Prince’s deal, sort of like how Indiana took on TJ Warren’s deal last year. They got a pick to boot for it as well.

Donte & the extra year of rookie contract (compared to Kuzma). Just looking for flexible & moveable assets at this point, and Donte fits that bill better.

That said, I’d prefer Bogi on a manageable deal, if at all possible (3/50 would approach my ouch point).

Since we’re talking about the Lakers and the Bucks, why not either Lebron or Giannis? 🙂

Credit to Kuzma for his on defense on Butler in the finals but he irked me watching him play. There were many times where he had the lane and I’m thinking he’s dunking it for sure and he goes for a weak layup and misses. 6’8 and going for layups smh.

I’d rather we get Divincenzo cos he has a better skillset than Kuzma IMO.

Donte averaged fewer minutes, fewer FGA, fewer 3PA, and fewer fouls per game than Kuzma. He has better averages in rebounds and assists, both desirable qualities for this Kings team. He’s younger, AND he’s under a better contract with less of an LA influence on his value. I obviously think Bogi is worth more than just this, but if the goal is to get younger, especially at the 2, Donte is the obvious choice. I wouldn’t despise a trade package that swaps Bogi for Donte along with Indy’s 1st this year. Maybe throw Memphis’s 2021 2nd in if the Bucks are iffy.

Folks hear about a potential issue with a team, say Heild being unhappy and Bogi being an RFA

You then get a couple of options, teams who want a good player and don’t want to offer anything say the Lakers and Kuzma, why wouldn’t the Kings want to send either of Bogi/Buddy both who are good NBA players for Kuzma who I wonder if he played for say the Pacers or any other team how high they would be regarded

Or its scouring a specific teams Roster say the Bucks then lets make a trade on the trade machine.

I’d be happy with a Divincenzo for Bogi trade. DD still has room to grow as a player and has a higher ceiling than Bogi IMO. He plays solid D, gets rebounds. He’s a bit gritty and super athletic. He’s a bit streaky with the outside shot but I think he’ll continue to improve there. His performance in the NCAA championship game was epic.

There has to be an option C