Remember how DaQuan Jeffries cracked the Sacramento Kings rotation last season? Harrison Barnes and Buddy Hield were out because of COVID-19, clearing a path for Jeffries, a two-way player in Stockton, to display his craft. Jeffries seized that opportunity, advancing from a two-way contract to a two-year contract.

Kyle Guy, Sacramento's 55th overall pick in 2019, could experience a similar trajectory. In Sacramento's second preseason game of the year, Guy got the nod from head coach Luke Walton as Cory Joseph, the primary backup at point guard, dealt with back soreness.

Joseph's absence propelled Guy into first-quarter minutes; in game one on Friday, Guy didn't debut until the fourth quarter.

We know Guy can shoot; it was his established trait in Virginia, and he translated it to the G-League, shooting a blistering 40% from deep on 9.6 attempts a game for Stockton. The real test for Guy lies in advancing that shot into the NBA. Can he prove he's not a G-League-all-star/fringe-NBA-player guy? Can he mature into a rotational guy? This game shifted that needle slightly forward.

Portland also knows Guy can shoot; Enes Kanter and Carmelo Anthony both crowded him at the arc. For Guy to establish himself in the league, he'll have to spice things up from time-to-time, which he does here.

Guy sets a fake pindown screen, and instead, leaks out himself as Glenn Robinson III traverses the baseline to clear room. Anthony dismisses tagging Frank Kaminsky as the roller, opting to join Kanter in blitzing Guy. Guy has three choices once he receives the ball back: 1. Take what the defense gives you (bounce pass to roller)  2. Shift the ball to Tyrese Haliburton the arc (risky, the defender can jump the lane) 3. Hoist a three (imprudent)

Guy delivers a perfect bounce pass between the two not-very-good defenders, and Kaminsky repays Guy with an assist.

This play is reminiscent to the one prior, though this time, Guy comes off the pindown and Haliburton sets the screen. Guy receives the dribble hand-off and notice the clever pump fake - that fake is just enough to catch Jusuf Nurkic out of position as he leans to contest, prompting Guy to supply another crisp pocket pass. Kaminsky reimburses Guy yet again. Delivery? Last name Guy? Huh, maybe the Kings have their perfect Pizza Guy for the season.

Okay, maybe not all of Portland knows Guy can shoot (*ahem* *points at CJ Elleby*). This is just a simple DHO between Robinson and Guy; Elleby fails to switch, and Guy exploits it. Guy won't always receive this look, but it's imperative, for his sake, to knock them down when the opportunity arrives.

When I talked with Stockton head coach Ty Ellis in May about the team's season, I asked him about Guy's ceiling.

Ellis said, If you like Seth Curry, you will love Kyle Guy. Ellis pointed out that Guy was wearing comparable shoes to a young Seth Curry in terms of how he evolved into the rotational player he is now. Curry's body favors him better than Guy, but if Guy's path continues to rival that of the former King, that's a huge win. But let's not get too ahead of ourselves just yet.

Here's another three-point attempt by Guy. Some defensive miscommunication by Portland permits Guy to sneak around the baseline into a catch-and-shoot opportunity. That's what you want to see from him, despite the miss. He doesn't need the ball to work, so you can feel comfortable playing Guy with Haliburton off the bench if necessary.

Here's another catch-and-shoot attempt. Haliburton rounds the corner after receiving the DHO and Anthony is caught ball-watching. The 12th overall pick in 2020 kicks it out to Guy for a clean look, but unfortunately, it rims out.

I've previously questioned if the Kings, who are exiguous in playmaking, will sign another point guard. To this point, it's ambiguous if Guy is a long-term King. This is just one preseason game, but there's some confidence in the fact that Guy did this against Portland's prominent role players. As we near the final two preseason games, sign me up for all the #KyleGuyMinutes.

I’m glad he bounced back, Guy was really struggling in the first meeting. As were most of his teammates, to be fair.

I don’t know what anyone will be able to do with him on the defensive end, but if he can giveth more than he taketh away, he’ll stick somewhere.

Is there any sort of comp to his physical build and potential(in the NBA), that we can point to and say he could make it in the league? I think he can probably shoot lights out against less physically imposing competition, but I think his frame, size and strength lend to a quick career. I’d love to see him as a guy that comes in to nail a couple 3s to seal close games. 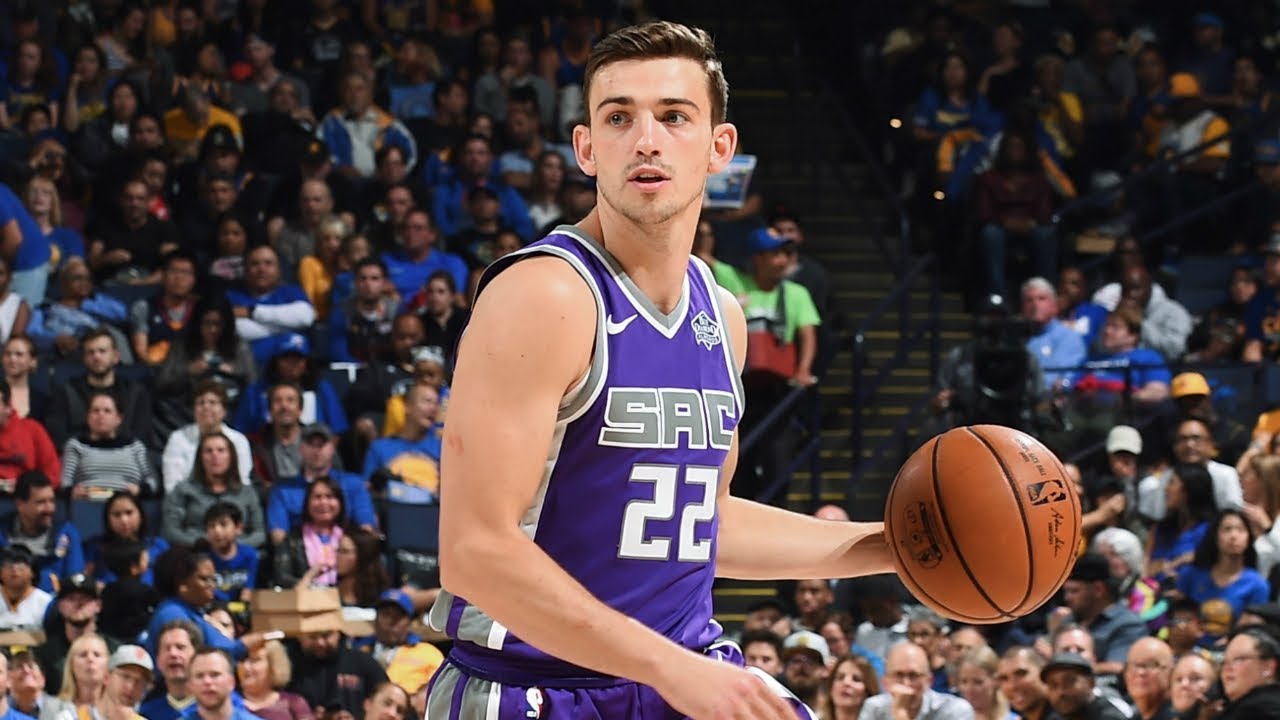 Seth Curry is whom I was thinking about. Solid 8 man rotation player who gets picked on a bit on the defensive end.

With this supposed to be a “developmental” year for the young guys, I can’t see why Luke can’t provide Guy atleast 10-15 mins every night.

Maybe he can become Jim Les

Kyle was fun to watch in the NCAA tournament for Virginia as more of a shooting guard. He was the NCAA Final Four most Outstanding player. Combo guards can make it in the league. He has been compared to Seth Curry.

I doubt Guy has much of an NBA future, entirely due to his lack of other useful skills. If Guy could become a competent facilitator and ball-handler, he might find a place somewhere. His defensive liability will forever prevent him from being anything more than a sparkplug coming off the bench.

I watched Ramsey for 3 mins in the 1st Port/Sac game and immediately knew he had surpassed Guy on the depth chart because he offers so much more as a player. NBA roster spots are a premium that don’t often go to one-trick ponies with severe limitations.

Last edited 1 year ago by NorCalKingsFan
0

I think it benefits Guy to play next to Haliburton who can bring the ball up the court and focuses more on playmaking. Also, Hali can defend whichever guard has the most offense on the other end.

Last edited 1 year ago by cunimus
0

I have no problem giving him Corey’s minutes.

Meh, only 14 pts versus the Blazers. Guy was obviously holding back!

the eye test suggests Guy has made major strides from last season. Let’s hope he continues to develop.