With the NBA draft rapidly approaching and the unconfirmed rumor mill heating up, the Sacramento Kings have recently been linked to a couple of lottery point guards, a bit of a surprise with De'Aaron Fox on the roster. On Thursday morning, Marc Berman of the New York Post reported that the Kings are "very interested" in Alabama point guard Kira Lewis Jr., while Bleacher Report's Jonathan Wasserman shared that Sacramento has also shown interest in international prospect Killian Hayes.

Those tidbits offer an interesting debate for a team like the Kings. If a point guard or combo guard is the best player available, should they ignore potential fit issues with purported franchise cornerstone De'Aaron Fox? Monte McNair was a part of a two-headed guard monster in Houston, while the Portland Trail Blazers and the Oklahoma City Thunder have also enjoyed success with a similar dual-guard concept. A franchise bereft of young talent should perhaps worry about ceiling now and fit later.

If the Kings are looking at that sort of plan, three guards stand out in the lottery. While Killian Hayes will almost certainly be off of the board unless Sacramento moves up, the previously mentioned Kira Lewis Jr. will likely be available at number 12, as well as Kentucky's Tyrese Maxey and possibly UNC's Cole Anthony. Each of these guards offers their own major strengths and major weaknesses.

Lewis Jr. was arguably the fastest player in college basketball last year, and his elite speed would be fascinating next to De'Aaron Fox. A fast break run by that duo would be almost indefensible, but the Alabama stud is also on the short and skinny side, measuring in at 6'3" and 160 pounds. There's no realistic path toward him defending opposing shooting guards in the next few years, meaning Fox and Lewis Jr. would either need an elite perimeter defender to help make up for their struggles on that end of the floor, or Lewis Jr. would have to spend most of his time backing Fox up, rather than playing next to him. Drafting Lewis Jr. would be a huge roll of the dice in favor of outscoring every opponent every night.

Tyrese Maxey is probably the best defender of any of the guards available in the lottery, but his shot is also the most questionable. Despite putting up solid three-point shooting numbers in high school, Maxey only nailed 29% of his attempts from deep in his single season at Kentucky. With Fox's outside accuracy severely regressing in 2019-2020, the pair might find clogged defensive lanes at all times when playing together, as opposing teams would have no need to step out and challenge three-point attempts. The Kings would be gambling on Maxey's defensive potential and ability to attack the rim in the half-court to outweigh his lack of an outside shot, at least until he or Fox could prove themselves as shooters. He represents perhaps the most balanced, two-way available in the late lotto.

Cole Anthony is a player who most thought would be a lock for a top-5 pick when the collegiate season started last fall, but his personal and team's yearlong struggles saw his draft stock plummet continuously. Anthony was an inefficient, high-volume scorer throughout his time at UNC, but his ceiling is likely higher than that of Lewis Jr. or Maxey, even though many mock drafts now have him picked after either of those guards. If Anthony is selected by the Kings, they'll be gambling on his potential upside rather than his pure production in college, not a bad strategy for a team desperate for high-level talent.

If you had to draft a point guard with the 12th overall pick, who would you prefer the Kings take: Kira Lewis Jr., the smaller speedster, Tyrese Maxey, the defensive-minded combo guard, or Cole Anthony, the falling knife with loads of potential? 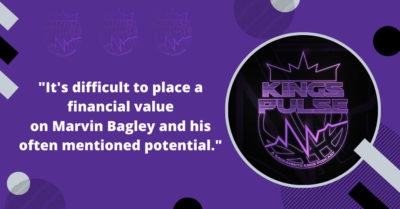 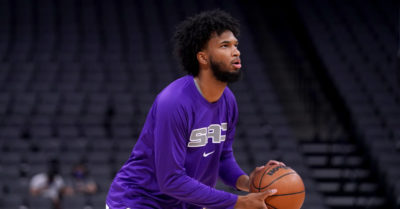 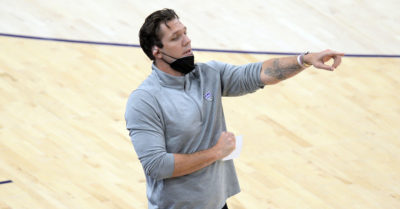 Kira.
We’re going to suck no matter what, so we might as well be fun to watch.

Try to trade up to get Killian Hayes is probably the best…..
can create his own shot, decent shooter, NBA ready…

While I think Kira is just too skinny…….ceiling would be a backup PG

While cheating a bit given how the question was framed, this would be the best scenario and the easiest to envision working. Hayes has the size and strength to play SG, even if he might not be a very good defender at first.

Maybe Maxey could as well (as more of a combo guard), but Lewis and Anthony wouldn’t really fit next to Fox. Now you do take BPA. And perhaps the FO doesn’t view Fox as part of their long term plan, so it may not matter if we stay at 12. But the pairings aren’t as good of a fit as Hayes.

1) Tyrese Maxey has no business being taken at #12. If you want him, trade down and get additional assets.

2) Kira Lewis is Fox lite, so I really don’t see them playing alongside each other. Defense will sag into the paint and dare them both to shoot, especially when they are on the court together.

3) Cole Anthony is definitely the falling knife right now. You’d need a lot of confidence in picking him, but he too is someone that is a reach at #12. Trade down for him if he is your choice.

4) Hayes is someone I can get behind to run alongside Fox, but his stock is on the rise and would require the Kings giving up assets to reach him. He is likely going top 5. I still question his shot, but Dumars may have McNair’s ear on this kid.

5) From all that, if a guard is someone you want to put alongside Fox, has the 2 way chops to defend bigger players and shoot from deep, can play make like a PG, and is someone you might be willing to trade up for….MAKE IT HALIBURTON. He or Hayes will be there at #6. Go get that pick from Atlanta.

If we can trade up to 6 and get Hayes or Haliburton, I’ll be thrilled. Although there are 4 or 5 guys at that slot who I would be happy to take.

I agree. I’d add Okoro and Avdija to that list for sure, but if it’s a guard the Kings want, I’d aim for Haliburton.

Fun fact, Haliburton is taller (or as tall) as Okoro and has at least a couple inches on him in wingspan.

The point, you could theoretically play Haliburton as a “SF” with two other guards.

Situationally, you 100% could. But also worth noting that Okoro weighs 50 pounds more than Hali, which will certainly help with stronger SFs.

I realize you weren’t directly comparing the two, but the point being Hali can play some SF and be very switchable, but I’d imagine he’d struggle with stronger SFs. Although, with more teams rotating strong SFs down to PF that may not be as much of an issue.

Couldn’t have said it better. I also wouldn’t mind trading back for a chance at someone in the backcourt along Fox and someone like Poku

I agree 100% with your assessment and overall points as I feel the same way.

That said, one tiny nit here is that in this flat of a draft, I am not sure there is really such a thing as drafting a player too high or that we can count on trading down and still having them available.

Now, I think you can say that for someone like Maxey – given the risk/reward, upside/downside, probability of success, etc. – you hate using a #12 pick on them. But I don’t think some of the talent tiers are as clearly defined this year as in other drafts. And I think that if you want someone like Maxey or Anthony, you might have to take them at 12, because I don’t think it’s a guarantee they last much longer even if you did trade down to 16.

While I realize that in any draft, any player can go much higher than expected, I do think in this type of a draft, a guy like Anthony mocked around 20 could much more easily go #13-14 if a team wants to gamble on his upside than someone like Leaf, Giles, or Ferguson when we had the 10 pick in 2017 (i.e., we could have traded down and felt pretty safe they would be available).

The flat draft can really work either way. You can think, “hey, I better go get my guy because he could go higher than we think” or you can think “we like players A, B, & C a roughly equal amount and we’re confident at least one of them would still be there at a later pick.”

That said, I’ve certainly been burned before. In 2016, I was pushing for a Prince, Bembry, Levert 1st round. Turns out they were all gone before the Kings second pick.

I agree, but I think what you are identifying is two different strategies.

If you have a guy, you need to get them and can’t count on trading back (like when Petrie drafted Hedo and on draft day some people were saying it was a “reach,” but then rumors came out other teams were ready to draft him early).

If you have 3 players you are relatively indifferent between and see as fairly fungible, then you can trade back and just be happy to get any of them.