Welcome back to Quarantine Rewind.

Last week we re-visited Gavin Maloof’s passionate ramblings after the Sacramento Kings selected Tyreke Evans with the 4th overall pick in the 2009 NBA Draft. We’re sticking with the draft this week, but jumping to 2014 where the Kings selected Michigan Wolverines guard Nik Stauskas with the 8th overall pick, and fortunately for us, Grantland (R.I.P) was around to document the whole thing.

For those unfamiliar with Grantland, I will lazily copy/paste the Wikipedia introduction for you here: Grantland was a sports and pop-culture blog owned and operated by ESPN. The blog was started in 2011 by veteran writer and sports journalist Bill Simmons, who remained as editor-in-chief until May 2015. Grantland was named after famed 20th-century sportswriter Grantland Rice. On October 30, 2015, ESPN announced that it was ending the publication of Grantland.

Grantland was awesome. Those are my words, not Wikipedia’s.

The Kings granted Grantland access to their entire draft process in 2014, and for Kings fans, it was a fascinating look at our new ownership group and front office.

We were so accustomed to the Maloof way of doing the bare minimum at all times that Vivek Ranadive’s new Jazz band, NBA 3.0 approach was kind of refreshing. Vivek wasn’t afraid to try new things, and he desperately wanted to change the Kings’ reputation around the league. If this short documentary didn’t age so, so, so, so, so, so poorly, he may have accomplished that.

You can see former Sacramento Kings General Manager Pete D’Alessandro haphazardly trying to negotiate a trade with the Philadelphia 76ers for Joel Embiid. If that was the conclusion to Grantland’s documentary, the Kings come out of it smelling like roses with one of the best young players in the NBA on their roster.

Instead, the Kings drafted Nik Stauskas and nobody featured in this documentary outside of Vivek Ranadive is still with the organization.

Unfortunately for our viewing today, most of the Grantland short has disappeared from the internet. The only footage left on YouTube is part 3, but the good news is it does include the infamous ‘Nik Rocks!’ scene.

Hindsight is 20/20, of course, but it’s kind of incredible how often Pete D’Alessandro is wrong in this thing. Nobody comes across well, but Pete… yikes.

It’s worth noting that Ranadive has since made an effort to distance himself from the Grantland footage. Like a disgraced castmember from the Real World, he claims ESPN gave him a bad edit.

So what happened (in the 2014 draft in which ESPN cameras were allowed into the draft room), and again – these guys didn’t want me to talk about this. I’d had another player who had tried out for us that I had liked, and that I had thought was great. And by the way, I’ll tell you, it was (Orlando Magic point guard) Elfrid Payton. But everybody else wanted another player – (Nik) Stauskas (now of the Philadelphia 76ers). And so they told me to say (Stauskas), and obviously I’m not going to say that I wanted Payton but they picked Stauskas. I made a big deal of all-for-one and one-for-all, so ‘Whatever you guys decide, I’m going to say yeah to Stauskas.’ That got put on camera, but what was I going to say, that ‘Hey, I don’t agree with their choice?’ Even now, with Vlade, I have a private joke with him, that if his choices don’t work out with him in a couple of years, that he’ll be shaving his head.

I don’t want to put the cart before the horse here, but I think Vlade Divac will be shaving his head soon.

You keep saying Nik Stauskus. I think you mean

Always bugged me that people stole that photo from my Twitter and never gave credit. That picture was plastered all over the internet and someone who ripped it from me got all the love

I wonder what was going through Mike Malone’s head during the War Room.

“… makes me want to regurgitate.” Isn’t that what this article is doing?

Leadership 2.0: When all else fails, blame others.

Ironically, Payton is only an OK NBA player, so even Vivek’s hindsight isn’t great.

Outside of about 10 players, half of which reside in the “ok NBA player” pool, that draft was exceptionally Meh. Embiid stands alone, really, as a franchise cornerstone. Smart, Nurkic, Capela and Gordon were the remaining cream of the crop with a handful of notables along the lines of Dimwiddie, Saric, Randle, Exum. A whole lot of Meh, none of which would have made much of an impact on the Kings then or now. And for what its worth, Vivek (along with probably every other team in the NBA) at least made Petey D. do his due diligence in calling the 76ers. You could tell Petey D. was trying real hard on that convo, too…lol

You left out arguably the best player in that draft! I’d say that draft was roughly average for the past decade. Wiggins and Parker sucking are a big hit to the overall grade, but there are a lot of useful players in that draft class, including our own Bogdan Bogdanovich.

Yeah, talk of strong or weak drafts generally refer the to number of elite top of the draft guys. Obviously, having Giannis and Gobert go in the second half of the round can make up for A LOT.

“I don’t want to put the cart before the horse here, but I think Vlade Divac will be shaving his head soon.”
I don’t want to beat a dead horse, but Vlade’s head should have been chopped off (metaphorically speaking) years ago

The thought of a Kings mini documentary made me wonder about the never released 30 for 30, “Down in the Valley.” I’m aware of the KJ stuff and I don’t have much hope that it’ll ever come out, but never watching it is going to always bother me (kind of like the baseball field behind Arco.) Quarantine is the time to release it!!!!!!

Carmichael Dave streamed on Pericscope the Playing to Win documentary somewhere around late March. And while he streamed it he would pause it on occasion to give some commentary and behind-the-scenes stuff. I was glad to be able to finally see it for the first time.

Ok I’ll check that out. Thanks

I don’t think the Periscope link is up anymore, because Dave only had it up for a few days. You can always check his Twitter, but I don’t believe it is there unfortunately.

Sidenote: Do you guys have any policy or plans about linking to your work on other sites. I was going to link Richard’s article from the Bee, but I wasn’t sure if there were any limitations.

I don’t think Stauskas was even on an NBA roster this season, was he?

He was in Turkey last year and intentionally fouled a guy while in the penalty when the game was tied with only a couple seconds left.

….So that’s what happened to ponytail guy! He coached Sauce in Turkey! He looks pissed.

Rain drop, drop top, we be converting on the pick swap. #ThanksSac 😜

Baskonia is a spanish team, it’s not in Turkey. However, apart from the dumb foul here, he averaged something like 9 points, 2 rebounds and 2 assist with 40 3P% before being waived…

Cant’ wait for the 6-year rewind on the 2018 draft! I predict more good times! “I wanted Luka the entire time but I had to put on a good face for the sake of the franchise.” – Vivek sometime in 2022.

And the 2019 draft too because, as we know from our local media overloads, the last thing this team needs is more young talent!

Wasn’t that implied as the reason why he contemplated firing Vlade now?

There are nine nominees, and none are from Sacramento.

That’s your Sacramento electronic sports media in a nutshell right there.

I’m interested to see what, if anything, changes once the MLS version of Republic FC ramps up.

There are nine nominees, and none are from Sacramento.

I wish Jiminy Glick would do an interview with Vivek Ranadive.

Upon hearing Vivek proclaim that he wanted Elfrid Payton while those smarter people he surrounded himself with wanted Nik Stauskas:

Oof. I want to watch this but I also don’t.

Lets have a quarantine rewind.

Anyone else imagined an alternate universe where we took Payton in 14, Isaac in 17, and we now look like the Orlando Magic? In other words…not better. And Fox-less.

Just me? Thought so.

We’d still have FOXX, though… 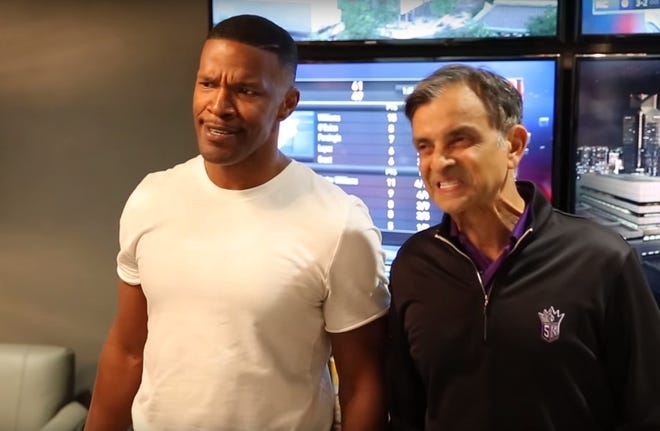 Of course, in that universe Payton would have been on his 5th season so he’d probably be gone or, at least, we wouldn’t be worried about taking the ball out of his hands, and we’ve have Isaac as a long, tall SF/PF Bagley would probably be out of the plans, so we may very well have Doncic. Not to mention, the Kings reportedly like Mitchell but didn’t take him because they took Fox. So here the Kings take Isaac and Mitchell in 2017. In this case, with Doncic and Isaac in the fold we definitely don’t trade for and overpay to retain Barnes. So let’s call this “alternate universe” trade-off a Fox, Bagley, Barnes swap for Payton, Doncic, Mitchell, Isaac. And, of course, Payton looked like a potential keeper his first couple seasons, so they definitely wouldn’t have been throwing him in on the Sixers deal. So maybe no Sixers deal which, at the very least, retains our 2019 1st. But with Mitchell now in the fold, let’s assume they make the same trade the Magic did (to the Suns for a 2018 2nd, #41) Now, with minimal assumptions (obviously, butterfly wings say all of this would likely be different) we’re looking at a core of:
Mitchell
Hield/Bogdan
Doncic
Isaac

And because I like these kinds of things, let’s make some draft picks with the 2019 that we keep in the Sixers deal and the 2018 2nd from the Payton deal. Looking at who was available at those picks and the core above with holes at C and to a lesser degree PF and PG, based on my personal big board at the time:

So let’s slot them in:

So there’s your BHE alternate universe based on taking Payton in 2014 instead of Stauskas leading to Isaac instead of Fox. Still a hole at C, but there’s no reason we couldn’t still pick up Holmes.

but i thought he was the next Klay Thompson?? they even brought in a big group of data geeks to say so

I like how Vivek’s defense is “well, I liked Elfrid Payton” who also….sucks.

[…] highlighting Gavin Maloof's infamous Tyreke Evans promo and Grantland's damning 'Stauskas' draft footage in previous editions, I thought it would be a good idea to balance some of that negativity out with […]