With the Sacramento Kings not having any new first round picks to display following the 2019 NBA Draft, all eyes shifted to Kyle Guy as the rookie who could make some noise to get into the first team.

Not to discredit the other two second-round selections by the Kings, but Guy clearly held the advantage with his flashy three-point shooting he displayed at Virginia. Plus he has a fun name.

Justin James being picked 40th overall when there was an argument to be made that he could've gone undrafted made fans uncertain about the pick (though he definitely showed promise once he hit the floor). Vanja Marinković would be staying in Europe to play ball, so there wasn't much immediate hype there.

Guy wasn't a lock to make the Sacramento roster. Most guys picked 55th overall usually don't have any expectations. But this guy had an interesting dilemma.

The 6'3" guard doesn't possess the ball-handling abilities that would consider him to be a primarily handler. Having to beat out players like De'Aaron Fox, Cory Joseph, Yogi Ferrell and Bogdan Bogdanovic is an incredibly tough task for a second-rounder. But his small frame doesn't allow him to succeed as an off-ball guard either, at least not immediately at the NBA level. Playing off-ball with Ty Jerome at Virginia is one thing, but trying to replicate that success right away in the big leagues is unrealistic.

That's where the Stockton Kings came into play. Relocating from Reno to Stockton has definitely made things easier for the franchise and as Stockton is still relatively new to the G-League, one great way to build some hype for a city that previously didn't have basketball is having a flashy rookie become the face of it.

Though Stockton's roster was filled with guards like Gabe Vincent (who later signed with Miami), Cody Demps, Marcus Graves, Isaiah Canaan and combo guard DaQuan Jeffries, Guy did hold his own in hefty minutes (36.9 minutes per game).

Guy averaged 21.5 points per game, despite attempting 17.4 shots a game and only converting on 7.2 of them. To nobody's surprise, the bulk of his attempts came from beyond the arc. To nobody's surprise again, Guy saw success from that range, shooting 40% on 9.6 attempts a game. Yeah, he let it fly often and why not? It's a great environment to utilize your strengths effectively while not having to deal with a ton of pressure if mistakes are made (see Ben McLemore vs. Kawhi Leonard).

Guy's hunger for buckets became evident quickly as he finished multiple games with 30-plus and 40-plus point performances, such as dropping 45 on the Iowa Wolves.

Guy was constantly aggressive on offense. He would pull up from anywhere or on anyone and still knock it down with confidence. Guy also sought to penetrate the defense by attacking the rim and proved to be a decent finisher there (54-97, 55.7% in the restricted area), but where he tended to fall off was shots in the paint and just outside the paint. Guy went 52-129 on shots in the paint (40.3%) and 19-65 on mid-range jumpers (29.2%).

Stockton lacks true length on the roster so guys like Eric Mika and Kevin Young usually were the ones with the responsibility to score inside, but I'm not going to fault Guy for trying to be aggressive for getting down low more often.

He clearly understands his strengths lie beyond the arc, but taking his game to the next level does require an ability to extend his arsenal inside the arc. Otherwise, he would be too predictable to guard and his shot essentially becomes useless.

We still don't quite know where Guy's trajectory is headed. He's clearly fit for the G-League. He's proved that in one year, or at least until COVID-19 shut the league down, but he will have to prove he's a player that's built for more. For many players, they get stuck directly between the lines of an All-Star G-Leaguer and an NBA caliber player. We just saw it this past season with Frank Mason in Wisconsin. His stats are absurd in the G-League, but he failed to establish himself as a consistent and capable backup to De'Aaron Fox in Sacramento, despite many chances.

While COVID-19 is making it difficult for the NBA to know whether it's safe to return to some form of action, if any, any decision made about a possible return will have a domino effect on the G-League. Until then, Guy most certainly had a fun rookie campaign in Stockton and helped bring more attention to a team with underrated talent. Let's see if he can take it to the next level soon enough.

I think he fall fall into that Frank Mason category unless he can really improve his overall game. Maybe there is a spot for him with Yogi leaving, but he will most likely have to compete with whoever the King draft this summer.

I sat courtside for summer league last year and he’s legitimately 6’3″ (ish) but the dude is (or at least was) *tiny*. I’d be shocked if he weighed 165 lbs. If can put on some bulk I think he could have a Seth Curry like career (as a ceiling) but man does he need to hit the weightroom (and buffet line) hard.

I’m going assume that he had a grande super burrito and chugged a gallon of water before the combine. He was noticeably taller than Frank Mason and they were interacting a lot but Frank’s height may have been exaggerated some as well

It seems to me there are two measurements. One in shoes and one without shoes. FWIW, Guy’s in shoe height was 6’2.5″

I like the kid, but if he ever makes the core rotation for the Kings, I’m afraid that it will say more about the state of the team than it does him.

This is where I’m at too. You read profiles of him and can’t help but root for him. Reminds me of David Stockton. Not in how he plays, but in that he’d be a solid NBA player if he was just a few inches taller.

After watching the 45 point highlight clip my initial take from it was, I can’t wait for Deuce to replace our current play-by-play guy

Deuce and Mo for the win

Not for nothing, but if you ever looked like this – 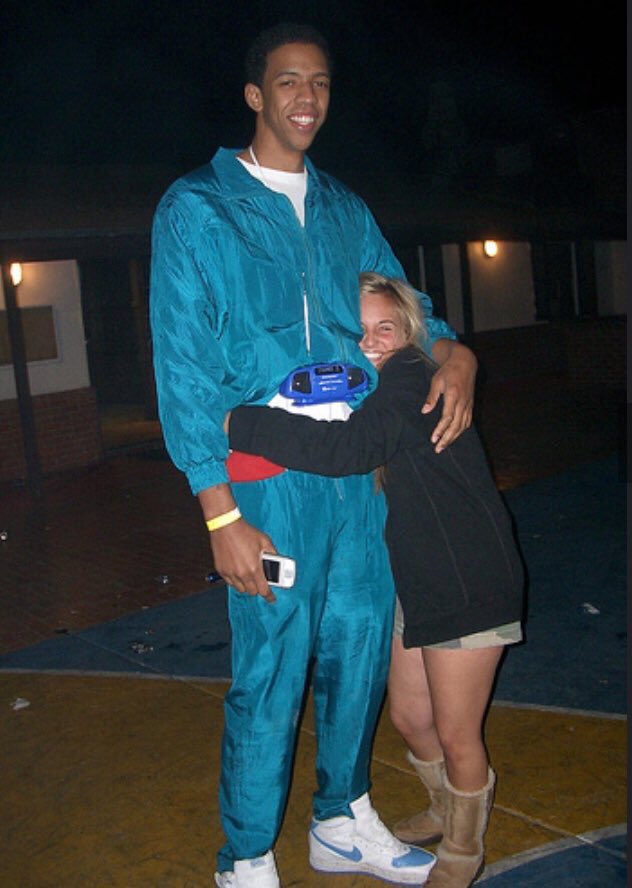 I could see the NBA shifting closer to the minor league baseball model where spending some time in the G league becomes more and more commonplace for players who are not studs from the get go. The dirt in college basketball continues to come out and once big time programs are forced to play by the rules, whenever this eventually happens, the best prospects will be even less likely to choose college over the other options. The return of players entering the the draft straight out of high school again should also have some effect on this. I envision teams selecting 18 year olds, especially with 2nd round picks (*cough cough,) with the intention of developing them over the course of a year or two before they are ready for “the show.”

Think he at least deserves a shot to show whether his shooting can translate to the NBA and whether his deficiencies are too much to overcome. Did he get any real minutes in any game last year?

Not saying he’s going to be good, but just that we won’t know until we give him 8-10 minutes for a couple games in a row (maybe in blowouts) so we can properly evaluate him at the NBA level.

As long as his defense is adequate I agree that he deserves a shot. If he’s Jimmer-bad at defense you can’t put him on the court unless the team is in full tank mode, though.

Limiting his mistakes (which I thought he did a good job with his limited minutes in Sacramento this past season) and developing a second facet whether that be a floater, better handles / passing, etc. will be crucial. The long ball is a hot commodity right now so he’s got a solid building block but even Buddy hustles for rebounds and works his tail off defensively (on most plays) and is still learning how to maximize his range now that team defenses have learned they need to focus on him.