With the NBA season preparing to resume, the folks on The Ringer social media team decided to present a poll. Who would win the eighth seed in the West? Such a simple question, and yet The Ringer still managed to get it wrong.

For anyone (such as The Ringer) who forgot, the Sacramento Kings are currently tied with the New Orleans Pelicans for the 9th seed in the West, ahead of the Portland Trail Blazers.

Sadly this is not the first time the national media has forgotten about the Kings. But for The Ringer, which holds itself as better for Sports Fans than ESPN, it's an especially egregious oversight.

I mean, it's not like the standings are a secret. They're readily available. A simple google search is all it takes.

Will the Sacramento Kings win the 8th seed? Probably, but that's not the point. The point is that it's absolutely insane for a supposed national sports site to exclude them. 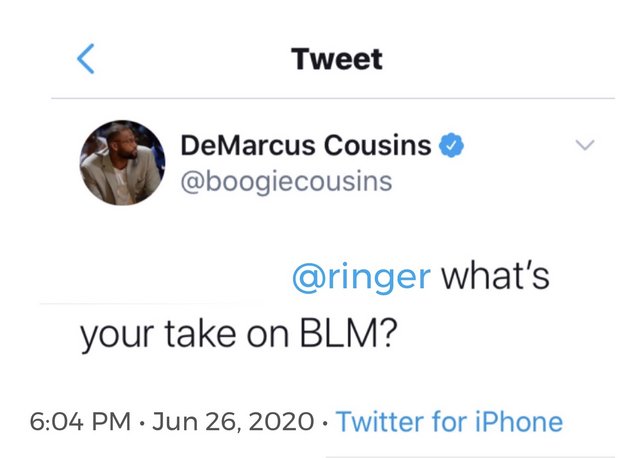 As stupid as the Ringer is for leaving us off their poll (and ESPN for cutting to commercial before showing the Kings schedule along with the rest of the teams fighting for the 8/9 seed), it’s nothing new coming from the national media. We’re at the point (and have been here for years now) where we have to make people talk about us. We can’t just be in the conversation, we have to be the conversation, if that makes sense. Because if we’re just apart of the conversation, they’ll look over us until we give them a reason not to.

So, Buddy, Fox, and everyone else getting fired up over this (including myself), but more so the players on the team, go out and prove why they’re stupid for leaving us out. Use it as fuel to the fire.

Agreed about the recognition, national media always wants to overlook the Kings. But we haven’t really given them a reason to pay attention outside of the mini-surge last year that was showing improvement. I think Fox is going to use this as motivation but not sure about who else on the team. Maybe Holmes if his shoulder is good to go? Barnes just probably wants a good shave by now.

In fairness to the Ringer, I too had forgotten the Kings existed.

They are pretty forgettable

The Ringer has made a habit of thinking certain segments of the population don’t exist.

*sweating profusely while ripping my shirt off*
who thumbs downed me? Show yourself!

Last edited 2 years ago by RORDOG
3

Welcome to the Party Pal

The disrespect!
What have we done to deserve this, other than having the longest play-off drought, one of the worst run franchises and perpetual bad teams over the last decade plus?
Almost nothing!

and they are lumping us in with those sorry Spurs? It’s a disgrace.

Eh, Twitter polls have a max of 4 options, I believe. They probably just decided that MEM, NOP, and POR have the best chances, while on the next tier, the Kings chances weren’t really meaningfully greater than the Spurs’. Since they couldn’t add the Spurs and leave off the Kings due to records, they just left off both. I’m sure if Twitter allowed 5 options they both would have been on there.

Too thoughtful. You do not pass GO, do not collect 200$, head straight to internet outrage jail.

Judging by the downvotes, this innocuous comment may be the worst in the history of KH.com.

Typical response from one of the negativist’s! Wait did we retire that with STR?

I REALLY hope the players use this (and other recent slights) as fuel & come out swinging in Orlando.

Making the playoffs will feel that much better if the team is putting egg on everyone’s face in the process.

Eh, it’s The Ringer. Let me know when it’s a publication that matters.

Last edited 2 years ago by Kingsguru21
2

Until I got a noice that players tested positive, I forgot about the Kings

To quote Dr. Dre…..’Sacramento…..Sacramento where you at’