Prior to the pandemic-induced NBA suspension, the Sacramento Kings were one of the hottest teams the league. We've been discussing the same ten things over the last three months, so I'm sure you're familiar with the talking points by now - the Kings have won 7 of their last 10 games, and sit just 3.5 games behind the Memphis Grizzlies and the 8-seed in the Western Conference.

I'm self aware enough to realize that celebrating the fact that you're only 3.5 games out of a playoff spot is silly, but when you've lost as much as the Kings have lost over the last 13 years, you take what you can get. The Kings were playing reasonably well and making a legitimate playoff push.

The NBA has recently announced its plans to return, and thus the Kings will resume their playoff push in Orlando at the end of July in the Disney Bubble League. They'll have 8 games to secure the 8th or 9th seed in the west and earn a spot in the short playoff play-in series. Aside from the Grizzlies, the Kings essentially have as good of a shot as anyone else.

Zion Williamson and the Pelicans were the favorites here in our March forecast, but now it looks like a tight race between New Orleans, Portland and Memphis.

Even though the Blazers are 3.5 games behind the Grizzlies (currently in the No. 8 spot), a couple of things help their case: Injured big men Jusuf Nurkic and Zach Collins are expected to return, and the NBA using win percentage gives them an edge in tiebreakers.

Given the parity here, a play-in series looks likely.

Notably missing from that short list of competing teams is the Phoenix Suns and the Sacramento Kings. The Suns currently sit 6 games out of the 8-seed in the Western Conference, and with just 8 games remaining, they undoubtedly have a tougher road ahead of them. The Kings, on the other hand, have a better record than the Spurs.

In fairness to ESPN's panel of experts, if they are being polled in a way where they can only submit one prediction for the 8-seed and one prediction for the 9-seed, I wouldn't give a nod to the Sacramento Kings, either. But I'm not going to let semantics get in the way of perfectly good bulletin board material heading into the most important 8 games the Kings have played in over a decade.

How I feel about this incredibly minor offense doesn't really matter, anyway. It's infinitely more interesting that the Sacramento Kings are seeing it as a clear sign of disrespect, and I love that.

Lmao know we use to that!! It’s kooooool thooooo. We gone be ready

I think I speak for everyone when I say nothing would make us happier than the Kings proving both ESPN and myself wrong. Go make the playoffs, Kings, I dare you.

This would be a lot more hurtful if it came from an entity that actually covered sports.

Go make the playoffs, Kings, I dare you.

Last edited 2 years ago by Klam
16 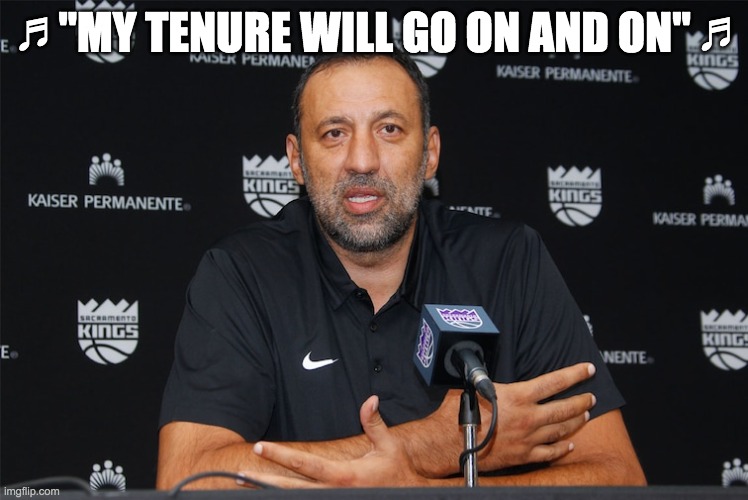 Last edited 2 years ago by Kosta
7

ESPN sucks…….I doubt they never watch the highlight of Giles……..if they did, we gonna be 100%

Last edited 2 years ago by HongKongKingsFan
7

If Giles was in a…Lakers uniform, that play would be everywhere

If Giles was in one of those terribly ugly yellow/purple uniforms, I would cry.

If there’s one thing that ESPN doesn’t care about it’s the Sacramento Kings. It’s also a pretty safe bet that the Kings won’t make the playoffs because, well, they never make the playoffs. I actually think they have a decent shot at getting into the play-in game because they’re schedule is pretty easy all things considered. But as with everything else, the Kings have to actually do it before I believe they can actually do it.

I am with you that the Kings should be able to get into the play-in game, but if they just able to get the 9 seed or lower seed, it becomes extremely difficult to get two consecutive wins against the 8th seed or the upper seed, in order to finally get into the playoff.
Let’s hope they can play with full strength, and concentrate for all 8 games, don’t just settle for jump shots, try to draw fouls as much as possible, hustle is needed for all 48 minutes. (and of course, to play Giles)

ESPN LOVED the Kings back when they were good and exciting. We even got a good amount of positive press last season and in the offseason when we were still bad but playing fast and fun.

ESPN doesn’t care about any team any further than their ability to draw ratings.

Well sure but crap teams don’t often draw ratings. So, yeah the Kings are irrelevant in that regard.

Lazy reporting, but no surprise here… The Kings will be considered incompetent by the national media until they prove otherwise. Good bulletin board material for De’Aaron, but the slight has been earned with many years of poor play.

It begs an important question: Do the Sacramento Kings actually exist on the NBA landscape?

In the NFL, every fan knows every team. In the NBA, teams like the Kings can be forgotten. Right now our NBA landscape existence is more like perpetual jobber Iron Mike Sharpe in his heyday.

I get it. I mean, as far as I can tell they asked each member of their panel to pick the one team they think will get the 8th seed. They didn’t ask them to rank them, or project likelihood for each team. This isn’t an odds projection. They just said choose the one team you think is most likely. I can see none of them choosing the Kings. Nobody chose the Suns either. I’d question the guys that chose the Spurs, but I can see the rationale of believing in Pop and the Spurs mystique.

I mean, how many people here think the Kings are THE most likely team to get the 8th seed?

The article doesn’t even list the panel, unless I’m missing that. Maybe I’m picking nits here, but it would be nice to know if it was 100 or 5 on the panel, considering how many predictions were made in a lengthy article.

Maybe they just assume we all know who is on the panel, IDK.

This. It was a remarkably uninformative note which is why I can’t really get worked up over it.

Nah, I don’t really see any reason to get fired up over random opinions and projections. Ultimately, they don’t mean much beyond being decent conversation starters.

Pretty big difference (to me) between a conversation and getting fired up. 🙂

Yeah, I was wondering how big the panel is too. I mean, a smarter person than I could probably make a reasonable guess based on the percentages provided. Looks to me the “panel” was probably some factor of 34 people.

Last edited 2 years ago by BestHyperboleEver
8

Maybe the poll was done before the Spurs announced Aldridge was out for the season?

I assume it was.

If any team has the potential to surprise anyone out there, it’s the Kings. They have beat many good teams this year. They can beat anyone and have! When they click, they win! Nothing says they can’t find some chemistry for these games and make an exciting run for it. I’m excited about the possibilities. But I’m a fan. We’re fans. This is what we live for. We got a crack at!!! Again, We have a crack at it!!!! Fat chance. But it could happen. I’m excited. Can’t wait for the games to begin.

So Fox takes a perceived slight to fuel his competitiveness?

Questions is, will he react to it like Michael Jordan, DeMarcus Cousins or like the same old De’Aaron Fox, some stretches of great, dominating ball wrapped inside long stretches of timidity?

In the meantime, Harrison Barnes is getting worried. Heh .. Looks like he fell a sleep under a tree for 7 years?
I’m coining his new Nick Name .. Rumple Stilksin ..

Ummm BLM … talk to the paw!

ESPN’s forecast panel of NBA experts doesn’t have a lot of faith in the Sacramento Kings.

I’d guess that a straight-up poll with the question “do you think that the Sacramento Kings will make the playoffs?” would come up in the negative, even here.

And why isn’t this site called MasoKhings dot com? Or Kangz, I’m not married to any of these.

To be fair, wouldn’t we all be happier if WE forgot the Kings existed?

We’re used to it.