The Sacramento Kings have struggled for years to convince top draft prospects to visit Sacramento. Even in years when the Kings had higher picks, Sacramento was often left deciding whether or not they should draft a player without ever having met with the player or put them through a workout. It ended poorly at times, especially in the cases of Thomas Robinson and Ben McLemore where the Kings passed over players who'd had impressive workouts such as Damian Lillard and CJ McCollum.

But this year seems different.

The Sacramento Kings have brought in a string of players who are very much in the range of the 9th pick. Our own Tony Xypteras has been updating our tracker with each new workout or interview that leaks. But in case you haven't been paying attention, here are a few of the bigger names that have had either a workout or an interview with the Kings:

Those are just the big names, the tracker has the full list. And those are just the ones we know about. Since the Kings have inexplicably decided not to communicate who they have visit for workouts, this is just what's been compiled through social media and relentless legwork Jason Anderson has been doing for the Bee.

The Kings are very unlikely to have worked out any of the top 5 names in the draft (Cunningham, Suggs, Green, Mobley or Kuminga), but otherwise have at least met with the majority of the players expected to be in their range. The only notable players missing from the list right now are Davion Mitchell, James Bouknight, Franz Wagner, and Josh Giddey. Due to the Kings' secrecy, it's entirely possible they've worked out or interviewed those four players as well.

At the risk of celebrating the Kings for achieving what most teams would simply consider normal, I feel it's worth celebrating progress. I'm impressed that the Kings have been able to get a good look at the majority of the players in their range.

We've yet to get any clear indication which way the Kings might be leaning, although there are plenty of people who would tell you they know exactly who the Kings will pick. It's also entirely possible the Kings end up trading the pick altogether. Whichever decision they make, it's nice to know that it will at least be based on first hand knowledge of the prospects.

I hope it works out for us.

We’re at episode IV of hoping.

And all daddy issues fixed

Where’s the one where Luke likes a tweet that says he should leave the rebels?

Also, note the lack of a right hand.

Last edited 1 year ago by Carl
4

If we can draft another Wookie of the Year candidate like Haliburton I’ll get my hopes up!

Haha! This was good

The Kings are succeeding at failing.

You think the Kings could go to Tatooine, bring back the universes most kickass R-2 unit, a protocol droid, Han Solo, Chewbacca and Luke Skywalker? Then go on to rescue a princess, blow up 2 Death Stars, defeat an Emperor, Darth Vader and the entire Galactic Empire? Nope not these Kings.

Vlade Wan Kenobi would have picked out a ho-hum Sandman. Luke would have been killed by Stormtroopers. Vlade gets double crossed trying to by a ship from Jabba and turned over the Empire. On the way out he talks *#[email protected]$ about Han Solo/Chewbacca for getting enslaved by the Huts to make himself feel better … and ain’t never heard of no robots.

The closest the Kings have ever come to anything Star Wars is probably Episode 8??? Three-ish decades later the Empire has rebuilt into the First Order, has an entire fleet, new super-weapon plant and ready to take over the galaxy again. The Kings’ Alliance has 3 mouth-balled ships, a skeleton crew and no plans or clue to contact anyone else for help … THAT IS KINGS MANAGEMENT!!

Seems like most of us aren’t in favor of trading down with OKC. Would adding a Bagley/Dort swap entice Kings fans more? Too one-sided for Sac? 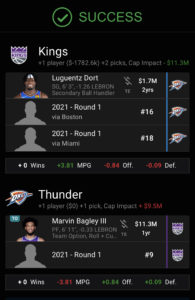 Personally, I’m not a huge fan of Dort. There are a number of guys over there I’d rather have than him.

Totally fair. I was mainly looking for someone on a low, value contract to free up cap space.

I like Dort, but I agree that there are better options if they are willing to part with them. Bazley, possibly Maledon as well would be a little better. That being said, I like Dort enough and dislike Bagley enough to make something like that work

I’d even prefer Kenrich to Dort. I think Dort has gotten a lot of mileage out of being the ultimate “well somebody has to score” guy. He’s a truly terrible offensive player.

yeah, I’d probably agree. I think Dort is a decent player, though. Probably less upside than the other guys

He’s a decent player. Just highly situational. He’s like Roberson, or Allen, or Thybulle. They’re okay if you have stars around them and literally the only thing you need them to do is defend and hit gimmes. But if you have to ask them to do even the slightest amount of lifting on the offensive end, you’re pretty screwed.

oh man, I agree but I’d definitely take thybulle for bagley in a heartbeat

Dort is limited. And I would not trade down with OKC unless we keep #9 and add some of the OKC picks

I fully trust Monte making this pick, I think he deserves that after the Hali pick.
However, I’m on the fence with Monte in regards to FA and trades.
This is a big offseason for Monte to prove himself.

Sort of off topic, but do you guys think we could sign a guy like Khem Birch? I thought he was pretty good last season, but I don’t know what kind of money he’ll be commanding

I suppose he’d be Holmes’ replacement. He’d cost half of what Holmes would cost.
He’d be okay as bench depth, I don’t see him as a starter.

I guess my pick of Wagner is not being looked at, but I do like moody and possibly Zaire Williams if we trade down and he is available

I am not studied up enough on this rookie class, but unless there really appears to be high upside guys in the 16 – 18 range, then I’d probably prefer to keep the pick and get a more reliable player than trade with OKC. We really can’t keep screwing up these drafts, even if we end up with a higher floor, lower ceiling guy

Last edited 1 year ago by KangzofLeon
2

Anyone else think drafting Moody to play the 3 is another recipe for us to be a smaller team? I get he is 6’6 with a good wingspan but I feel it would be best for him to be a primary 2.

I think that 7′ wingspan will allow him to play SF. I’m more worried about whether his poor performance in the tourney could indicate potential problems w/playing in the NBA.

When I watch highlights of him I see a SF, I don’t see a SG at all.

I see a wing who should be able to defend multiple positions.

The tourney is a 4 game sample and the only game that was a level up in comp was against Baylor. 4 games prior to tournament he played similar level competition including the SEC tournament. He averaged 22/7 on 73% FG and 43% 3pt.

The truth is probably somewhere in the middle.

The tourney’s a small sample, but it has the brightest lights for college players. Given what happened w/college basketball this year, I think it’s tough to determine which conferences & teams should’ve been considered a level up in competition. What happened in the tourney doesn’t form my full opinion of Moody or any other player (what I’ve seen & read since then is important), but I think it has some importance when evaluating a player.