In a blockbuster deal, the Washington Wizards traded John Wall and a first round pick to the Houston Rockets for Russell Westbrook.

Houston has agreed to trade Russell Westbrook to Washington for John Wall and a first-round pick, sources tell ESPN.

Wall is younger but has barely played in the past two years due to serious Achilles injury. Westbrook is still a productive if inefficient player and should help the Wizards compete for a playoff spot in the East. Both players have three years remaining on their contracts, and at similarly absurd salaries. The question now is whether this is a precursor to the Rockets trading James Harden, although they are still insisting they don't plan to.

Rockets source: Stance on James Harden has not changed. Houston hopes to be competitive with him this season and does not envision a scenario where Harden would be traded before the opener.

LeBron and Davis re-up with the Lakers

LeBron James and Anthony Davis have both signed lucrative extensions to remain with the Los Angeles Lakers.

All-NBA forward Anthony Davis is finalizing a five-year, $190M maximum contract to stay with the Los Angeles Lakers, @KlutchSports CEO Rich Paul tells ESPN. The deal includes an early termination option prior to fifth season in 2024-2025. Deal could be signed as soon as today.

Neither of these moves are particularly surprising.

Based on LeBron's scoring averages, he could challenge the league's all-time scoring record if he can stay healthy and productive for the next three seasons.

COVID is already an issue

Part of teams reporting on December 1st was that all players would be tested for COVID-19 before joining teammates for practice. The results are in and nearly 9% of the league tested positive.

48 NBA players have tested positive for coronavirus out of 546 tested during initial testing phase from Nov. 24-30, sources tell @TheAthleticNBA @Stadium.

That’s 8.8 percent of the league as teams reassembled after the shortest offseason in league history ...

The full joint announcement from the @nba and @TheNBPA: pic.twitter.com/p6yCz9lWck

This is going to be an unpleasant factor in the upcoming NBA season.

With no bubble & COVID currently raging, the beginning of this season promises to be a shitshow. Here’s hoping for vaccines & better times ahead.

There is going to be a lot of roster shuffling in the league this year. On that particular note, I am glad that McNair picked up players that can adequately eat minutes when our players have to quarantine like Whiteside and Robinson. 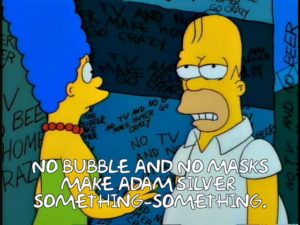 This Wall-Westbrook trade is a total trip. This is why I’m skeptical about teams crying poor and can’t trade players and such. John Wall hasn’t played in two seasons AND still got moved with a max contract.

If anything I’m surprised the Wiz GM Tommy Shephard made the decision to move on this quickly. Probably because Ted Leonsis gave up on Wall, but still.

Not sure what Houston was thinking, but I’m not surprised the Wizards wasted no time the minute there was a partner willing to take on that lost cause.

Houston was thinking things are imploding and they get a first rounder out of the deal (IMHO). And they basically get to prospect Wall to see what he has left in the tank, when healthy.

That’s just a hell of a lot of what is essentially dead money to take on for a single pick, likely mid-teen. Chronic injuries, chronically out of shape, I just don’t see any upside for Houston that’s worth $130M.

What else was there available for Westbrook? It’s not like there’s a shitton of 40+ million dollar players out there to choose from BTB.

Exactly. There are a limited number of trade partners available, and they were going to get back someone else’s dead weight.

I think Houston is a mess. Eric Gordon is in his first year of a 4y 76m contract, that is going to age poorly as well.

Westbrook was dead money too.

I read New York and charlotte wanted him. I would think you could have fleeced charlotte with the decisions they’ve made this off season. Why not explore a trade there?

Why would one assume that these avenues weren’t explored?

Because it’s a lot more fun to assume malfeasance than come to grips with a fairly grim conclusion that real progress is excruciatingly difficult.

Being a cynical bastard isn’t for everybody, yanno.

Maybe they were. It just seems like an unnecessary swing for the fences for their championship window that’s basically closed. If wall comes back healthy and plays well and meshes with harden, perfect. If wall is injured, you’re not getting rid of that contract outside of him medically retiring. At least westbrook was still useful, or a pupu platter of smaller bad contracts from the knicks like Randle, Portis, etc. should theoretically be easier to move than one humongous contract.

Well, he hasn’t played in two years now. I hope he returns to pre-injury form, but achilles tears are so hard to return from. You could be right, he could be fully healthy and back to playing great.

He’s more valuable than John Wall….but how much more is debatable (and is being debated).

I wouldn’t be especially shocked if Houston waives and stretches Wall a year from now. Especially once Harden is traded.

Reading houston fan reactions, I’m super surprised that they’re ecstatic to get rid of westbrook. I’m reading the fit of wall being a standstill 3 point shooter is better than getting the ball out of harden’s hands with westbrook. I don’t get it. WB helped carry that team last year and was playing great until he got injured then contracted covid. It’s like people forget he was playing injured and with a reduced lung capacity.

Westbrook looked absolutely washed when they played the Lakers in the playoffs. Now, he *was* recovering from an injury *and* COVID, so it’s not like he was 100%, but I could see people just being over it from that performance alone.

Cousins and Wall reunited. They should have plenty of time to catch up while they’re rehabbing injuries.

I 100% approve of McNair’s approach to this season – this is a lost season for the Kings and for any semblence of actual competitiveness in the league.

By signing 1 year contracts and bottom of the barrel cost longer contracts, he maintains flexibility for when conditions eventually improve and the league (and the kings) can be more competitive again – especially considering the next 2 draft classess are supposedly stacked, and picking around 12 in those while just missing the playoffs for yet another year is just continued failure.

For those interested in podcasts the “Whistle Blower” podcast is a really interesting listen.

It gets into the details of the Donaghy case and how the NBA is more involved than they’d like to lead on (duh).

There is even an episode that goes over the infamous game 6 with a guest appearance by Carmichael Dave and Scot Pollard.

i cannot take part in such masochistic behavior

I dont blame you but Im a glutton for punishment.

Its a painful reminder how close the NBA might be/is to pro wrestling than not.