It seemed like Buddy Hield was about to be a Los Angeles Laker. Everyone, from the Kings front office, to league insiders, to Buddy himself, thought the trade was about to be completed. The Lakers made a last-second pivot to acquire Russell Westbrook instead.

Since then, Buddy and the Kings have been in a strange sort of limbo. It has appeared that Buddy would rather be elsewhere, though Buddy has stayed professional and silent (at least publicly) on the matter. From the failed trade, we can surmise that the many reports of the Kings shopping Buddy were correct.

So how much longer will Buddy be a King?

A trade could still happen before the season begins, but it would no longer surprise me if Buddy starts the year in Sacramento.

Barring a late Ben Simmons trade, it’s hard to see a trade where Buddy moves before training camp. It seems Buddy will be a King for at least a little while longer.

30Q: How can the coaching staff improve Sacramento’s defense?

The deals for Buddy are harder to find because he does only one thing. Any deal will require a team that needs his specific skill.

Buddy will be a King for a while.

Buddy will be a King for a while.

Buddy watch: 212 games more, and he would become the all-time Sacramento King in games played. Dude doesn’t miss many games, so if he stayed here 3 more seasons he could pass Jason Thompson’s glorious mark. If we made the playoffs, that’d add even more games, of course.

Keeping him around is not bad thing as long as they use him correctly.

“as long as they use him correctly”, and Buddy doesn’t run to the media b/c he’s unhappy with how he is being used.

There’s plenty of teams that could use Buddy’s shooting, shooting is always at a premium. Besides the Lakers deal, Monte simply hasn’t received an offer he has liked. I’m guessing something transpires pre trade deadline.
There’s no rush to trade any of the 3 B’s.
If the right trade comes along, Monte will pull the trigger.

Five more 3-pointers and Buddy becomes the all-time leader in that category for this franchise. 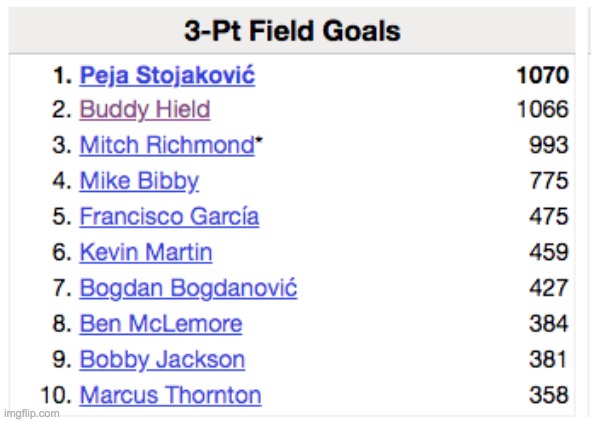 Last edited 4 days ago by Kosta
8

Watch, when Buddy hits 1070 made three’s, Monte will trade him.

“Ha! No franchise record breaking for you, Buddy!”

Buddy’s 3P volume also went up and that’s an ok trade-off – I would rather have Buddy be a 39% shooter on 10 attempts per game than a 43% shooter on 8 attempts. I’m more concerned that his ok-ish scoring at the rim has become outright dismal more recently – it would be nice if a 90% FT shooter could actually generate some FTs in the clutch…

Have to dribble the ball to get to the rim. More than two dribbles and he forgets what to do.