The Sacramento Kings are now sitting at 1-2 after their first three games of the 2021-22 regular season. Tim Maxwell joins the show, as he will continue to for #MaxwellMondays, to talk about some trends we are starting to notice.

Of course, the conversation has to start with Davion Mitchell. Davion has been receiving leaguewide recognition from his peers after impressive defensive performances against Damian Lillard, CJ McCollum, Mike Conley, and Jordan Clarkson.

Sacramento's rookie clearly thrives in isolation situations on the defensive end of the floor, and that impact being so apparent this early for a rookie is surprising.

Stephen Curry presented a bit of a different challenge for the Baylor product who knew he would be tasked with running through a ridiculous amount of screens. He still had his moments 1 on 1 against Curry, but Mitchell showed out on offense himself in game three.

We talk about the impressive variance in his 22 points and four assists on the night. Harrison Barnes also continues his unexpected offensive production, and we point out some numbers that show why this year will be different for the forward.

Is there reason to be concerned about De'Aaron Fox, who has notably struggled in the last two games? We don't particularly think so.

What about Tyrese Haliburton? Tim makes a great point on why the second-year guard could be struggling to find comfort so far.

We also spend time speaking about the play and roles of Buddy Hield, Tristan Thompson vs. Alex Len, Terence Davis, and Maurice Harkless.

The Sacramento Kings were dead last in rebounding last season, and this year they have been on par with all three of their matchups. Progress!

The late-game rotations have been somewhat confusing, and we talk through our questions along with if we have any concerns with how Walton has handled the end of games.

The Kings Pulse podcast is available on all major podcast platforms.

Chainmail: Talkin’ rotations, tanking, trades, and much, much more!

By Tim Maxwell, Will Griffith and Brenden Nunes | 63 Comments
December 7, 2021

Why on earth was Hield in the game the last four minutes, instead of Haliburton? Buddy was ice cold, and Ty already had nine assists. The offense was stagnant, and Hali has shown great ability to unjam those gears when he’s on the floor.

And I’m going to go with riddles, since I tend to already speak that way. Or do I?

If someone spoke in rhyme to me, I would smother them with my RUN DMC body pillow.

Rhyme is the way to go to get your meaning across. Riddles will cause confusion.

Those who have knowledge are wise.

Those who have knowledge and still root for the Kings are otherwise.

Just riddle me this I would say—
What rhyme or what reason today
Explains how the Kings
Messed up so many things?
Fifteen years and more on the way!

Also, why is TT getting so much more run than Len?

Matchups be damned, Len>TT on the court and I don’t think it’s all that close.

That’s a tough one. I like what each player does, and maybe TT makes more sense against a team with a small center. On the other hand, Looney isn’t ever going to be more than ten feet from the basket on offense, and Len can certainly handle that kind of coverage.

I thought Thompson was pretty good last night, but I’d have no issue throwing Len out there to switch things up. Hell, let’s get Metu out there and see what happens when their defense has to follow him out to the arc. It might have really freed Fox up a bit if Metu had come in and nailed a three, and the defense had to react.

TT just hasn’t been good at defense in years.

And when the Kings are dead last in second half defense rating so far, I can’t fathom why Luke is leaning on TT to be the back up big defensive anchor!

Anchor is an appropriate description.

They were playing three guards. I think they were hoping Buddy could create his own shot, Davion was needed for defense, and Fox could run the offense. Tyrese wasn’t shooting well, is bad with one on one defense, and Fox was thought to be able to fill Haliburton’s playmaking skill. I think that was the reasoning. Never mind that Buddy Buckets was Buddy Chuckets last night and Fox was forcing it to score his all night. Just saying what I imagine the reasoning was.

There seems to be role confusion with the 5 guards. I love Davion but he dribbles too much and uses up the clock.
Hali has sort of disappeared Fox is tentative.
Here is a big mess to step in: why not start Buddy and stagger bringing Davion, Hali and TD off bench?
all the guards have different skills- NBA skills but not meshing. and no consistent firepower (Except Barnes) from 3,4 and 5.

I still see the same issue that I’ve been preaching since last year, I’m not sure Haliburton and Fox can succeed together. what make both special is having the ball and controlling the offense. And Haliburton is better at it. At some point this is going to come to a head. I hate to say it but Haliburton has to be the primary ball handler which hurts Fox if he going to shoot under 36% from 3. I know it’s early But what fix is there for 2 starting point guards that have to have the ball? Why Chris Paul and Booker works is cause Booker can play off ball. Remember this GM did not draft Fox, instead drafted 2 point guards!?!?

People on this site have some very thoughtful views regarding details between the lines. But when you’re a small market team, with a quirky owner, and your season ticket base looks like this behind both baskets … if they aren’t winning and regularly filling those seats based upon new fan excitement … what they might do and when they might be prepared to pull the trigger might be very different than many might anticipate 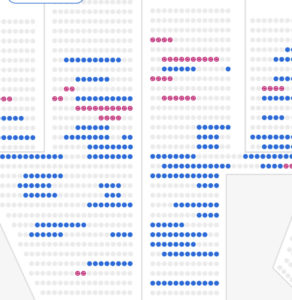 Great pod. You covered a lot of pertinent topics well but succinctly, brought up stuff I wouldn’t have thought but once I heard it I knew yeah that’s important.

I’m not sure why their rebounding is simply mediocre and not awful with their roster. I’m glad, but it just confuses me.

Everyone needs to stop freaking out. We are tied for the 8th seed right now!!

I don’t think that you did it on purpose, but when you said, “I’m a wordsmith…guy.” that made it all worth the price of admission.