Another preseason game, another preseason win for the Sacramento Kings, who knocked off the Portland Trail Blazers 107-93 on Monday. Davion Mitchell got the start for Sacramento and was sensational, scoring 20 points and dishing on 4 assists while shooting 7 of 12 from the field and 6 of 9 from three.

Anfernee Simons led the Blazers with 24 points, while Dennis Smith Jr. had 18 points and 7 assists.

Harrison Barnes continued his steady preseason with 16 points, while Terence Davis had 17 points, 3 boards, and 2 steals. De'Aaron Fox played 22 minutes, finishing with 8 points on 2-10 shooting but adding in 5 assists, 4 rebounds, and 3 steals. He did shoot 4-4 from the free throw line, and is now 10-10 from the line in the preseason.

While the first two preseason games featured Luke Walton sticking with his key rotation players for most of the game, he dug deeper into the rotation against Portland. 16 players entered the contest for Sacramento; Chimezie Metu, Jahmi'us Ramsey, and Louis King all got good minutes, while Robert Woodard and Neemias Queta both saw action for the first time in preseason.

The Kings will head home to face the Los Angeles Lakers on Thursday in their last preseason contest.

Davion Mitchell is proving his three-point shot is for real

Around The Realm: Nets announce Kyrie won’t practice or play with team 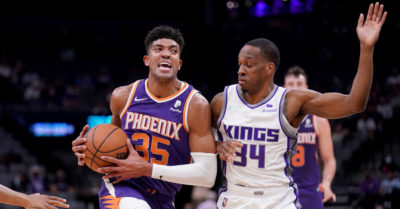 And the Giants hung on to win last night against the Dodgers 1-0!

Last edited 1 day ago by Kosta
3

….so not only is my supervisor a L*kers fan, and a D*dgers fan………he’s from Sacramento.

Davion Mitchell is obviously going to be able to play defense but if he is going to shoot the way he we’ve seen both in Summer League and in the preseason he’s going to be a really nice player.

Yep. He’s been extremely impressive so far. If his shot is even decent, he’s a player, like for real.

Last edited 1 day ago by Carl
3

Just to get the pulse of folks around here, if Fox, Hali and Mitchell end up being the best players and assets on this team, does Monte feel the need to move one of them to round out the roster elsewhere? Basically does he cash out on excellent guard depth to possibly add excellent wing depth?

I’m not sure, but if not they should make RUN DMT t-shirts or something.