With last night's win against the Orlando Magic, the Kings notched their 21st win of the season, thus guaranteeing they will finish the first half of the season over .500.  The last time the Kings were over .500 at the halfway point was all the way back in the 2004-05 season. The Kings currently sit atop the Pacific Division, are 5th overall in the West and have one of the easiest remaining schedules in the league. So why am I still nervous?

Some of that trepidation definitely comes with just being a Kings fan and experiencing so much disappointment over the last 16 years.  We've had moments like this before where it seemed like we were turning a corner and you don't even have to go back that far to find it; Back in 2019, Dave Joerger had the Kings at 30-26 but they would win just 9 more games the entire rest of the season.  Despite how fun this season has been, I can't seem to shake the feeling that it could all come crashing down at any moment and I probably won't lose that feeling until I actually see this team in the playoffs.

But the biggest reason for my nervousness is just how close everyone in the Western Conference is right now.  The Kings are 5th at 21-18, but just 3.5 games separate the Kings with the 13th place Oklahoma City Thunder at 18-22.  The only teams in the West with any real separation right now are the Denver Nuggets and Memphis Grizzlies, both at 27-13, with the New Orleans Pelicans not far behind at 25-16.  The only truly bad teams in the West are the San Antonio Spurs (13-28) and the Houston Rockets (10-30).  Everyone else is fighting for those play in spots and not much separates them.  One winning or losing streak changes the standings so much.  Just look at the Dallas Mavericks, who were outside of the playoff picture at 15-16 but then snapped off 7 wins in a row to vault to the 4th in the conference.  Then there's the Phoenix Suns who were 18-12 when Devin Booker got hurt and have since gone 2-9 and are now 8th in the West.

The Kings have put themselves in a good position, but they can't afford to let up at all.  Those big losses to bad teams like Charlotte and Washington at home sting particularly hard when every game matters so much.  Sacramento's next three games come against the Rockets and Spurs, teams they should beat and have to if they hope to make the playoffs.  Unlike previous seasons where the Kings would only seem to get up for good teams, they have to treat each night like a must win game.  Last night was a good example of them doing just that, as they took care of business on the home floor against a young Magic team.

The second half of the season will come with its own challenges.  The Kings aren't a surprise anymore and teams are starting to figure them out.  Over this last stretch of games, we've seen opposing teams relentlessly attack the paint knowing that the Kings aren't going to stop them.  Perhaps no team exploited this better than the Lakers on Wednesday night when they scored 70 points in the paint in a game the Kings still had a chance to win.  There's definitely a personnel issue at play here as the Kings don't have a traditional rim protector, but we've also seen the Kings play better defense this season than they have been lately.  The Kings likely aren't going to become a good or even great defensive team as currently constructed, but they can't afford to be terrible.  For their part, the Kings know this as well as both Mike Brown and the players continue to mention defense as their first priority and I'm sure when Monte McNair is looking at guys to add, defense will be first on the list.

For once though, the Kings are in control of their own destiny.  They aren't on the outside looking in, hoping to catch someone else in the standings and sneak in through the play-in games.  They have the advantage right now and they need to press it.

To prevent spam, our system flags comments that include too many hyperlinks. If you would like to share a comment with multiple links, make sure you email [email protected] for it to be approved.
Subscribe
Login
Please login to comment
35 Comments
Oldest
Newest Most Voted
Inline Feedbacks
View all comments

Question about NBA Divisions: are they basically meaningless? Being on top of the Pacific means less than a Summer League Championship, correct? (Not trying to belittle the article for pointing it out, just genuinely trying to understand what it means.)
I know that rank within division can potentially be used as a tiebreaker for playoff standing, but is there any other significance at all?

Yeah NBA Divisions are basically meaningless nowadays. There’s no automatic playoff berth or seeding awarded to Division winners. The only things divisions really do now is tell you which teams you are guaranteed to play 4 times a season.

Do they still hand out banners for them?

PACIFIC DIVISION CHAMPIONS ‘22-‘23….Vivek is bringing the shirt to the team store next time you’re in the arena

Last edited 27 days ago by JoeMama
1

These next 3 games should be a sweep, if not, I will officially begin to worry. If successful, they will be 24-18 with 40 games left. Treading water would get them to 44 wins by seasons end. Barring injury to their top 2 players I like their chances to end the playoff drought.

I would go as far as 48 wins as long as major players are healthy and we improve on defense.

I’m afraid that with the lack of depth, or at least the lack of consistent depth, the loss of either Domas, Fox, Barnes or Huerter to injury for an extended period could be ‘fatal’.

And I believe that we have been pretty lucky so far with the low amount of games missed by key rotation players. It will be a surprise if we can sustain that.

They should absolutely be a sweep. I’m nervous considering the Kings usually play down to their competition.

Because they defend like shit they allow every team to stay in the game, unless the Kings are shooting well, like last night.

It’s that thin of a margin. If they aren’t shooting well they can and will lose to anyone.

Dont love seeing Fox 3ball slowly dropping back and them not shooting the 3 as much (except yesterday). Murray needs more shots.

But all of this comes down to D.

All the above I agree with. I hope last night wasn’t a fluke and they will now not play down to the competition. If this is true and they win some tough ones then the schedule is not that hard. Would be nice to win the next three and get ride of that 4 game jinx. For now IMO Metu is the backup for Sabonis. If the Kings can improve their defense especially the guards and wings which they can do then we have a good chance to get to the playoffs. This will help to protect the paint.As my last comment the only players at this time I would look to trade are Holmes, Davis and Len. I can’t see much we could get. Maybe a player like Chris Boucher who would definitely help Sabonis and Metu.

Tough to trade position for position- we give you a flawed 5 for your flawed five. A three way may help unlock that. N But those 3 are the ones on the block.
I would be reluctant to give up a future first- either way down the line or with a Hawks trade manipulation, and only get a temporary fix. There are quite a few athletic centers who could help- but out of reach.
The tankers want too much future assets and the play off teams want a single missing piece.

The fact that we are not already doing deep dives on the top five prospects in the 2023 NBA draft is sustaining me right now.

Haven’t looked at DraftNet since the 0-4 start lol.

With all the Sabonering, no tank gifs either

“To the unspoiled, go the Victor.” 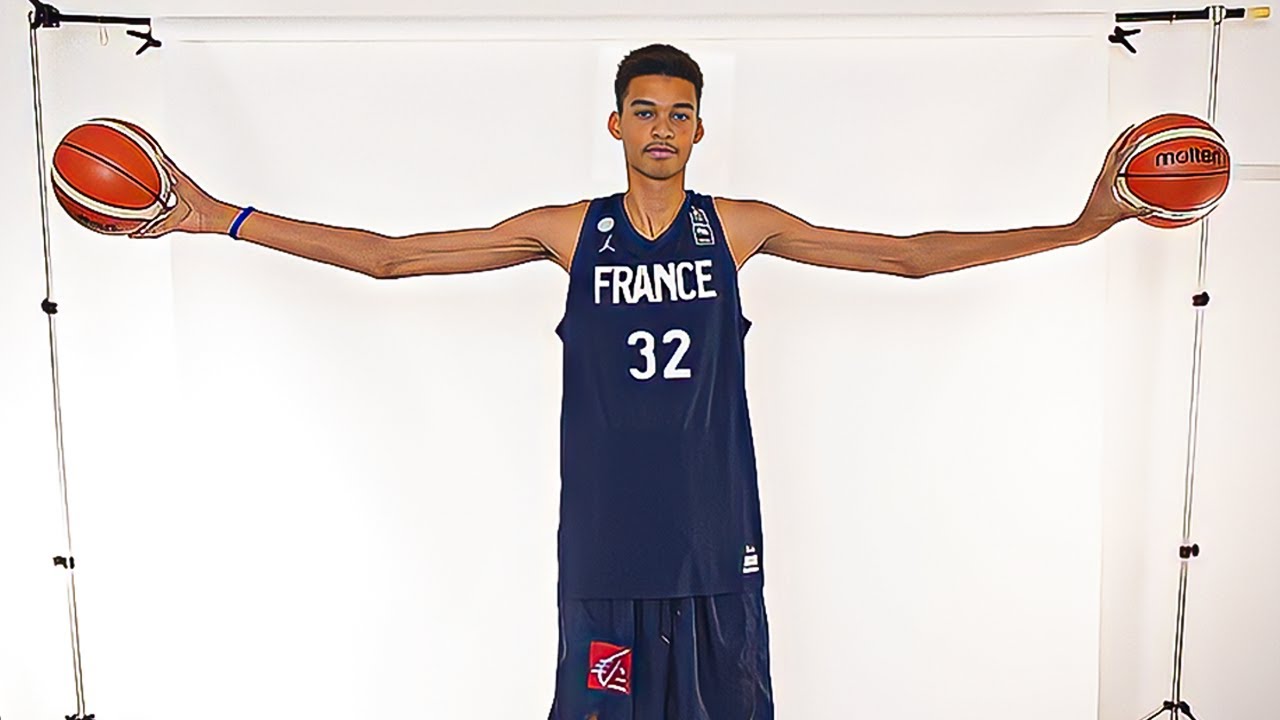 I can’t help but think that he’s basketball’s Sidd Finch.

Last edited 27 days ago by RobHessing
2

That pic makes me immediately think of Chet Holmgren, who, as I mentioned in preseason, I was worried about from an injury standpoint.

Fortunately, Wemby isn’t *quite* as wispy as Holmgren or as much as this picture makes him look.

Still, I worry a lot about these guys who are “physical freaks of nature” from a long-term standpoint. For every Kareem and Shaq, there are far more Greg Oden’s and Sam Bowie’s.

Last edited 27 days ago by Nodaclu
1

I have taken a peek. But these players are all so young and a few years from a few years away.

I’ve looked at guys like Taylor Hendricks (UCF), Noah Clowney (Ala), Coleman Hawkins (Ill) and Kris Murray (Ia and a fun story), but that’s about it so far. Mostly looking for help at the 4 in the 18-23 range.

Loses to Hornets, Wiz, Hawks and LAL all hurt. It should be easier not to lose to lousy teams than it is to beat good teams.
That said, Kings one of 4 teams in West with a .500 road record.
I would like top 6 play-off record. Not play-in- top 10.
Each game in West is important.
Protecting the pain is a problem. I see how other teams just slam any King within 10 feet of the hoop Kings don’t do that.
The Dozier acquisition may help the perimeter but Kings need Rick Mahorn. If Dozier works out, then TD might be in a package to get a Mahorn like player. Back up centers are tough to get.
Mo Bamba, often mentioned in that light, played last night and looks horrible. Problem of curse is back up centers are smaller in size, that Keegan and Barnes are really SF’s and that Sabonis is a small size center. At some point, the paint attack becomes even more relentless. The close to perfect guy would be JJJ from Memphis but oh, yes, we drafted Bagley instead.
We go into the paint and other teams swat us and clobber us while when they go into the paint, we hope Davion can get the charge foul.
and I like Keegan but shit, dunk with authority or lay out for a lay up. He got run down from behind !

Definitely a tight race, can’t remember a year like this. Any injuries or losing streaks and we’re right back in Kangzville, definitely makes me nervous. This group feels different though and a half season done shows that we’re legit. It’s gonna be tough, will need the basketball gods to finally show some mercy lol.
At least we have Mike Brown maximizing our talent. I would like to see an upgrade through trade but makes me scared to think it could make things worse, even though we’re not even that good, that Kangz trauma hit different haha