Tyrese Haliburton carried the label of a high-floor, low-ceiling prospect coming out of Iowa State after his sophomore season. Concerns revolved around his space creation ability and shooting off the bounce, yet Haliburton has quieted some of those critics by averaging 50.4 effective field goal percentage on off-the-dribble attempts this season, which accounts for 44.8 percent of his shot profile.

Yet, there is still plenty of reason to be skeptical about the rookie's ceiling. His usage rate is a mere 17.2 percent while fellow rookies Anthony Edwards and LaMelo Ball have tallied 26.2 and 27.0 percent respectfully. Haliburton can be considered one of the three best players on the roster and is the second-best playmaker behind De'Aaron Fox, yet he ranks 8th in usage rate.

Fox, Hassan Whiteside, Marvin Bagley III, Terence Davis II, Chimezie Metu, Buddy Hield, and Kyle Guy are the names listed above the 6'5 guard. Part of what makes Haliburton ridiculously efficient while maintaining minimal mistakes is his unselfishness and desire to involve his teammates. Yet, true stars in this league recognize when it is time to take the situation into their own hands and use their talents to make something happen.

Last night, with Fox sidelined, was a fine example of that from the rookie. He finished the night with 24 points, eight assists, three rebounds, one steal, just one turnover, and a 30.2 percent usage rate.

Aside from a Brooklyn Nets game earlier this season, this may have been his best performance yet. Incoincidentally, those are the only two games this season where Tyrese attempted a minimum of 20 field goals and the highest minutes he has tallied all season.

Headed into the fourth quarter of a close game in San Francisco, Haliburton became the clear engine of the offense - nearly every possession featured the rookie in a pick-and-roll situation. He masterfully manipulated and read Kevon Looney for an extended stretch.

Initially, Looney was overly concerned with Metu rolling (and the threat of a Haliburton lob pass), which allowed the guard to practically walk into a layup. Not wanting to make the same mistake twice, Looney then remained locked in on Haliburton the next time around, which left Metu open rolling to the rim and the Iowa State product capitalized poor weakside help.

Steve Kerr had seen enough, the next time around Haliburton would be met by a blitz to force the ball out of his hands. Double teams like this are the true sign of a star player in the association or of poor surrounding talent and last night seemed to be a bit of both. If Fox was available, teams would quickly regret sending two towards his backcourt partner. Yet without him there were flustering moments with unideal spacing or passes not made quickly enough to capitalize on a numbers advantage created by the threat of Haliburton.

Golden State's following adjustment was to assign Andrew Wiggins to Metu and switch on the inevitable screen. The first time around, the switch is too lackadaisical and Haliburton quickly recognizes just enough daylight to splash one from downtown.

That defensive game plan was short-lived before the Warriors resorted back to blitzing Haliburton which proved successful due to lagged decision making or poor handling from the others on Sacramento's roster.

It appears as if Metu was focused on the next pass he was going to make before fully securing the catch in the first possession or it would have been an easy bucket for Davis as a result of Haliburton's presence. In the latter possession, the spacing was unideal as pressure was intelligently placed on the inexperienced Metu.

Richaun Holmes would quickly be inserted into the game, as would Draymond Green for Looney. With Green at the five, Golden State elected to switch everything. Subsequently, Draymond is tasked with closing out on Haliburton after Hield applies pressure and the rookie darts past the former defensive player of the year for his patented floater.

Curry was the clear weak link of the Warriors' defense and switch everything meant it should have been simple to get Haliburton in a favorable situation. Harkless, who Curry was attempting to hide on, then began to set screens for Haliburton to exploit that exact scenario.

The carry is forgivable, every player in the league makes mistakes, particularly rookies, but I admire his willingness to attempt and break Curry down off the bounce. On the ensuing possession, you see that Curry stands no chance staying in front of the 21-year-old as he converts what could have been whistled an and-one.

Tyrese Haliburton played the entirety of the fourth quarter and managed an impressive 15 points during that stretch along with a few unofficial assists that lead to free throw attempts for his teammates. His potential to be an elite pick-and-roll player was on full display and this closing quarter of play had everything Sacramento fans could want aside from the game-winning cherry on top.

The final possession featured a tough step-back attempt from Harrison Barnes in isolation against Andrew Wiggins with the Kings down two. Tyrese Haliburton did not touch the ball after inbounding it.

With De'Aaron Fox sidelined for a handful more games, it is time for Tyrese Haliburton to continue to silence the critics and shine his all-star potential. Additional showings comparable to last night against Golden State, and earlier in the year against Brooklyn, may b enough to alter the public perception on his ceiling and prove that a Fox-Haliburton backcourt duo is a force to be reckoned with both now and in the future.

Pictured below: The best thing about this season –

Proposal to refer to any Tyrese critic as a “HaliBUT.” Who’s with me?

Last edited 1 year ago by AmateurNerd
3

Him trying to carry this team: “Haliburden.”

Seems like Luke has all but Haliburied Tyrese’s ROY prospects.

Thread Jack: Just heard Ham on the radio gushing about Mo Harkless, saying the team should ink him to a 3-year $12-14M deal this summer. I have been a little checked out the last few weeks, but I haven’t much on TKH abt Mo Harkless…is Ham right or just shillin’?

Harkless has been a decent backup utility player. 3/12 seems like a fair contract and probably what he’ll get in FA. He’s had some good moments (https://youtu.be/stuNNtI3gmw), but hasn’t really shown he’s a difference maker overall. I do like the fire he brings to the team though.

For a backup 3/4, and one who defends and doesn’t need his number called on offense, that would be a pretty good signing. The front office has higher priorities at the moment, but if Moe is back next season on a contract like this, that’s a win.

It depends on who we gonna to draft later…and I have faith we would land Jonathan Kuminga….if signing back Harkless which probably mean less minutes for Kuminga…

But I definitely think a 3 years deal about $10M deal would be fine to sign Harkless back.

Harkless is fine. He’s not the cause of or solution to any of this team’s problems.

Can he play owner?

this is great content Brenden, I enjoy the video breakdowns.

It’s possible the video under the following paragraph isn’t what was intended:
Richaun Holmes would quickly be inserted into the game, as would Draymond Green for Looney. With Green at the five, Golden State elected to switch everything. Subsequently, Draymond is tasked with closing out on Haliburton after Hield applies pressure and the rookie darts past the former defensive player of the year for his patented floater.

Totally was a mistake on my part, but is fixed now!

Luke: Maybe I should bench him to get Terence Davis and Moe some additional minutes.

I’ve said this before but is Terence Davis mandated to shot 40 shots a game? WTentireF. Pass the fucking ball.

Pretty sure Vivek tells the great Luke Walton who plays and when. Luke is not exactly in a position to tell him no.

Another perfectly reasonable supposition on your part. Well done.

OT: The Kings never put out a press release, but Luke Bornn is no longer with the team. He’s officially off the contact us page, and he has “formerly @sacramentokings” on his Twitter bio. Previously, they said he would stay on as a consultant, but it looks like that arrangement ended last year (the Wayback Machine indicates he was removed sometime in January).

If I’m not mistaken, that means the Kings are basically the only team in the NBA without an executive-level employee running their analytics dept. Obviously they have McNair and Catanella, but still, it’s a little odd that analytics continues to be understaffed during the McNair era.

Look at me … look at me. I’m the analytics guy now. 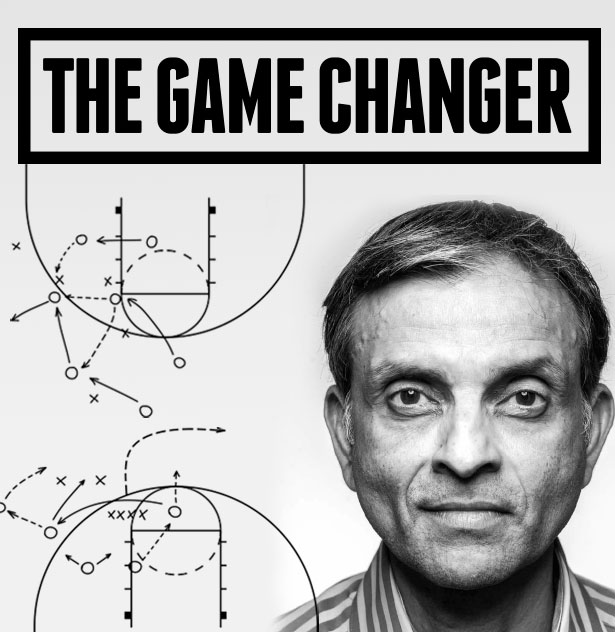 What is the number of analytics staff in Sacramento, and what is typical for the rest of the league?

So it’s as likely as not that analytics staffing here is typical?

I’m not sure what Bornn was doing anyway. He almost literally never tweeted about the Kings and was obviously working on other things during his time “with” the Kings. Certainly the previous front office didn’t listen to him. I think (without evidence) that he was at most a part time consultant and quite possibly being paid largely to deflect anti-stats criticism from the cromagnon stooges running the front office.

It’s still a bit strange that a guy with McNair’s reputation would go a whole season without a replacement. If a GM known for his scouting prowess didn’t hire a director of scouting, then wouldn’t that raise a few eyebrows?

Do you need analytics staff to deal with this team?

Can Buddy dribble?…..No
Will Bagley play?…….Ask his daddy.
What is the best defensive scheme for this team?…..Not any
Should Halliburton play more?…..Is he the new guy who knows how to play basketball?

even so, don’t you think you’d want a fully staffed analytics department helping to identify talent in the draft/FA/trade deadline?

WhoTF is Bornn. He last name gives me asshole vibes.

NBAStuffer has a list of analytics staffs for each team, but looks like it hasn’t been checked in a while – although, interestingly enough, Bornn’s name is crossed out for Sacramento.

NBA Teams That Have Analytics Department

Last edited 1 year ago by Otis
0

they read my posts

I did a little more digging based on the NBAstuffer list. It looks like Matthew van Bommel and Chris Pickard, are no longer with the Kings. They both moved over to a sports intelligence platform called Zelua Analytics that Luke Bornn recently started. It looks like Bornn actually has three former Kings analysts working for him. A guy named Ozan Adiguzel also has the Kings in his bio.
In addition, Nathan Sandholtz is now a postdoctoral fellow at the University of Toronto. That puts the total number of people in the Kings basketball analytics department at 3 (assuming they haven’t made any new hires recently).

Hali bringing some light to this dreadful season. I missed the game, thanks for the video breakdowns!

Yeah, Haliburton’s ability running the offense, even at this early stage of his development, made that last play against GS more of a head scratcher.