The Sacramento Kings picked up contract options for both Damian Jones and Chimezie Metu today, according to reports from ESPN's Adrian Wojnarowski and NBCS's James Ham:

The Sacramento Kings are picking up the option on C Damian Jones for the 2021-2022 season, source tells ESPN.

In addition to Jones' contract, the Kings are guaranteeing Chimezie Metu's contract. He is now under contract for a guaranteed $881,398, with potential for the entire seasons deal at $1.8 million.

As Ham notes, Metu's contract has another guarantee date later in the season.

Today was the deadline for both contracts, and it was a question whether the Kings would continue to keep both Jones and Metu around. The Kings have a full stable of big men on the roster. The Kings successfully re-signed Richaun Holmes this offseason, added Alex Len in free agency, signed second-round pick Neemias Queta to a two-way contract, and traded for Tristan Thompson. The Kings also still have Marvin Bagley, along with Harrison Barnes who spent a good deal of minutes at power forward last season.

Jones and Metu both made the most of their opportunities with the Kings last season. Metu was originally on a two-way contract before proving himself a valuable bench contributor and earning a full contract from the Kings. He also played for the Nigerian national team at the Olympics, and played well. Metu is currently with the Kings summer league team in Las Vegas.

Jones came to Sacramento on a 10-day contract, and played well enough to earn a second 10-day. At the end of that deal the Kings added him to full the roster.

Picking up the options on Jones and Metu doesn't mean that they'll necessarily still be on the roster opening day, however. Both players are on very small contracts, and could be cut at the end of training camp when roster must be trimmed. The Kings could also include one or both in a trade, or a trade involving other Kings bigs could free up minutes and an opportunity for Jones and Metu to stay. Picking up the options is a low-cost decision that gives the Kings many options moving forward, and rewards the players for their contributions to the team last season. 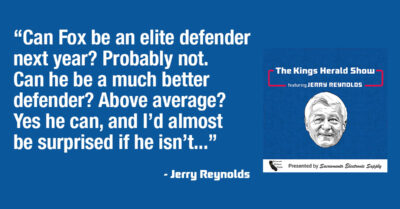 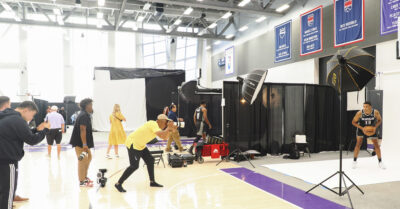 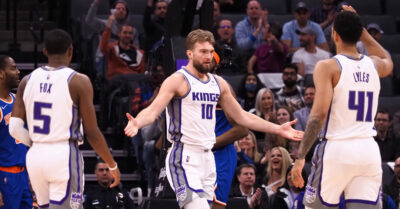 30Q: When will we trust that the Kings are good again?

Given that neither Thompson nor Len are anything other than stopgaps, it makes sense to keep some young guys around who’ve shown some promise, especially at bargain rates. May as well use all of the leverage that you’ve got.

Of course, Walton will be trying to keep his job, and doesn’t give a shit about any long-term plan that the organization might have to develop players.

Does the organization have a long-term plan to develop players?

Just curious, have the Kings actually announced the Len signing yet or the terms of his deal?

Was just asking the same thing, and I don’t think that it has been officially announced yet. The Kings, by my count, are at 15 contracts plus a pair of two-ways not including Len.

Just did some internet searching and I can’t find it anywhere. Last reports were on Aug. 2nd when Shams said he signed a 2 year deal, but nothing since then.

I also think they can carry something like 20 players under contract up to the start of the season.

I’m counting 15 players plus a pair of two-ways (and I could be absolutely wrong here):

Fox, Hali, Mitchell, Hield, Davis and Ramsey at the guards (6). Holmes, Bagley, Thompson, Jones and Metu up front (5). Barnes, Harkless, Woodard and James (not guaranteed) on the wing / stretch four as applicable (4).

Queta and King on two-ways.

I know that they can carry more players under contract right now. What is the limit once the season begins?

Last edited 1 year ago by RobHessing
0

It’s normally 15 once the season begins, but didn’t they expand the rosters last year due to Covid? I wonder if they are leaving that in place.

Louis King should be a Kings, no doubt !!!

It’s 15 like Adam said. But I would suspect trades clear this logjam up.

Metu deserves a roster spot. I don’t understand. He damn near should start beside Holmes. WTF.

I want to start the MeTu movement! #MeTu

Justin James’s 2021/22 contract becomes guaranteed by not waived by August 15, 2021, HoopsHype has learned.

Okay, it seems Justin James will be the same situation as Guy, they will not stay as a King…

I thought Jones showed good court awareness, made good passes, and in a small sample size, looked good taking shots from outside the paint. He did a very nice job of rim protection, and he runs like an antelope. That is a large man.

This isn’t to denigrate Metu, who I think shows real potential, he’s just more of a natural four than a five. His time spent in the Spurs system seems to have been great for him, as opposed to, eh, you know.

That dumbass trade for TT looks worse every day that goes by.

I heard that he could not be moved for 60 days BUT that rule was changed in COVID to 19 days.

Harry Giles is a UFA. If I were Monte I’d sign ’em.

Please tell me the Kings aren’t going into this season with a core of Fox, Hali, Barnes and Holmes. Or is Monte this delusional to think said group of players will even have a remote chance of leading the team to an improved record, or even sniffing a playoff spot.