Over the last three-plus years, Kings fans have continuously asked themselves one question regarding De'Aaron Fox:

When is our cornerstone going to realize he's the guy and play more assertively?

There's never been any doubt about Fox's unique blend of speed and tough shot-making skills, but his tendency to flow within games rather than control them has always been a point of frustration for those around him. An aggressive quarter or half has often been followed by multiple minutes of drifting, and the Kings nearly always fall apart in those lifeless minutes. The talent has always been there, the consistency has not.

The first dozen game of this season (ignoring a five-minute performance against the Chicago Bulls), displayed the same old De'Aaron Fox. He looked and played exactly like his 2019-2020 self, a concerning lack of development for a player who had just inked a five-year, $163 million max contract extension.

However, since his 43-point outburst against the New Orleans Pelicans in mid-January, De'Aaron's game has not only surpassed that of last year's performance, it has developed into an All-Star worthy conversation. He's becoming the guy for the Kings.

There's no better example of Fox's recent willingness to takeover than his last two fourth quarter performances, as he's combined to score 34 points in 24 minutes of play on 61% shooting from the floor, while recording a plus-22 in his time on the court. Overall, over his last seven games, Fox has averaged 28 points, 8.4 assists, and 4.4 boards on a nightly basis, one of three such players (Doncic, Lillard) to average at least 28, 8, and 4 over that span. Perhaps even more impressive than his overall play has been De'Aaron's outside shooting. He's knocking down 38% of his shots from deep, and he's taking more than double his career-average at 7.3 per game.

Fox's newfound aggression isn't only found in his basic box score numbers either. The evidence is everywhere. Through his first twelve game of the year, De'Aaron was actually less assertive than last season, recording 77.4 touches per game and averaging 6.3 seconds of on-ball time per possession, compared to 80.6 touches and a 7.1 second average in 2019-2020. During his recent surge in production, Fox has skyrocketed to 96.5 touches per game, an incredible 20% increase from the first part of the season, as well as averaging 8.1 seconds per possession, both of which rank fifth in the NBA.

That dramatic increase in usage hasn't come from Fox simply jacking up more shots from around the court either. While it's true that his field goal attempts have increased somewhat drastically, from 16 to 21 per game, De'Aaron isn't settling for a bunch of low percentage, low efficiency shots. In fact, he's taking about one fewer midrange jumper per game during this hot stretch. Instead, Fox has categorically refused to turn off his afterburners at any time during the game. He's driving the ball 21.4 times (5th in the league) and averaging 14.1 points (3rd in the league) on those forays into the paint, a far cry from his averages of 15.1 drives and 9.8 points per game earlier in the season.

Interestingly enough, Fox's increase in scoring and in average number of drives hasn't correlated with an increase in transition opportunities. He's actually averaging slightly fewer fast break points over his last seven games, meaning his jump in production isn't due to the Kings getting out into the open court more frequently. This version of Fox is not only taking advantage of opponents as they're backpedaling; he's also dominating defenders in the half-court, a development not yet seen to this point in his career.

In January, after the team's 8th loss in 10 tries, Fox was brutally honest about his struggles regarding leadership and star-level play, but his last seven performances have demonstrated what exactly he's capable of on the court. He's finally seemed to realize that the only player who has been stopping De'Aaron Fox from playing at an All-Star level has been De'Aaron Fox. He's finally becoming the guy for the Sacramento Kings, and that's exactly what this franchise desperately needs. 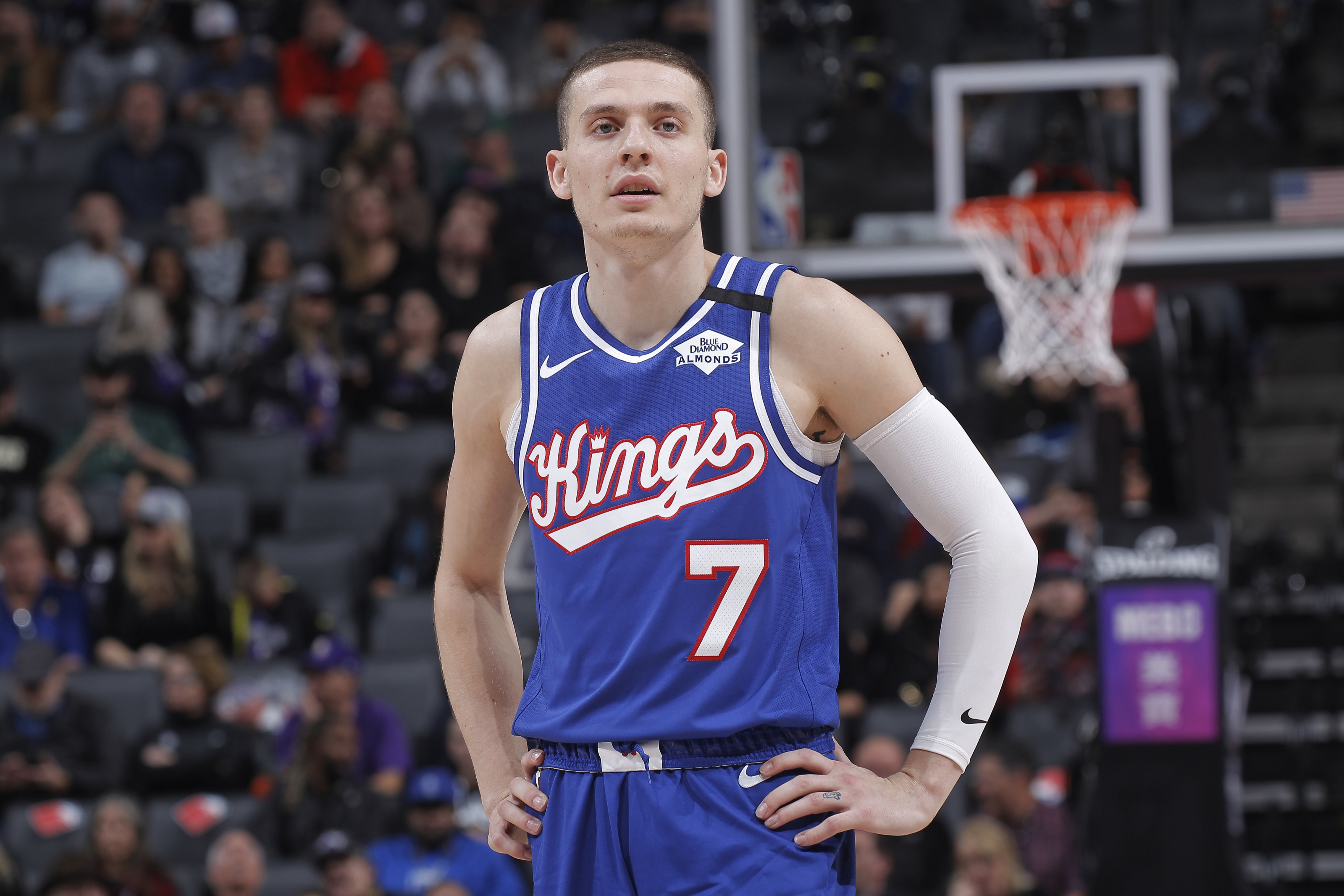 Fox replaced Guy as the Guy.

Fox realizing he is the man and playing accordingly was my only concern with him. So this article summed it up perfectly. His passive play at times made me feel like he deferred to Buddy/Barnes too much, therefore meaning a trade needed to happen involving at least one of them. The numbers he had over this stretch are all star worthy, especially when they are being mentioned with Dame and Luka. Keep it up Fox and take this league by storm. His foul calls will come, he gets hacked almost every drive by swiping defenders.

If he ever starts to get even half of the calls when he’s fouled on drives, he’ll average a dozen FTAs per game. Stopping Fox at the rim without fouling him has gotten increasingly difficult for defenders. Seeing an increased willingness to impose his physical gifts and hard work on defenses ought to scare the hell out of opponents, because they’ll need to collapse on him, and his ability to find shooters on kick-outs has always been good, and is only getting better.

I don’t expect that Haliburton will become as proficient as Hield on three-pointers over the course of his career, but he’s clearly got the shot. The real help to Fox comes with Ty being able to effectively run the offense while Fox hustles to a spot where he can shoot or initiate.

My thoughts exactly about Tyrese. I feel like De’Aaron can play more aggressively when TH is on the floor. Something they aren’t/weren’t able to do when CoJo or Buddy are handling the ball.

I get a little giddy imagining this team 2 years from now. De’Aaron is a 2 time all star. TH was rookie of the year and now on his way to becoming a first time all star. Holmes is on his second year of his new 4 year contract. Bagley has finally become worthy of the number 2 draft pick (we trade him for the second pick in the draft). The Kings are a force to be reckon with and no one wants to face them in the playoffs. They are also considered the best Sacramento Kings team EVER, and most fans and former players would agree……….ummmm and Cade Cunningham begins the season as a starter…

Hali being a facilitator next to Fox is what Walton was trying to do with Buddy last year. It didn’t work but can’t blame Walton for trying. Hali is a breath of fresh air, having him puts two point guards out there and opens up the offense for everyone.

“Bagley has finally become worthy of the number 2 draft pick (we trade him for the second pick in the draft).”

This sentence is HIGHLY underrated ð¤£ð¤£ð¤£

What a pleasant dream dream!

Haliburton may not be the pure shooter that Buddy is, but he gets cleaner looks at the rim because he’s a threat to drive and pass. He has the sweet floater and he can get all the way to the rim with his length. Defenders are having to honor Haliburton as multi-dimensional player whereas with Buddy they are taking his 3 ball and his counter moves have been totally ineffectual.

So what Haliburton lacks in pure shot mechanics he may make up for in his well rounded potency and verstality that Buddy lacks that will help boost his 3 point accuracy. The numbers bear that out slightly with Hali at 41% from 3 and Buddy at 39%, albeit on drastically difference in attempts (88 vs 208).

Relatedly this is one of the reasons I said two seasons ago Fox was the best scorer on our team and would prove so even though this was after the season Buddy led us in scoring. Fox creates more space for himself and had good shot mechanics so it was only a matter of time through natural progression Fox would pass Buddy as our leading scorer.

There was a time when it looked like Buddy could develop an in-between game or figure a way to drive and get fouled more with his strength and savvy but it just has not materialized. I cannot put my finger on it but maybe it is because as Buddy has added strength he’s lost quickness and that has made an easier to defend.

I cringe whenever Held penetrates the lane dribbling with his left hand.
It’s almost an automatic turnover.

I don’t think we should underestimate how beneficial it for Fox to have good shooting around him. In 4th quarters he now has Buddy, Barnes and Hali spreading the floor. Those guys are shooting 40% from 3. How many PG’s in the league have that kind of shooting around them, especially ones that thrive on the ability to drive to the rim?

From an article @ Defector:

I assumed Fox would go on the attack after Biden became president, but I never expected this sort of output.

What does Biden have to do with Fox’s evolution?

It seems to be a joke, about Fox (the TV outlet) attacking the new president.

Hence, “…Fox would go on the attack after Biden became president…”

Oh, +1. Didn’t see it in the article. That must be a reference to the comments

It’s very clear on that sentence.
No need to read anywhere else.

From what I have observed during the past few games, his improved outside shooting opened up his game. Opposing guys starting to play him tight on the perimeter but using speed and quickness, he just gets by them going to lane. Last night’s game vs the Pels featured 2 of the better defensive guards in Bledsoe and Ball.

Improvement on his FTs and decision-making will be the keys to his and the team’s success this season.

Last edited 1 year ago by Kui
0

I’m happy with the growth, let’s see if we can keep that consistency.

i was scared of what he was showing in the preseason, but fortunately it looks like Fox/Hali can lead us to the playoffs for a long time

Too good not to share for the non-Twitter crowd.

That’s a lot of fines incoming?

You’re obsessed with masks. Guessing you were ahead of the curve and wearing multiple masks at once. 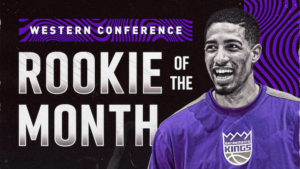 Also here’s a premature “STAMP IT” for tomorrow.

Nice! If we had signatures, I’d probably borrow that from you! 🙂

I think that Kosta thinks that DeAaron Fox thinks he is!!!! I think? Nah .. I’m going

Last edited 1 year ago by ZillersCat
2

It’s yours to have my guy.

How do you insert a gif here on wordpress?
<img src=”https://giphy.com/embed/ixYRj3H9HOzWE”>

Last edited 1 year ago by Falconsfury
0

Just copy the link itself. You don’t want to include the Img src = code.

Prince of all Saiyans

Fox playing at this level changes the entire direction of this franchise.

Fox is very cerebral and has the maturity to understand how to develop leadership. I was a bit frustrated at his slow progress but he’s more the type of star that is constantly getting better and not rushing it. Year 4 or 5 is the perfect time to really turn it up a notch. I think his strategy is wise, he may turn out to blossom a lot more than myself and others had expected in these next couple years.

This is one fine piece or writing/reporting.