... And just like that, we have meaningful basketball again. The most regular, by-the-books off-season in ten plus years for the Kings has finally run its course. The rookies selected, free agents convinced, off-season weight added. The agents have been satisfied, in currency or cruor (well, most of the agents, anyway). The rumors taken out back to the woodshed with nothing to show of a return visit. The roster is set. A brand new feeling in the air, same as it ever was at this time of the year. The wagers are placed, takes pre-heated and waiting in the mylar-lined minds of every fan.

All that's left is the basketball and eighty-two opportunities for success and failure.

Welcome to the most important Kings season in 16 years!*

For the first of at least eighty-two opportunities: Let's talk Kings basketball.

Where: Moda Center, Portland, OR

A Less Insipid Love: When the season rolled around last December, I jumped in with a lot of energy - a mix of trust in a new regime to make necessary changes and tickled by the allure of the unknown that comes with new eras... and left writing last May without any idea whether or not I was going to have the stomach to return for my seventh season of writing previews for you all. Apathy's stain on the soul takes time and effort to remove and like many, many Kings fans, I bowed out of last season's drama drenched in the stuff, consigned to just let it soak into, and drip off of me and my thoughts on this franchise for the foreseeable future. A decade and a half plus of rooting for the law of averages to start kicking in for our team and then seeing zero results can, and will, do that to us.

Fast forward to the night before the regular season and no big moves were made in regards to coaching or talent upgrades, the Kings drafted at a position of strength from their high lotto spot and signed bench guys in free agency. And yet, here I am, despite nothing truly changing. Here we all are. Why? Did winning a Las Vegas Summer League championship or going undefeated in free agency mean that much? No. Did Monte McNair unlocking his Twitter account break some icy hold on our hearts? Not anyone that I know.  So then why Kings fans? Why? Why do we do it? Why get up? Why keep tuning in? Do we believe we're fighting for something, for more than our survival? Can anyone tell me what it is? Do you even know? Why Kings fans? Why do we persist??

Because we choose to.

I sit here every day, listening to radio hosts get way too hyped over a Davion Mitchell stop in pre-season or a puffy shouldered Fox, and I want to believe. Against all odds and logic, I want my team to win - a game, a week's worth of games, the trade deadline, an upset in the first round, the whole goddamn thing. Do I think the Kings can achieve much of any that? No. Hell no. But... if you corner me, I mean really corner me, then crack me open and ask my heart to ignore my head for a second? Yes. Yes, I do. And I think you do too.  The Kings can win, win way more than anyone predicted and shock every single soul on this earth except the one ignoring all logic and reason living somewhere just south of our aortas.

We're Kings fans - this is what we do.

This franchise has a lot of questions to answer. Is De'Aaron Fox ready for All-Star level attention, from the media and from other teams? Does Hali have a sophomore leap in him? Can Davion Mitchell possibly live up to many of our expectations? Can anyone define defense and/or exhibit it for oh, say, 36 minutes a night? How can Marvin Bagley's agent ever expect to put a foot in his mouth with his head that far up his ass?

This season feels... different. It isn't optimism, it isn't outright pessimism either. We've caught wind of all the same old buzzwords: chemistry, accountability, playoffs, and they don't exactly ring false right now. I certainly can't give myself over to do another "What if Vlade's Right?" article. I'm not buying, not just yet.

But, and this maybe the Kings first win of the season here, I want too.

The Dame of the Game: Okay, so let's talk about the actual game for a moment. As far as openers go, this could be a lot worse for the Kings. Sure, there's always going to be the green light that burns at the end of the dock across the lake from Daryl Morey's mansion - the supreme basketball talent that Damien Lillard is sure ain't going anywhere before tonight's game and as long as Portland has him healthy and focused, they'll stand a half-way decent shot of taking any game they play. CJ McCollum started off last season on a tear with truly All-Star level stuff before injuries derailed a decent part of his season. Jusef Nurkic is going to be huge for them this season and Larry Nance Jr. is a really underrated move in my eyes, especially with what he can do for Portland on the defensive end.

If the Kings want to do anything this season, teams in the Western Conference's midsection is where they're really going to have to get things done. There just aren't enough truly bad teams in the West and teams like Portland are at least a bit vulnerable to the whims of the basketball gods. They've got an iffy bench, an unproven head coach and tremendous expectations put upon them by an antsy superstar and a GM with what can only be low-grade narcissism at best.

Can Fox and Haliburton cancel out Dame and CJ? On a given night, yeah, alright. Can the Kings bench outperform Portland's? Absolutely. This game is going to come down to guys like Harrison Barnes and Richaun Holmes outplaying their matchups. If Barnes pulls a disappearing act or Richaun still hasn't shaken the rust off from pre-season, the Kings will start a season of hope with an 0-1 record.

Those fools. Those god-forgotten idiots. They thought they stood a chance against MVP caliber Fox?? Against Sixth Man of the Year candidate Buddy Hield?? Against world-eater Davion Mitchell???? Against EXECUTIVE OF THE YEAR MONTE MCNAIR'S SACRAMENTO KINGS?!?!?!

To prevent spam, our system flags comments that include too many hyperlinks. If you would like to share a comment with multiple links, make sure you email [email protected] for it to be approved.
Subscribe
Login
Please login to comment
57 Comments
Oldest
Newest Most Voted
Inline Feedbacks
View all comments

First (for this season)

My wish? That this is the beginning of Luke Walton’s 15 game farewell tour.

I have two thumbs! Why can’t I vote for this twice?!?

as said on twitter: WE ARE IN THE POSTSEASON (of the preseason)!

Ah, the beginning of another Kings season is upon us!

Supposed to be this (fitting that it failed to load at first!):

In Portland this time we’ll see Dame—
Should be a more challenging game.
To start the real season,
Please give us a reason
To hope this year’s not more of the same!

Not only are Will Previews back, but Jman rhymes are back too!!!!

Dame has an OFF NIGHT! Davion!

This matchup is going to be the best thing about the game!

NOW the season has started.

I blame the Kings for raining on my parade, it’s literally been gorgeous here the last several days and today the rains are returning.

Would love some rain here in Mordor

It’s your own fault for living in Mordor!

Once we take care of this ring business (championship ring, that is), I can Ramble On back to the Shire.

Besides, I really can’t spare the moisture.

I kinda hoped it would develop into a thread with a whole bunch of alternative lyrics.

And who would’ve thought? It figures.

I do think that Sacramento can win this one, which is important, since I’m not terribly confident about the next half-dozen.

I think they can win this one.

If they score more points, or if the Blazers score less points, we have a chance. 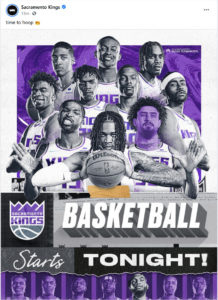 Someone is going to be telling their agent to send out a tweet voicing their displeasure that they’re missing from the poster. 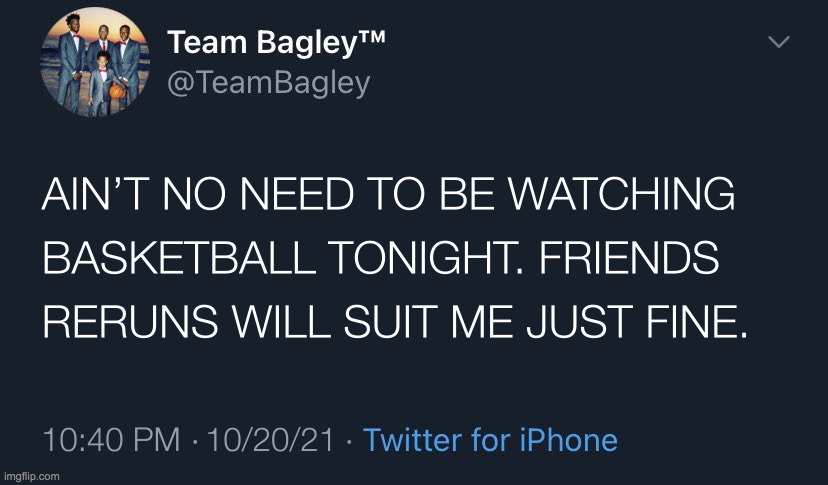 Great, but opting for House or M*A*S*H reruns would have been even greater.

Looking forward to tonight’s game! Enjoyed watching Bjelly last night. Hope he continues to play well for the Warriors. Should be a fun one tonight, interested to see how Mitchell does in his first game. I have a feeling the Kings will pull this one off. GO KINGS!

Echo everything you said. Plus am up in Portland and my son is taking me to the game. If you wait long enough this could happen to you. First season opener I have been to in decades. Go Kings!!!!

That’s awesome! My oldest is still in high school so I’ve got a few years until they take me! Enjoy your night and I hope the Kings reward you with a win! Go Kings! 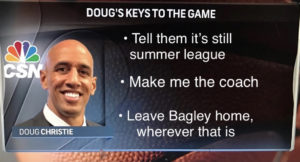 Why do we persist??

For me, I think (hope?) the front office is smart enough to actually make this team better when the roster actually changes. I do like a number of the players, but don’t believe in the roster as a whole, or the coach. Changing the coach isn’t enough to make this a winner. Impatiently waiting for the inevitable roster changes…

Truly a test of endurance.

Truly a test of endurance.

That pretty much describes all of us!

Things that won’t happen but would be kinda awesome: “Okay, Davion. You are Lillard’s shadow. Every minute he’s on the floor you’re on the floor. Make his life hell. That’s The game plan.”

There’s this famous Dutch soccer story about a defender of Feyenoord who got tasked with guard Johan Cruijff. His coach told him to not lose him out of sight for one second. So at halftime he followed Cruijff into the Ajax locker room and had to be shoved out by other players.

Will, not to be a dick, but there’s no such thing as the law of averages. It’s regression to the mean. And the mean is that the Kings suck.

Why be a dick if you can be a jackass central?

You guys are regressing to the meanies!

So…is it time to get rid of SlingTV?

The pregame show is painful

Not sure if this is the game thread, but it’s dance time!