Webber has been a finalist before, and has an incredible strong case for admission. The only reason he isn't already in the Hall is because the NCAA pretends the Fab 5 era didn't exist, doesn't count any of those stats as official, and the Hall of Fame is notoriously slanted toward college hoops. Webber was a five-time NBA All-Star, averaged 20.7 points, 9.8 rebounds, and 4.2 assists per game over 14 years. Webber ranks 98th all time in NBA history for points scored, ahead of Hall-of-Famers such as Grant Hill, Bob Cousy, Spencer Hayward, Tiny Archibald, Joe Dumars, and James Worthy.

Rick Adelman should be an open-and-shut case for induction, as he currently has the 9th most wins of any coach in NBA history. Adelman's teams won 58.2% of his 2,002 games coached, for a career total of 1042 wins.

Yolanda Griffith also seems like a no-brainer for induction. Griffith won the WNBA MVP award in 1999 with the Sacramento Monarchs, and also won Defensive Player of the Year that same season. Griffith was also named 2005 WNBA Finals MVP as she helped lead the Monarchs to a WNBA Championship. Additional accolades include being an 8-time All-Star, 2-time All-WNBA first team, 3-time All-WNBA second team, and is regularly recognized as one of the top WNBA players of all-time. She's also a two-time Gold Medal winner for the United States, winning in 2000 and 2004.

Best of luck to all the nominees, let's hope it can be a celebration of all things Sacramento.

No Jerry Reynolds? No interest!

Reynolds Remembers……..Not Being a Finalist for the Basketball Hall of Fame.

Haha, are you referencing Jerry’s protest campaign when Richmond didn’t get into the All-star game, so Jerry made the “No Mitch, I bitch.” slogan?

I saw Yolanda Griffin at Vic’s Ice Cream when I was younger and she let me take a picture with her. The good ol’ Monarchs were fun to watch.

Yolanda was my favorite Monarchs player growing up. So glad she’s getting into the Hall of fame. Well deserved.

She’s a finalist, but she isn’t guaranteed to get into the HOF this time.

Agreed, Adelman & Griffith are locks. Webber has a strong case, but…

I’m certain that the reason he isn’t already enshrined is because he treated a lot of people like garbage on his way to superstardom, and a not-insignificant number of them get to cast ballots each year. I get a sense of schadenfreude at making him wait, when for so much of his life, he’s enjoyed instant gratification and a lot of ass-kissing. Delaying his ascension is a slow twist of the knife to exact some matter of payback.

In his prime, he was as good as anyone in the game. I think that this may be his year.

All three of these candidates are incredible.

And as far as Sacramento basketball goes, they’re the best.

YO should be a first-ballot hall-of-famer. She was the anchor of that Monarchs championship team. One of the best WNBA players ever. Did it on both offense and defense. 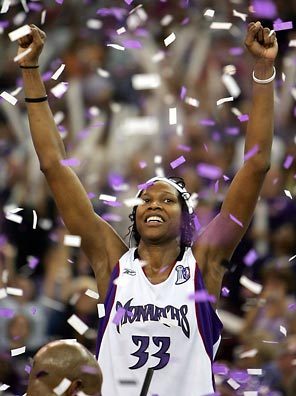 Put them all in! Do it now!

Get to da choppa!

Chris Webber has no business in the Hall of Fame. His win shares is number 40 among current eligible retirees… far below Sam Cassell for example. His win shares/48 minutes are far below any of the other nominees. Ben Wallace…deserving, Marques Johnson..deserving, Paul Pierce certainly deserving. Michael Cooper undeserving. Someone missing? Buck Wiliams.

Remember that win shares are team dependent. If player A was on bad teams and player B was on good teams, player B will have more win shares even if they both contributed equally. Try a different stat. Any different stat, really.

Yeah, agree on the Win Shares (although I might argue a Hall of Fame type player should increase a bad team’s W/S by himself).

But the rest of his resume isn’t HOF caliber either, in my opinion. Five All-Star appearances in fifteen seasons. His career TS of 51.3% (not great, for a big). His rebounding rates were ok, but not dominant.

Last edited 1 year ago by Otis
1

Additionally – I think you could argue Vlade’s case for the HOF (just looking at his work in the NBA) as successfully as C-Webb’s.

Michael Cooper was on VERY VERY good teams and his Win shares are very, very low. In fact he is in the 160’s of current eligible vets.

So I will stick with my stat.

Wouldn’t Player A just have a bigger piece/share of their team’s win pie versus Player B?

Player A has fewer win shares to go around than player B. It might be useful to index Win shares to what percentage of a team’s win shares a player contributed. (A rate instead of a total).

Comparing win shares between equivalent players on different teams is basically saying ‘Player B’s teams won more games,” which is useful, but not the only stat that matters.

That being said, I think win shares are calculated differently depending on the source.

Last edited 1 year ago by Carl
0

Us as Sacramento Kings fans need this. We’ve taken too many losses over the past 15 years, it would be nice to have the national people remember what the Kings were. Adelman and Webber getting in would be HUGE for this city and this organization.

Obviously Yolanda is a first ballot and that is awesome too.

Some good news during a tough a year if they all get in.

For the people that mentioned Jerry Reynolds – do broadcasters have to wait the necessary years like players? If not, he should’ve been in this class too.

What about the G Man, it would seem to me that there are lots of good local broadcasters who have put in a lot of work for their respective teams. Seems unfair that G Man has done a great job for one of the leagues more unfashionable teams probably won’t get the acclaim that he probably deserves