That's how many three pointers the Kings made against the Charlotte Hornets last night, setting a franchise record.  It was an offensive explosion that it felt like we had been waiting for all season.

Buddy Hield led the way with 26 points, including 8 of 17 from three.  He had one field goal attempt that wasn't a three... and it was only because his toe was on the line.  Just take a look at his shot chart: 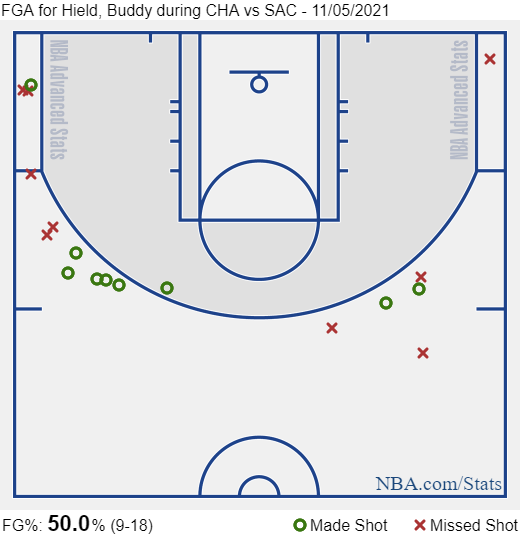 The Kings as a team got it going early and didn't let up.  The Kings were 9-15 from beyond the arc in the first quarter and got out to a 41 to 22 lead.  The Hornets came into the game with the league's best offense but also the worst defense, and you could tell early on the Kings were enjoying the increased freedom.  De'Aaron Fox didn't even score in the 1st quarter, but he was able to penetrate the paint at will and find open shooters.  Terence Davis, who had recently found himself out of the rotation and had been off to a bad start this season, came in and scored 8 points in that opening quarter, including 2 of 3 from beyond the arc.

The Kings are a relatively small team, oftentimes playing just one big man.  Charlotte is even smaller, and it showed tonight.  Richaun Holmes, who might have had a small grudge considering the Hornets were one of the teams that could have (and should have) pursued him in the offseason, dominated the paint.  Holmes scored 23 points on 9-12 from the field and set a career-high with 20 rebounds.  The Kings as a team shot 55.2% from the field and still managed to get 13 offensive rebounds for an absurd offensive rebounding rate of 38.2%.  Mason Plumlee, Charlotte's starting center, finished with just 6 points, 6 rebounds and 6 fouls in just under 22 minutes.

The Kings let their foot off the gas slightly in the 3rd quarter, but not by much.  Gordon Hayward got going, scoring 14 of his 25 points in the quarter.  The Kings still took a 17 point lead into the final frame, but we've seen this story before and a few minutes into the fourth quarter I was starting to get nervous, as Charlotte made it a 12 point game with 8:18 left.

The Kings responded in kind though, with Davion Mitchell and Buddy Hield scoring 8 and 9 points respectively over the next 7 possessions to push the lead up to 25, effectively breaking Charlotte's back.

This was the closest to 48 minutes of basketball we've seen from the Kings this season, and it resulted in their biggest win to date.  While Gordon Hayward (25 points) and LaMelo Ball (24 points) got their own, nobody else on the Hornets was able to do much.  Miles Bridges and Terry Rozier combined for 7 of 28 from the field.  Every single King who played had a positive +/-.  This was a complete win, and I hope to see more like it in the future.

Who could it be but Richaun Holmes? On a night where his teammates were draining three after three, Holmes was the Secretary of the Interior.  Holmes just might be the most efficient big man in the entire league.  After last night's game, he is averaging 15.9 points on a ridiculous 69% (nice) from the field.  The 20 rebounds is icing on the cake too.  Tristan Thompson and Alex Len are both capable bigs, but Holmes provides such versatility on both ends of the court that the Kings miss him tremendously whenever he's off.

The Kings continue their home stand as the Indiana Pacers come to town for an early 3 p.m. tip-off on Sunday.

I can’t remember the last time the Kings won a game and it didn’t take every single second to accomplish.

My thoughts exactly. I wonder how many years it has been since a comfortable win.

I don’t remember the last time we had a positive green number in points diff. We’re at +2.2

Last edited 2 months ago by Kosta
3

After the game, Joerger said “Nobody saw this coming.”

Last edited 2 months ago by PretendGhost
1

I’m just curious as to what the analogy here is. If there is any, for that matter.

Other than “the Kings have to prove they’re good”. And to which I’d respond:” Yeah, and? Your point is? I knew that already.”

Would you have bothered with a next day recap if it was an ugly loss?

But this one’s definitely good enough to savor a few days.

And when will Greg put up the game thread for last night’s game?

Is this the game thread?