Harrison Barnes is usually working out three to four hours before games and he gets his lifts in during the early morning hours or before practice. This is according to De'Aaron Fox, who said Barnes told him he has been on this routine since he was a rookie. Barnes likes to go through full workouts to get a sweat in and calm down a little before games.

Fox said Barnes' work ethic has been this way since he arrived in Sacramento. This is why Richaun Holmes wasn't surprised when the 29-year-old dropped a career-high 36 points on the Portland Trail Blazers Wednesday night.

"Harrison, everybody on the team will tell you, he's always putting his work in. He's getting his work in early, late, so we expect that from him. The amount of work he puts in we expect nothing less from him," Holmes said. "He can be that type of player for us every night without a doubt and we have the ultimate trust in him."

Barnes shot a blistering 8-11 from three (a career high for threes) in the win over Portland to go along with 9 rebounds, 2 assists and 2 steals. The Kings would certainly be starting the season 0-1 without him.

Check out the highlights here:

Head coach Luke Walton said after the game that he wants Barnes taking a lot of threes this season.

"One of the things I've challenged Harrison on all summer and even last year, is we need him to be aggressive, and I don't mean that as go one on one and take a bunch of shots, but I've challenged Harrison. I want him getting eight threes up a night. He's a very good shooter and there's no reason he can't make those shots," Walton said. "We needed all of those points tonight and that's really how we want to see Harrison playing all the time. Some nights they'll go, some nights they won't, but we definitely want him taking those shots and he was a big reason why we won tonight."

Barnes is a very good, versatile basketball player and helps put pressure on defenses, especially when he is on the floor with Fox. Him taking eight threes a game would certainly be a change for him and this team. If he can get back to the 40% mark, or slightly above though, it would open the lane up even more for Fox and the offense.

Barnes is a hard worker who understands and accepts his role. Sometimes he can defer a little too much to the primary scorers on the team and does get beat occasionally on defense, but generally, him being aggressive the way he was Wednesday is always going to be a positive for the team. On nights when Tyrese Haliburton isn't on from a scoring perspective (like last night), or Fox is struggling, having the ability to rely on Barnes to fill the scoring void is very much needed.

If he can stay healthy and keep up steady production, he could be a big factor if this team is going to get better this season.

Watch the full media sessions below.

I sure would take that 18-19 clip and percentage this year. It sure goes a long way to opening up the middle for Fox and Holmes to do their thing.

8 x 82 games would be more than he has taken during his entire 158 games in Sac. (not counting yesterday).

Last edited 11 months ago by Carl
6

This is what section214 told me over at the old site when I joined in 2008 just before analytics and advanced stats swept the NBA.

I want him taking them in those last 16 as well.

Barnes is a pro, and a definite asset to have around to show newer guys how to have a career in the NBA. He’s reliable, on the court and off, and I’m confident that I’m never going to hear him airing out team business in the media.

Barnes is an adult.

Ah, now that is the Luke Walton we all know and despise. Throwing up inane individual goals and numbers, devoid of context.

HB, the stretch 4 we always wanted.

Barnes vs Nurkic next game

Not sure if this has been shared here or elsewhere, but you all have to watch this:

This church is pretty cool with cussing!

Haha, thanks for sharing that, Adam!

I think when we finally do make the playoffs, many non-Kings fans will hop on our bandwagon to root for the Kings with us because we will be the cinderella team that has been miserable for so many years.

Last edited 11 months ago by Kosta
0

I feel so many things watching this. Mostly, WHAT THE HOLY FUCK. But also, this sweet calmness that there’s hope for me.

To me, I felt that if TKH were support meet up in a church, this is totally what it would look like.

I had not seen that, thanks for sharing! Two things:

Who made this? It’s so good!

It would seem that I AM ROOSTER.

Vlade couldn’t re-sign with the Lakers fast enough! WHY AM I THE ONLY ONE TALKING ABOUT THIS?

Take all my “likes” today, sir, this is excellence…

“Luke says … “ is my queue to ignore whatever comes next!

OT: Undefeated Sacramento is listed seventh in the West standings. Damn you, alphabet!

I am trying to see if “Barnes taking 8 three pointers per night” is on the same level of idiocy as “I want Hield to dribble the ball up the court as much as possible”. I thought one of Barnes biggest criticism has always been not efficient when asked to be the 2nd/3rd scoring option for his team?

That was in the past. This season everything is better. 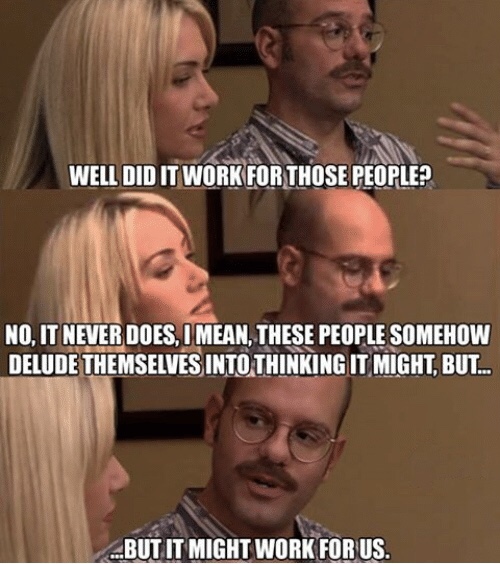 Having a hard time reading this with all of that clattering going on.

The odd thing about Barnes’ history is that he was at his best from deep when he was shooting it at a higher volume. He may be the poster child for today’s NBA: at the rim or behind the arc and nothing in between.

It’s not idiocy when the “elite” shooter on your team shoots 39% on 10 attempts per game with a few of those being of the chuck variety, while a smart offensive player who doesn’t force shots shoots 39% on roughly 4.5 attempts in his Kings career.

Ppl saying he can’t be efficient with higher volume are still looking at Dallas Barnes who loved the midrange, but that isn’t him anymore. He works attacking the rim, shooting 3s, and taking advantage of mismatches in the post and in the paint as he’s gotten older and stronger now. If this version of Barnes is the 2nd option then I think we’ll be alright and he’ll easily have a career year.

Last edited 11 months ago by Kangz_Landing
2

They seem to have a good rapport: Barnes and Walton.

I’ll say this about Luke Walton, he is good at building rapport.

Clearly, he has developed good rapport with Fox, Barnes, Holmes, and losing.

True, but only from a purely factual standpoint.

Kings could go 82-0 and fans would still be complaining about Luke.

I can’t believe fans are still complaining about Luke!

Disappointed in you Rob we need to be 98-0. No first round playoff exit after an undefeated season!