Well, well, well - if it isn't the consequences of just starting to feel hopeful for this Sacramento Kings squad! On Friday, the Kings felt it prudent to sit De'Aaron Fox as a supposed precaution after bumping a knee in practice ... and the Kings were subsequently bludgeoned into submission by a team with no point guards outside of Michael Carter-Williams and a total of ten players. It was ugly. Harrison Barnes was invisible a lot of the night, Tyrese Haliburton remembered he was a rookie. Hassan Whiteside and Nemanja Bjelica were the only ones keeping the game from getting fully out of control. Let's not delve into that any further.

The Kings are now in danger of sliding after their 7-1 kick in the pants. They have a very capable Grizzlies team today, a Nets team that is out for blood tomorrow and later on in the week there's a Miami Heat team looking for a second chance to pummel the Kings. This week could get real rough. Let's talk Kings Basketball!

Your Guy's a Morant: Gonna get this out of the way so no one can misconstrue what I say: Ja Morant is the bomb. The guy is a ton of fun. Any media figures trying to pit guys like Fox and Morant against each other can be entirely ruled out all together. There's one in particular that I'm thinking of - he's obsessed with stuffing himself in a locker over and over again then going on any podcast or radio show that will have him to brag about how cool he is for spending recess trapped in the dark with his dirty PE shorts. He's a dweeb and isn't worth the time. End of that conversation.

So, this Memphis Grizzlies squad is young, a ton of fun to watch and are absolutely smacked with injuries right now. Outside of the devastating injury to Jaren Jackson Jr., Memphis is also likely to be down the hot shooting rookie Desmond Bane, Brandon Clarke, De'Anthony Melton, Killian Tillie and Sean McDermott. They've lost 5 of their last 6 games and in a fashion that hasn't been particularly pleasing to the eye - those five losses are at an average of 15.4 points a contest. This isn't in anyway trying to say they're garbage. Those losses were to Indiana, Houston, New Orleans, Toronto and the Los Angeles Lakers, each of those teams having been problems for the Kings this season, as well. The Grizzlies are playing respectable basketball for the troubles they've been given and this isn't a game where Sacramento can afford to get silly and rest star players.

Let's jump in a little bit to how the Grizzlies have been able to keep afloat during these rough seas. For one, these dudes are unselfish as hell. Ja Morant and Tyus Jones are both naturally unselfish players, Morant averaging just a hair under eight assists a game and Jones coming off the bench averaging over five and a half. Expanding it out even further, this team is always looking for the open man: they're league leaders in team assists. The Grizz get a lot of their offense from inside the arc, as well. While they're the exact middle-of-the-pack in terms of three point percentage, they take the sixth least. They're third in two point attempts, though they're also right outside the bottom ten in terms of percentage there. They also are worst in the league at getting themselves to the free throw line, unless a guy like Richaun Holmes has one of those games, you can reasonably expect... wait, no. This is the Kings. Don't reasonably expect anything. I'm not sliding into that level of confidence in the Kings.

On the defensive end of things, Memphis is best in the league at steals, 12th in blocks and 13 in total rebounds. Overall, the Grizz are in the bottom ten in points scored per game, just out of the top ten in opponents points per game and run at just above a league average pace. Just like every other average team in the NBA they can get hot and no team in the world enjoys helping a hot team get hotter than the Kings. This is going to be fun one, if De'Aaron Fox can play. If he can't well, just try to close your eyes and think of the countryside for awhile.

Also, last thing: if these season is about to go down the tubes for the Kings based on a silly injury - tonight is going to be the night it happens. Grayson Allen, an absolute turd of a human being and a constant burden of conscience for well-meaning organizations and coaches, seems to be healthy and active tonight. His underhanded and dirty style of defense is meant to frustrate players and take their heads out of the game - one day he's going to truly hurt someone. Kangz luck says that could be during a game like tonight. Also, this counts as a reverse jinx. Rest assured of our Sacramento Kings health.

For the other side of things, I say go run on over to our old friends at SBNation, Grizzly Bear Blues. They've got a very talented team of writers over there and deserve more eyes for the great work they do.

Hoping Fox won’t again be a scratch
Without him the Grizz are a tough match.
Because Ja sometimes rocks,
Not so much against Fox.
Put a stop to this brief losing patch!

bumping a knee in practice

BREAKING: Tonya Harding was spotted skating away from the Kings practice facility.

By the way, love the Valentine’s Day GIF on the logo! I love Richaun Holmes’ push shot too.

And I hope all you with a significant other have a nice Valentine’s Day.

As for me today:

Last edited 1 year ago by Klam
5

…better with the music, of course:
¬ Show me the meaning…of being lonely ¬

You’re really down on Grayson Allen. I remember him from Duke and his early years in the NBA as a good guy. In college he was Coach K’s coach on the court. Was thinking maybe Kyle Guy could be our Grayson Allen. Is it true that he’s a dirty player.

Wishing a happy Valentine’s Day to all my fellow masochists who bear the title: “Sacramento Kings fan” 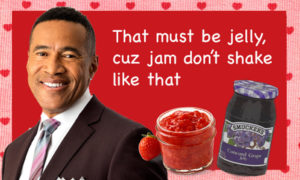 One more for good measure… 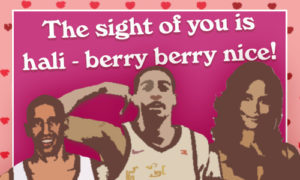 Fox plays. Not 100% sure. Lets put it at 85-95%. Kings thought they could win w/o him v ORL and give him 4 days off to recover from a bone bruise heading into a back-to-back. They got burned. Coach got burned, miscalculating as he is inclined to do.

Nothing is guaranteed when you are running CoJoSlo and Buddy Yield, he of the attached trailer to his shorts, for a combined 50-60 minutes, he should have known better.

How do I know Fox was not bad off and extremely likely to play tonight? Simple, an injury that knocks a player out is usually linked to an acute event. In other words, did something having in the previous game that sidelined said player? No. Fox finished the game v 76ers. Did he hobble off the floor? Nope!

The same goes for Marvin Bagley, aka Marvin Badly, aka Moppin’ Badly, aka Starvin’ Badly, take your pick. The latter is to say, Marvin is “starvin’ badly” for points, thirsty to be a 25 PPG if ever a player existed! Okay that is not completely fair, since his play is not quite that deficient, but not entirely inaccurate either 🙂

I hope Marvin plays, otherwise I am inclined to nod off watching Bjelica play on the floor at the same time as CoJoSlo, I would rather watch the Lifetime Network than these two duds!

There was an acute event. The knee contusion happened in practice. Sure though, it’s possible they just wanted Fox to get a night off

Between the 76er and ORL game?

Okay I stand corrected then. I dont care about being right, I care about truth. I do not consume Kings media, cannot be bothered with the mundanity of it but worked against me in this instance, oh well can’t win em all 🙂

According to Luke Walton, De'Aaron Fox and Marvin Bagley are both feeling better. Nothing set in stone for them to play tonight, but if they are ready, they will start.

I only listen to Kings media, that’s why I know this team is probably going to win out the rest of the season and the Kings FO is always right! Lol I don’t blame you for not listening to it

can someone tell me if Fox is playing? I’m having a wilderness retreat in my driveway and don’t want to leave it for bad basketball.

I’m not making my predictions until we know he’s playing, or it’s 1 minute before tipoff!

De'Aaron Fox is on the court warming up. That is a very good sign for the Sacramento Kings.

Alright boys let’s get this double u

DaQuan getting the start at the 3 with Harrison at the 4!

Fox in, Bags out