Are you still here? You have one resilient spirit, outmatched by absolutely no other fan base in the world (at least we have that going for us, right?). The flames are still raging here in basketball hell, Twitter fingers all across the greater Sacramento area are exhausted, and although it seems we say this every few months, this feels like a new rock bottom. And as if things couldn't get any worse, we now had to watch the Kings take on the #1 team in the league in the Utah Jazz. Although you probably don't want to, let's see how they did:

Honestly, I can't even articulate how I wanted this game to go. If they win, this team makes literally zero sense and my brain explodes. If they lose, that pours more salt into the losing streak wound and the pain continues. Tonight was the latter, except with the special caveat that the Kings actually put themselves in a position to win this game through three quarters. They ultimately fumbled the bag in the fourth, and my minimal hopes were squashed, but we can at least say they weren't embarrassed tonight. Silver linings, right?

De'Aaron Fox throws it down against Utah! pic.twitter.com/KM2l8947VV

Tonight's crown for the King of Kings gets to rest atop Richaun Holmes' head for being damn near perfect tonight. Richaun maintained perfection through the first half, contributing 21 points on 8-8 shooting from the field, giving the Kings a six-point lead going into the tunnel. Although he eventually missed a shot in the third quarter, he didn't let this keep him from being aggressive. He finished with 25 points in all, but spent most of the second half cleaning things up on the defensive end for the Kings as he completed his double-double with 1o rebounds.

I’m going to be optimistic today. Buddy is playing better on both ends of the floor and when HB decides he wants to ball, he’s solid force.

That Fox dunk was insane. Maybe next year???

Is Greg ruining the comments sections now too?

Just ignore Bogi dropping 32 and hitting 8 3-pointers to lead Haws to win with Ice Tray out. Also ignore other teams stockpiling draft picks and teams like Warriors and Thunder about to steal Wolves and Rockets top 5 picks. If you don’t sign Bogi, then you should be tanking all year, and not even signing any free agents, just roll out some 2-way G-league players and let the rooks suck. Damn shame this franchise, Vivek doesn’t know how to get out the way.

You didn’t notice that we seem to be doing a amazing job of tanking?? Of course this is the Kangz so when we try and compete we immediately fail miserably and tank like never before! Remember with the Kangz up is down and down is up!

what is on the court right now is on Monte. So far he has proven to be the GM we did not need.

He is not the actual GM anymore than Pete D or Vlade were ! We are being Viveked !

not true. it’s deeper than that.

making a run at the play in game were moves monte made, not vivek. Is Monte fired if he doesnt trade Bjelly and cojo? No. he made those decisions and they are on him, not vivek. You think if monte trades bjelly for 2nd round picks he gets fired? no. Monte made stupid decisions that will cost us in the future. He has not made a bad situation better. he has made abad situation worse while luckily selecting Haliburton.

My comments are being cancelled!

Is it the comments glitch, or is it who really fucking cares anymore?

If an NBA team never makes the play-offs, does it really exist?

The Monte flipflop season. My god, what a joke. How is it that this stupid shit keeps happening to our favorite team. They continually do the opposite of wise. Seemingly obvious decisions are opposed by some invisible force of ineptitude. It’s pathetic.

It’s not invisible, it’s Vivek. He keeps putting people in these roles. He needs to go, and soon

Last edited 1 year ago by RikSmits
3 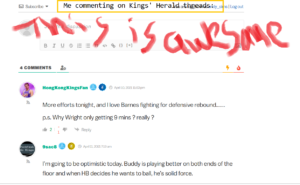 Is the glitch really gone?