18 former NBA players were arrested this morning on charges of defrauding the NBA's Health and Welfare Benefit Plan of around $4 million. The story was first reported by Tom Winter and Jonathan Dienst of NBC News.

BREAKING: 18 former NBA players have been arrested and charged federally for defrauding the NBA’s Health and Welfare Benefit Plan out of approximately $4,000,000, law enforcement officials say.

Reported by @jonathan4ny
and me.

Former Sacramento Kings players Antoine Wright and Terrence Williams are among those involved, with Williams allegedly being the orchestrator of the scheme.

The indictment says that former NBA player Terrence Williams “orchestrated” a plan to submit false claims to the NBA’s Health and Welfare Benefit Plan. Williams allegedly offered to supply false invoices from a group of former players in exchange for kickback payments to Williams

Some of the bigger names charged in the indictment include Tony Allen, Glen "Big Baby" Davis, Darius Miles, and Sebastian Telfair.

This is a surprising story, especially considering some of the players involved. Tony Allen made around $40 million dollars over the course of his career. Big Baby Davis earned approximately $32 million in his career.

It's unclear where this story goes from here or what type of punishment the players could face.

Lots of departed Boston players in there.

Last edited 11 months ago by Kosta
2

Big deal, like there are any of us that haven’t engaged in insurance fraud. 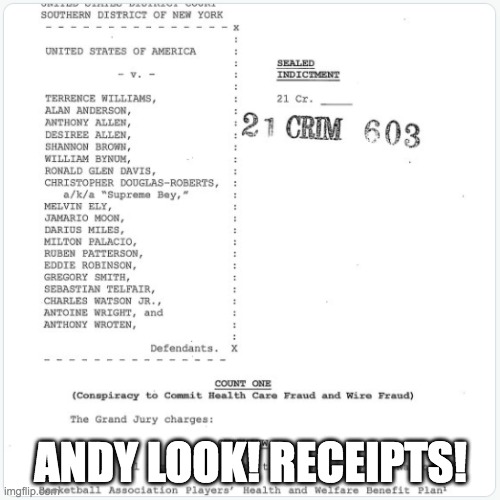 When will Luke Walton be added to the list

Luke was unsure of how the scam worked so he submitted his hotel bill to Kelli Tennant for reimbursement.

He needs to look at the tape first.

So, was Jeff David their financial advisor?

These guys are screwed, feds gonna drop the hammer.

Wow, this is certainly a big unexpected bit of news to see this morning.

Sure is. I wonder what the ripple effects will be from all of this.

…”and it’s all Monte McNair’s fault!”

I want to see a post called “Re-Draft: Indictment Roster + Marvin Bagley.” Is he still a lottery pick?

Wow! The NBA even got the feds involved to distract us from the fact that the Kings are going to be the best team in the NBA this year.

Wouldn’t it be nice to indict the Fed’s for fraud ?

Fedsfor was smuggling covfefe from Qal-anon and unmasked freedom from communism.

I think it might be correct, since “fed” is not a real word in this context and likely derives from a contraction of something like federal agent. So the apostrophe serves to represent the omitted letters, rather than a possessive.

I don’t know. Fed isn’t really something that’s used to refer to the government in general, maybe occasionally for the Federal Reserve, but they don’t generally stick their nose into criminal investigations. So, if not that, then all we’re left with is

Wouldn’t it be nice to indict the Fed is for fraud?

I stand by my pedantry. 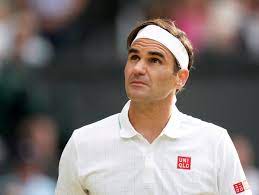 As someone who used to work in the health insurance industry, I find it hilarious that these idiots thought they could get away with submitting the same claim on the same teeth on the same day for multiple people. Did they really think that no one was going to notice?

I guess if they had actually thought about it, they wouldn’t have done something so stupid that’s going to cost them serious prison time all to split $4 million between 18 people.

I was just randomly thinking to myself the other day, “What ever happened to Sebastian Telfair?” The universe has answered.

I guess his $19M in career NBA earnings weren’t enough to live on.

Guess not. I’d be more interested in a material analysis of their spending. This seems to be part of a larger problem in professional sports. Why do athletes keep ending up in these holes?

Q: “Why do athletes keep ending up in these holes?”

Last edited 11 months ago by AmateurNerd
2

I think he is already in jail for a gun charge. He has had a pretty rough time post-NBA

Big Baby: Let’s do fraud guys! Allow me to demonstrate:

Last edited 11 months ago by andy_sims
0

What’s sad about this, is these are high level players to make it to the NBA, and they made very good money along the way, only to still feel the need to commit fraud for tens of thousands of dollars. Even Terrance Williams who only played 4 years in the NBA, and a total of 153 games, made almost $7M. That doesn’t take into consideration the money these guys made basketball leagues elsewhere. I feel like if most people were given $7M for 4 years of work they’d find a way to live the rest of their lives quite comfortably and without a need or to commit fraud.

I know that the NBA holds seminars for players to help them with ideas about needed steps in order to manage new-found wealth. I don’t know much about the kind of curricula that’s actually provided, but I like the proactive nature of it. You can offer advice, but what an individual ultimately does in determining who or how the money will be manged is up to them. I’m not sure how many of us would manage to play it smart if we signed a $25 million dollar contract while still a teenager.

Pro sports money should become generational wealth, but we see all the time that guys who were at one time worth seven or eight figures, find themselves broke, homeless, or worse. I don’t know what can be done about it, since even those that truly have an athlete’s best interests at heart can only make recommendations.

The advice the NBA gives is a great starting point, but it’s given all at one short, specific point in time at the beginning of the player’s career. To my knowledge, there is no long-term financial planning/guidance built in to the program. It’d be interesting to see what would happen if every newly drafted/signed player was automatically assigned a financial advisor whose job it is to set up the player’s finances for long-term security and success. As it is, they often go with whichever person is recommended by their uncle who knows a guy who knows a guy.

That seems like something that the players union would be interested in providing. Playing hardball to secure higher salaries for the players becomes meaningless if the players can’t hang onto it.

Hell, if I just got simply $1 million dollars I might be able to live a good chunk of my life without having to worry about financial stability.

this pussy is not for sale

It doesn’t count BRI either right?

How many of these guys can still play the 3 once they post bond?