Sacramento Kings rookie Tyrese Haliburton was named to the NBAâs All-Rookie First Team today, which was fully expected following his third place finish in the Rookie of the Year race. Haliburton is joined by Anthony Edwards, LaMelo Ball, JaeâSean Tate, and Saddiq Bey.

The only surprise here is that one of the 99 voters didnât put Haliburton on the first team. Full ballots get published tomorrow, so we will update this post at that time with the name of the individual who deserves mocking.

The Sacramento Kings released a statement from Kings GM Monte McNair regarding the news:

âWe are incredibly thrilled that Tyrese has earned this well-deserved selection to the NBA All-Rookie First Team,â said Kings General Manager Monte McNair. âHe embodies tremendous qualities both on and off the court, and we look forward to seeing his continued growth in Sacramento.â

Update: Full votes are now viewable online, and it turns out that it was Sports Illustrated's Chris Mannix who did not put Tyrese Haliburton on the All-Rookie First Team. He gave first team votes to Ball, Edwards, Bey, Desmond Bane, and Immanuel Quickley. What a joke. 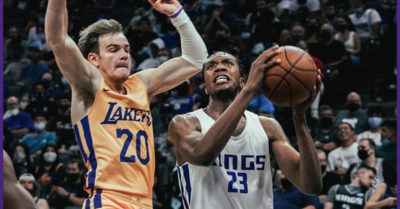 Who ever didn’t give Hali a first team vote is probably the same numbskull who voted Derrick Rose for MVP.

Did Mark Jones have a vote?

Tyrese 1st team all rookie exceeds what I hoped he could accomplish his rookie year. But, this is only the beginning hopefully. Rookie teams can often be misleading.

They’re only misleading if you assume that they’re anything more than a snapshot of a moment in time.

The rookie team award a tiny bit of value to me until they mentioned that Bagley was also voted on.

Please do not start any marketing campaign that brags about Bagley and Hali being on the rookie team. Haliburton does not deserve the connection.