According to Adrian Wojnarowski of ESPN, the Sacramento Kings have acquired Los Angeles Clippers center Mfiondu Kabengele for a protected future second round selection.

Clippers are trading Mfiondu Kabengele, a future second and cash to the Kings for a protected future second-round pick, sources tell ESPN.

The wording by Woj is interesting, as it's rare for teams to trade protected second round picks, unless they're really nothing at all, such as a pick that's protected for selections 30-55, or something along those lines. Sacramento likely surrendered nothing in the deal. Meanwhile, the Clippers will drop $2.6 million below the hard cap in the deal, which will help them at the trade deadline and in the buyout market, and they'll send a future second round selection and cash to the Kings as compensation.

From Sacramento's side of things, they'll get a free look at a former first round pick. Kabengele was taken 27th overall by the Los Angeles Clippers in the 2019 NBA Draft after averaging 10.3 points and 5.3 boards as a sophomore with the Florida State Seminoles. With the Clippers this year, Kabengele hasn't gotten many opportunities, as he's averaged just 1.2 points and 0.6 rebounds in 4.1 minutes per game. As James Ham notes, Kabengele's third year option has already been declined.

Mfiondu Kabengele was taken with the 27th pick in the 2019 NBA Draft. Already had his third-year option declined. Saves the Clippers cash. He is the nephew of Dikembe Mutombo.

The Kings acquiring the nephew of Dikembe Mutombo in Mfiondu Kabengele.

We'll keep you updated as the Kings continue to make moves up until the trade deadline on March 25th.

Update: ESPN's Bobby Marks added some clarification on the cap and money specifics.

Savings for both teams:

The clippers wouldn’t take Bagley so it had to be a protected 2nd round pick instead.

I know we haven’t done this much since TKH commenced, but WHERE IN THE HELL IS THE YELLOW BANNER, GUYS?

OMG this is amazing! The trade nobody saw coming! What a stat stuffer!

Last edited 1 year ago by MillersCornrows
8

Being an SF Giants fan, this feels very Farhan Zaidi-esk. Cheap look at a previous prospect to fill out the lack of depth at the end of the bench. Also looks like we pick up an additional 2nd rounder for our services in adding to payroll. I know nothing of this guy but he is young and a cheap flyer. This adds one to the roster without removing anyone, which gets me the most excited about this move. Seemingly a precursor for others transactions to occur, but not necessarily required for the cost.

I don’t know why you’ve never heard of Mfiondu Kabengele. He’s scored like 27 points this season! They picked him up to package him with Bagley.

So he’s there to basically sweeten the salary dump. Gotcha.

There are 3 things certain in life: Death, Taxes, and the Kings wanting Cash Considerations.

Very exciting to have Cash Considerations back on the squad

Gotta love this Cash too

I couldn’t find the answer…if the Clippers have already declined his option is he unrestricted at end of the year? Are there any rights or restrictive elements to his contract to benefit Kings at end of year, if they did want to resign?

He is a UFA at the end of the season. Kings are simply getting paid to eat his remaining salary and lower the Clippers tax bill.

Thanks for clarifying…he is a little interesting to me. In a Kings fan desperation sort of way : )

Last edited 1 year ago by WizsSox
2

They’re renting a Uhaul for Bagley to drive down to LA and pick him up so they’ll only be out the cost of the Uhaul.

There goes the tank!

With this idiotic staff/lack of plan, he likely won’t get any minutes

From a glass half full view, he has a quick release and high BBIQ (there is tape of him making a read and directing Kennard to reset the offense, resulting in free throws) based off of a quick 10 min highlight binge on youtube. But realistically this is the Kangz if Jeffries isn’t getting burn he sure as hell isn’t either.

Just watched 4 minutes of highlights when Kabengele played for Agua Caliente. He seemed like a fun player to watch. Sick dunks in the pick and roll and in a transition. Also, took his man off the dribble a few times.

Eh… If the Clips couldn’t use him, I don’t see much value in him. Clips need front court help. If he wasn’t getting any burn in L.A., I doubt this amounts to anything. Other, that addt’l insurance if Whiteside/Holmes are moved.

Whiteside is gone by this weekend at the latest.

I don’t view that as much of a bad thing. Teams like the Clippers prefer to play older veterans. He has Batum, Morris, Kawhi, George, and Patterson eating those minutes at the forward positions. He was a 1st round pick. I honestly have no problem taking flyers on young guys from top teams. Theoretically he should be better than the majority of our bench based off of his draft position.

Ok. That took all of today’s remaining positivity for this team to say. You are most likely right though LMAO.

bout to pick up a Kabengele city edition jersey

LAC give up MK + 2 mill in cash + rest of his salary + a top 55 protected 2022 Hawks pick ( to convey Hawks would have to finish in top 5) for Kings protected second round pick – not sure of details but “unlikely to convey”)
LAC get roster and salary space. Kings get free look, cash and could cut him if something better comes along. Hence, cash considerations deal.

Not sure why they asked for the Hawks pick. The one thing that popped in my brain is Kings could technically ask for the protections to be removed/reduced if they make a subsequent trade with the Hawks.

I feel like we could win fifty games this year.

Maybe the young man can get Bagley’s minutes instead of Whiteside. It literally will cost nothing to see what he’s got.

He was a beast in some games at Florida State. I wonder how much of that was Leonard Hamilton.

With that important culture-building win, the Kings are now 8th in the ping pong ball race, and with another big win can move all the way into a tie for 12th.

And the next three games are all eminently winnable (obviously you never know with this team). But I’m starting to feel more comfortable with my preseason prediction of 32 wins.

Ya’ll are making me sad.

After that Cavs win and the trade we pulled off, I am thinking this team really has a shot at … (I can’t even finish typing this joke)

The kings are SIX wins away from the bottom three.

… a shot in the back by Haliburton? 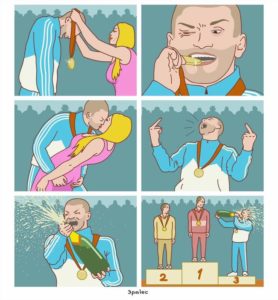