Ever since DeMarcus Cousins was traded the Sacramento Kings have struggled to get to the line consistently.  In the 2017-18 season, the first full season without Cousins, the Kings had the worst free throw attempt rate in NBA history at 14.3% and shot only 16.7 attempts a game.  In the ensuing seasons, the Kings got slightly better, but were still among the bottom of the NBA.

That's changed dramatically this season, as Sacramento currently leads the league in Free Throw Attempts per game (28.0) and is 3rd overall in Free Throw Rate (22.9%).  Through 11 games, Houston is the only opponent the Kings have faced that has managed to get to the line more than them.

What caused such a dramatic shift?

We asked head coach Luke Walton prior to Saturday's game against the Toronto Raptors about the team's mentality when it comes to getting to the line.

"Attacking. We want to be in attack mindset all the time. That's a top priority and we like three pointers that come out of that, that come from attacking the rim and getting to the foul line and making teams rotate (...) we're very pleased with the aggression that we are attacking the rim with."

That attack mentality that Walton mentioned has definitely shown up in more than just the team's free throw rate.  The Kings are currently 2nd in the NBA in points in the paint as well at 53.8 a game.  Only the Indiana Pacers have been better.

The whole team also seems to be buying in, as this isn't a situation in which the Kings have one dominant player who gets to the line a ton a la Giannia Antetokounmpo or James Harden.  De'Aaron Fox leads the Kings in attempts at 6.2 a game, which is good enough for 16th in the league.  Next comes Harrison Barnes at 4.8 attempts and Marvin Bagley at 3.4 attempts.  No other player on the team is above three attempts a game.  For both Fox and Bagley, that's right in line with what they've done historically, as both players do their best work around the rim.

Barnes on the other hand has transformed his game since coming to Sacramento. Gone are the mid-range shots and fadeaways, and he's also gotten more selective with his threes as well.  About 63.8% of his total attempts this season have come within 10 feet of the basket.  In his final 49 games with the Dallas Mavericks, only 39.2% of his attempts were within 10 feet.

That increased time spent around the basket has led to a career-high free throw rate and overall efficiency, perhaps best showcased in his most recent performance against the Indiana Pacers in which he led the team in scoring with 30 points, including 8 of 8 from the line. Just take a look at his shot chart from the game.  Aside from his few three point attempts, every shot came in the paint. 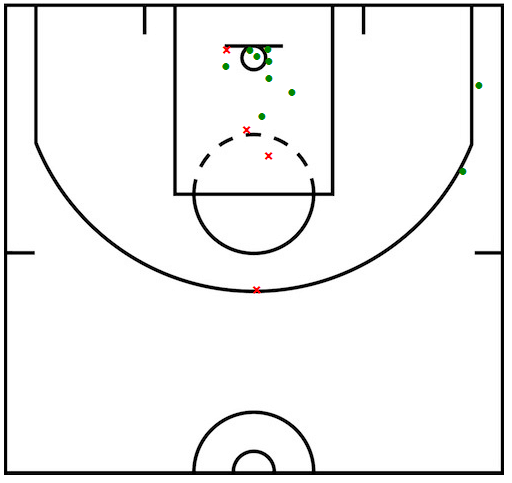 For as much as the Kings get to the line, they still need to work on their accuracy, as they're only 26th in overall Free Throw Percentage at just 72.1%. Both Fox (70.6%) and Bagley (59.5%) in particular drag that percentage down due to their higher rate of attempts.  Still, the more opportunities the better.  The average NBA team scores 1.101 points per possession this season.  Even shooting at just that 72.1% rate equals out to 1.442 points per possession when the Kings manage to get to the line for two attempts.

It's a welcome change for the once free throw averse Kings, and a big reason why Sacramento has been able to beat some good teams early on in the season.  There's a lot of other areas that still need improvement (particularly on defense), but this was a big weakness that has suddenly turned into a strength.

To prevent spam, our system flags comments that include too many hyperlinks. If you would like to share a comment with multiple links, make sure you email [email protected] for it to be approved.
Subscribe
Login
Please login to comment
39 Comments
Oldest
Newest Most Voted
Inline Feedbacks
View all comments

I always thought free throws were a myth.

This is just painful: For as much as the Kings get to the line, they still need to work on their accuracy, as they’re only 26th in overall Free Throw Percentage at just 72.1%. Both Fox (70.6%) and Bagley (59.5%) in particular drag that percentage down due to their higher rate of attempts.

The free throw percentage will never be better than league average because our best free throw shooter hasn’t bought in and has never wanted to take any contact in his career, settling for mid range pull ups, floaters, and bad passes whenever he gets a screen, instead of attacking the rim strongly.

Buddy has success at the rim, we saw it during Joerger’s last year, so idk anymore.

I have high hopes that Tyrese will carry the number soon as he will study the game and use his craftiness to take advantage of his ball handling and slight frame to bait defenders into fouls.

I agree that given Hield’s strength and frame, he should work to get more trips to the free throw line. On the other hand, given his below-average (using NBA standards) athleticism, he’s a lot more likely to be unable to get clean shots away in the paint when surrounded by defenders.

For drives to the hoop, absolutely, Hield should embrace the concept of trying to draw fouls. Once his forward momentum stops, however, he’ll generally be better off trying to find n open teammate.

I’ll backtrack on my original comment that Buddy succeeded in attacking the rim with Joerger because that was when we were 3rd in pace where he had free drives to the rim.

In this half court heavy offense, I agree that his lack of athleticism is a detriment to his role as a scorer in this offense. One play sums him up, which was when he couldn’t dribble past Doug McDermott, made a panicked pass to Barnes, the ball was stolen and Buddy committed the clear path foul. But I just want to see him TRY to attack and TRY to change his game. Everyone else has bought in, especially Barnes and it is refreshing, thus frustrating that Buddy has not.

I agree and I think defenses have picked up on this. They know he prefers to shoot rather than fake and drive. I feel it is one of the reasons his 3pt% have fallen. Teams are up on him and not giving him space because they don’t respect his drive ability.

One only needs to no further than the last game. ALL of Buddy’s field goal attempt were from three. Also, out of 152 FG attempts this year, 109 are from three.

Now, to be clear, I’m not advocating that Buddy stop shooting threes, but you have to keep the defenses honest. If he can catch, fake take a dribble or two and attack the rim, defense will have to adjust which will give him more space from the perimeter.

If Buddy hasn’t utilized pump fakes 5 years into his career, it’s not going to happen. He is who he is.

Also, if he fakes and drives there are two choices, drive and kick or drive and attack. We all know what Buddy brings to the table as a passer and his ineptitude in dealing with contact at the rim, so the bottom line is he’s a bad fit for this team.

He needs a 3 point heavy offense or he needs to inevitably settle into a 6th man role. Both for another team.

Attack rapidly, ruthlessly, viciously, without rest, however tired and hungry you may be, the enemy will be more tired, more hungry. Keep punching.

This sure sounds like a Karl/Walberg dribble drive offense…

No offense is untradable.

I still maintain that as a franchise we would of been lightyears ahead of where we have been and regularly in the playoffs if they just gave Karl the controls, accepted his trade Boogie timing (value was skyhigh), and let him bring in the pieces and styles he wanted.

Now, if we could just hit our free throws…

Use Fox as a secret weapon?

You can do it!

Anybody complaining about Barnes’ contract should stop. We have to pay guys more to play here. Its a fact. Barnes is putting in the work though, leading by example, and best of all NO DRAMA. Harrison was a good signing.

Barnes is the kind of player who looks better when his team has an identity and a system he can fit into. He is the ultimate 3rd/4th option– you don’t want him initiating the attack or carrying the load, but when given a defined role, he can fill the role very well. I agree, he was a solid signing. Hield’s contract (which most people praised at the time it was signed) is more of an albatross than HB’s.

I think we maybe need to wait a little longer before making these types of statements. Barnes has had hot starts to the season before. He had a 13 game stretch November of last season that’s similar to his production so far this season. If you look at his OBPM so far this season, it’s a pretty big outlier versus any of his previous seasons.

Last edited 2 years ago by RORDOG
2

And none of that really has anything to do with asset management. If we were serious playoff contenders now or in the next year, then sure you can keep him and roll with it. We are not in that position and if we have someone under control that can net multiple assets then it’s simply good management to turn that into pieces (chances at pieces) that help the team when we are in that position.

His 3P% over the last three years is about 39%. So even if he cools off, there’s enough data to project him shooting well. I think Hippity Hop just swished a Fade Away jumper.

We could also talk about his passing. His assists per game are at a career high, but even if that number drops, he’ll still share the ball like he has been doing ever since he donned a Kings uniform.

You say that like it’s a good thing. Barnes had the 12th highest AST% on the Kings last season.

You can say that if it makes you feel better. I don’t mind! 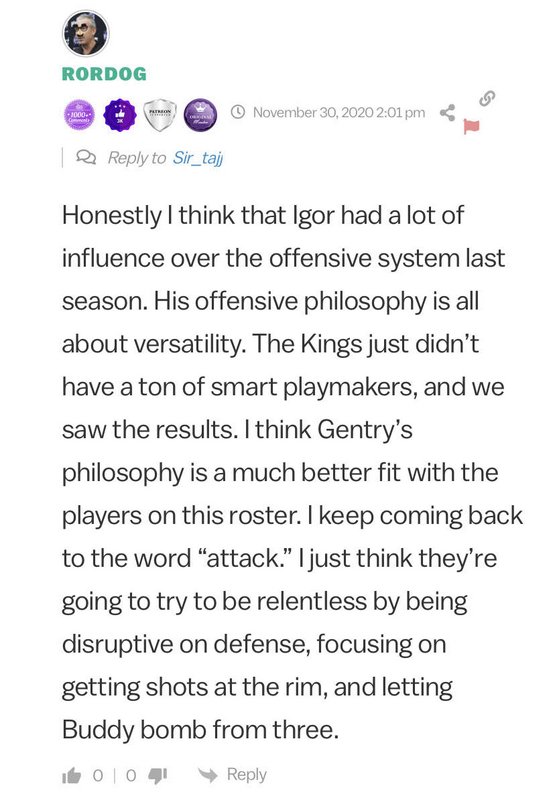 RORDOG is an Influencer!

too bad they didn’t listen to the disruptive defense part

God help us when he writes a cookbook. 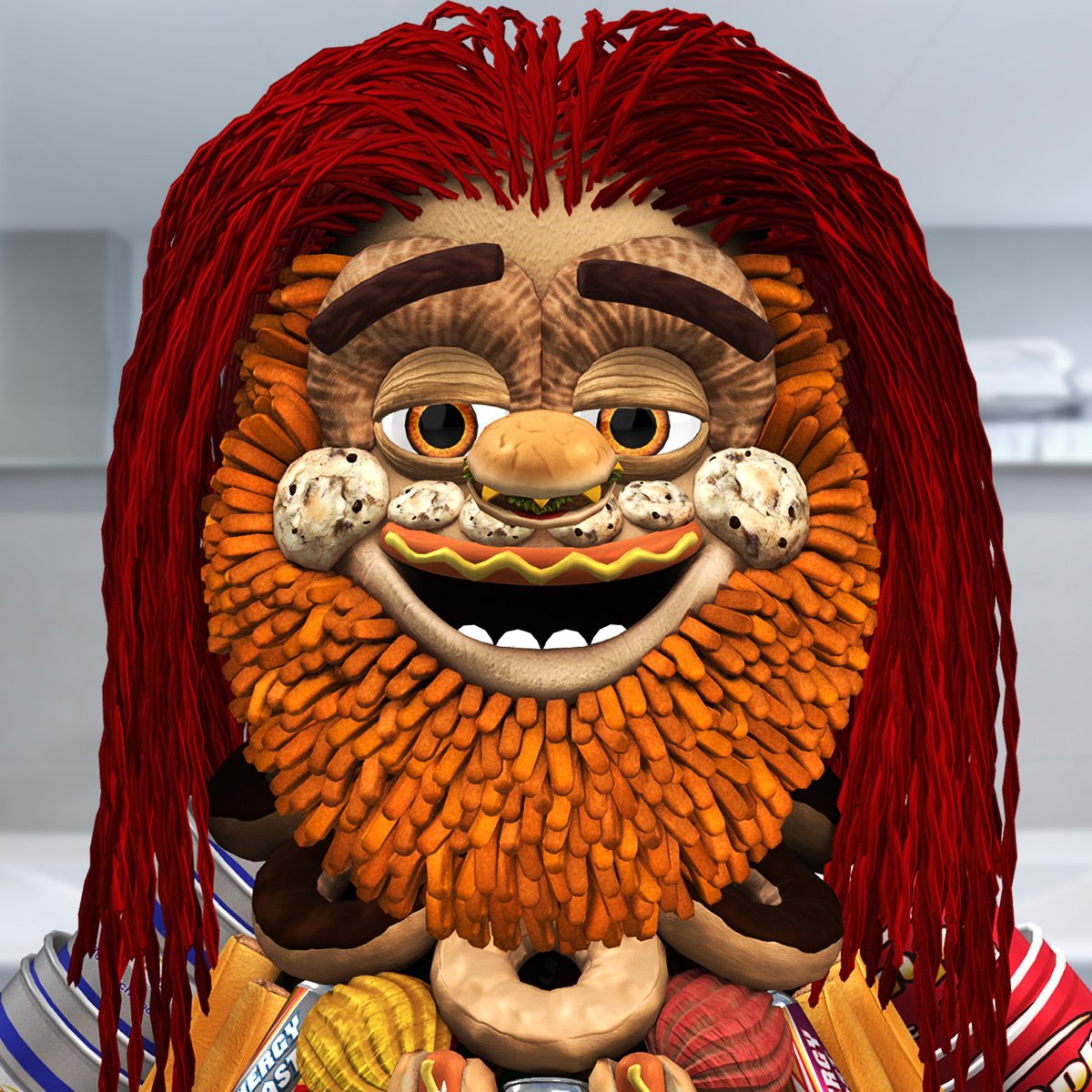 There should be a PodCast on the search for the perfect HotDog ?
Too much good stuff ..

There’s a guy on twitter that reviews like all sorts of fast/junk food. I can’t remember his name, but he’s pretty funny and informative!

Say what now? Wow Barnes is obvious, and I noticed an up tick on attacking, but I had not idea we had some of those numbers. It will be an up and down season, but this year should have some positives and be decent to watch.

Love the analysis you guys do here at TKH.