The 2022 NBA Draft Lottery is upon us! The festivities start at 5 PM PT, and will be aired on ESPN. As we know from experience, the picks themselves will likely come towards the end of the half hour.

The Kings odds of landing at each pick are as follows:

As we're watching, the pre-lottery standings would be announced as follows:

If it isn't announced in that order, a team behind the Kings has moved into the top 4. The order would continue:

If either the Blazers or Pacers are announced before the Kings, it means the Kings have moved into the top 4.

Fingers crossed, lucky shirts worn, children promoted into leadership roles, do whatever you can think of to bolster our odds tonight. Go Kings!

To prevent spam, our system flags comments that include too many hyperlinks. If you would like to share a comment with multiple links, make sure you email [email protected] for it to be approved.
Subscribe
Login
Please login to comment
126 Comments
Oldest
Newest Most Voted
Inline Feedbacks
View all comments

So by start at 5pm, does this actually mean we have to sit through like 30 minutes and endless commercials before they actually start the reveal?

You must watch all the trash that espn has to offer.

The last time Anjali Ranadive was in the news on NBA lottery day, it was 2014 when she represented the Kings.

That year the Kings were slotted at #7 and fell to #8, and then they drafted Stauskas.

Last edited 6 months ago by Adamsite
2

Something small I noticed but during that interview Paolo seemed a bit aloof speaking with the ESPN crew, but the second David Robinson started speaking you could see how laser focused he was on his advice.

After the lottery positions are set I’m really looking forward to Anjali Ranadive’s initial mock draft. Player evaluation being one of her new duties, I expect the organization to rely heavily on her input.

I mean…if her thought is that she couldn’t be any worse than Vlade I get that.

Ahh, it’s that time of year where my hopes are raised before inevitably getting crushed. Let’s go Kings!

At least they aren’t talking to each team representative, like what they’ve done the last few years.

Send Sabonis to ensure that the akward fit with Chet is apparent right away…chews popcorn.

Last edited 6 months ago by satdawg
0

LFG we moved up baby 🔥

Yeah baby! Domas did his job!!!

Last edited 6 months ago by BabalooMagoo
0

We have moved into the top 4. Cannot believe it

DONT FUCK THIS UP!

Well, Well,well! What did I told you?? my gut feeling never disappoints!

Just popping in to say…

I feel A tremor in The Force.

May the 4th be them

crud – May the 4th be with them. You must have felt a tremor in the fourth (not force)

KINGS MOVED INTO THE TOP 4 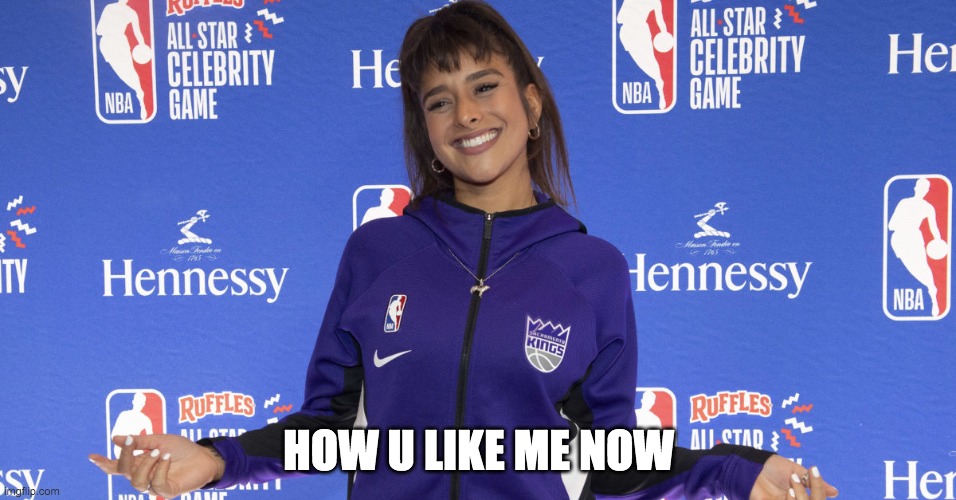 The timing of this BS was not a coincidence.

We are all better off for Konsta being here.

#1 pick in coming for Sac

WOOOOOOO! MUCH easier to make good decisions from higher up.

Best moment as a Kings fan all year.

Everyone of us is just as curious about how they screw this up. Admit it.

I mean, I can’t really be mad. Jumped up 3 spots. I’m happy about that.

In the past I’d have been excited right now.

Last edited 6 months ago by Carl
0

a lock if Kings want him.

He’s definitely the least sexy choice but maybe the smart one, too.

I think he gives you what John Collins would give you without giving up Barnes and the #4 to trade for John Collins.

Not to mention he’d be cheaper.

Last edited 6 months ago by Adamsite
1

My only real concern is if he can play the 4 next to Domas. I’m sure the offense will be fine, but there still isn’t a whole lot of rim protection. If he could play the 3 and make room for another long forward that’d be great, but it doesn’t seem like his natural fit. He’s got a lot of Barnes to his game funnily enough.

He’s a very solid weak side rim protector, second best in the top 10 behind Chet.

Excited to hear how the workouts go. As of now, I’m leaning towards Sharpe. Also, there’s a possibility one of Smith, Banchero or Holmgren drops to 4. Highly unlikely but still a possibility especially if Sharpe or Ivey really impresses in their workouts

god, please do not be a repeat of Bagley best fit.

The time before that they picked Tyreke Evans. I heard the guy the Warriors got later in the draft is still playing.

With the 4th pick in the 2022 NBA Draft the Sacramento Kings select Kofi Cockburn Center Illinois.

Oh wait. That was from Vlade’s white board.

I haven’t been paying much attention to the draft prospects. How is this draft class looking? Will there be some really good names available at the 4th pick?

Initial reports are lukewarm. A lot of talent that’s high-risk, high-reward in the top end, with fewer sure-fire stars. There a consensus top 3 (Chet, Jabari, Paolo), and a wider pool afterwards for tier 2.

Kings get their pick of the Tier 2 or snag whoever gets flubbed from tier 1.

God if someone gets seduced by Ivey and let’s the Kings have Smith or Chet….I can dream…

Yep. That’s the dream. Either way, the Kings are going to have a chance to choose from at least two of Chet/Smith/Banchero/Sharpe/Murray. And while I’ll have my opinions, any one of those guys would be a good choice IMO.

solid but not great draft- no super guy like next year with Victor.
Some say top tier is 3, others say 4.
Smith
Banchero
Chet
Ivey

we get one of these guys. Honestly, I would avoid Chet (Shawn Bradley). My guess is he is top 3 anyway. Then that means Ivey- BPA vs. Murray best fit.
I fell for the best fit argument last time. Will I get fooled again?

Trade the pick up or down. Chet or a Vet

I like Purdue’s Jaden Ivey at #4 — Top shooting guard. Flat out scorer, athletic.

I’m just going to say it. Fox and the 4th pick to Houston for Wood, Gordon and Porter Jr. starters:

Last edited 6 months ago by Claystreet
0

What would you prefer? Keep Fox and add a question mark? Or a different trade? I like the trade with Houston because I like Wood and Porter Jr. and Gordon can still shoot and at 32 he’s not ancient. Wood is 26, Porter Jr. is 22. All three can play. Being that the chosen direction is win now, it seems a trade is most prudent. Unless Jabari Smith falls to 4.

You’d be giving up the two best assets in that trade in Fox and the 4th, horrible trade IMO.

Fox’s money makes him harder to trade in my opinion. He’s simply not worth his pay check. Keeping him isn’t going to get us to the playoffs. Who do you believe would be a realistic return for Fox and his contract?

You are assuming I agree with your premise that he is not worth his pay; I vehemently disagree. At the beginning of the year the Kings asked him to play as a SG to let Hali run point. It was okay, they needed more time to see if it would work, but once they traded for Domas, Fox was back to his old self and earning his money.
People talk shit of his Def but it’s way better than he gets credit for and just wait til he has confidence in his teammates to perform, people will say his Def improved, but it is what happens when someone knows the effort won’t be wasted.

Wow, I feel like we’re looking at both extremes of the Fox takes in these past two posts.

I’d say I’m one of the people more open to trading Fox ’round these parts, but I think the Kings are clearly getting the short end of that deal.