The Kings entered the second half of this back-to-back wounded after a very weird loss to the Golden State Warriors last night. Not weird because they lost, but weird in that they only lost by four points and even had a chance to win had it not been for a Buddy Hield blunder that was somehow both unbelievable and not surprising at all. Statistically speaking, the Kings don't perform well on the second game of a back-to-back, losing seven out of ten so far this season. And statistically speaking, the Kings don't win basketball games without De'Aaron Fox, losing both of the games he's been out so far this season. BUT statistically speaking, the Kings do beat the Dallas Mavericks, remaining undefeated against them so far this season (1-0 is still technically undefeated). Since statistics mean nothing when it comes to predicting anything about this team, let's just see how they did:

The Sacramento Kings remain undefeated against the Dallas Mavericks this season, led by a double-double from Tyrese Haliburton (14 PTS, 10 AST) and an efficient 24 points in 25 minutes from Richaun Holmes. Luka Doncic finished with 24 points and eight assists. The ending was a bit anti-climactic from both teams, filled with airballs, turnovers, and a jump ball. But the Kings win and that's all that matters!!!

For the second night in a row of filling the very fast shoes of De'Aaron Fox, tonight's crown goes to Tyrese Haliburton. It was clear that he was this team's focal point, as he efficiently facilitated the offense, finishing with 10 assists. He also hit some big shots down the stretch and made timely plays to keep the Kings on top during crunch time. In some ways, he is almost a harder assignment in crunch time than Fox, since he passes just as much as he scores, so it's hard to know what he will do. Fox, on the other hand, is so dominant in scoring, that you can almost bet on him taking the big shot. As the youngest player on the roster, Tyrese stepped up as the leader this team needed tonight.

To prevent spam, our system flags comments that include too many hyperlinks. If you would like to share a comment with multiple links, make sure you email [email protected] for it to be approved.
Subscribe
Login
Please login to comment
29 Comments
Oldest
Newest Most Voted
Inline Feedbacks
View all comments

What could have been… 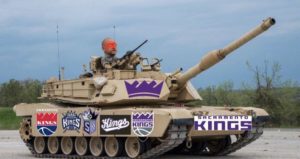 Good luck with that… this sight has an overlord…. ironic yes.

He’s one of those guys that does the dirty work. Spoelstra is a great coach, but he was apparently not thrilled with Miami signing Harkless back in November. Mo seems like an ideal fit on a team like the Heat, and it’s not like they’ve been in such a great groove that he couldn’t get off the bench. Odd.

He makes about $3.6 mil this year, and I wouldn’t mind having him back for 2-3 years at a number like that.

He’s grown on me also. Good pick up.

I think the NBA should allow small market teams to collaborate.

Just imagine Halliburton, Fox and Doncic were on the same team.

traitorous cooperation with an enemy?

Great game, love watching Hali as the main facilitator. I also like the John Wick reference, since I just watched the movie a couple nights ago.

I wonder if doncic would want to sign with us so he never have to lose to us again…..

He’s doing the kings a favor. Free wins for not drafting him to basketball hell. 😉

But he’ll take the ball out of Fox’s Hali’s hands!

Rooting for close losses for higher lottery odds…..yet I don’t mind if we beat LAL or the Mavs ð

Giants were winning by 12 last night, but “Disco” going for the complete game shutout held more interest for me than this game.

Bring on the off-season!

Yea I turned it off in the 2Q to watch A Knight’s Tale, a cheesy film I’ve seen at least ten times. That’s what chasing the eight seed looks like Vivek.

Starting to really question what’s the point of following a zombie franchise that simply exists to provide revenue to the NBA pot, so superstars can gather together in the same old relevant places.

The pathetic seasons have worn away at my fandom.
Listening to the recent THK podcast with the stories about Vivek’s meddling and hubris makes it even harder to root for this team.
I don’t want any Kings’ victories to reflect on Vivek.
Hell, part of me wants my favorite players to flee to other teams.
As for the lottery? The Kings don’t deserve a good pick. It is not because of bad luck that this team is pathetic. It is hubris from the owner and years of mismanagement.
When the Kings walk into a bar, Lady Luck should sneak out the back door.

I only watched the game because I was at work and had nothing better to do. A’s game was already over. I didn’t even bother to watch the game in SF Sunday night. Too busy watching Netflix.

I know losses are more important than wins to this team right now, but if we get a win because Tyrese is leading us to one, I’m okay with it. I still can’t believe we lucked out and he fell to us at 12. Watching the youngest guy on the roster take control of the team like he has with Fox out has been fun, regardless of how putrid this team is as a whole.

OT, this just made me laugh:

The "body piercings" arrow just really did me in 🤣🤣 pic.twitter.com/bHunvzFog5

You could hardly find a better example of cognitive dissonance, although there are thousands from which to choose.

Mirann, just a nicely written story. A good balance of the key points of the game, the history btw the teams and your own fun style. No pretension.
Well done. You are a very good writer.

Thank you for the kind words – means so much to me!