There is your recap.

Utah is a good three-point shooting team and showed it (58%) and the Kings had no answer. On the other side of the ball the Kings offense was non-existent as Rudy Gobert squashed most hope at the rim (5 blocks).

The Kings played competitively in the first quarter (the Jazz led only 30-27 at the end of the first), but the floodgates opened in the second quarter as Utah won that 12 minutes by a tally of 46-17. They never looked back. The largest lead of the game for the Jazz was 54...54!

The whole team was commanding the tank tonight as they raised the flag that displayed their now 25-37 record.

Low turnovers: The Kings kept their turnovers in check with only 12.

That other Bogdanovic guy: Bojan walloped the Kings in the first half as he attacked Buddy Hield’s defense. He was 1-5 from three, but went 7-16 from the field and 9-10 at the line for 24 points in 29 minutes.

The Kings rebounding – The Jazz out-rebounded the Kings 47-24.

Not having Fox and Barnes to calm the team down.

Everything after the first quarter.

So, is this 154 points and the 54 point lead new Sac-era records? I do recall once seeing the score of “40-4” after one quarter with the Kings and Lakers.

Too bad Bagley was sore after playing 3 on 3 in practice. His athleticism and prowess in the paint might have allowed Utah to get to 200.

Going to have the check the tape on that one eh Luke?

Maybe Luke has to watch the tape because he’s not paying attention during the games?

Didn’t read the game thread but for those that did, did k4e chime in to claim that he predicted the halftime score of this game back in August of last year?

When I realized who k4e was, I had a good chuckle.

The sad part is, we all know they will win 1-2 games too many and our lottery odds will plummet. You just know it. Damn you Donaghy!! That was probably our only shot.

I’m just glad we’re not tanking, right?
at least Luke was in a position to play the youngsters a bit.

Too bad this only counts as one loss. 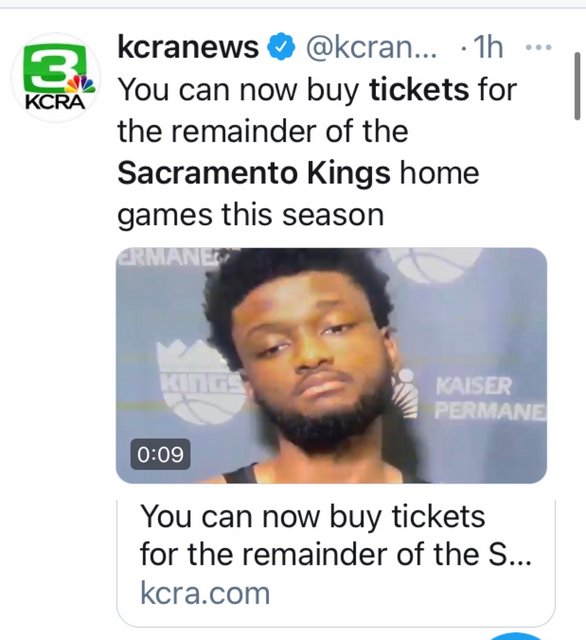 What are the chances that even with a cap of 1500 tickets they can’t get a “sellout?”

No idea why fans would spend money on this team. They offer nothing of value.

Is there not value in the average person getting the opportunity to boo, shout, and otherwise express their displeasure at insulated millionaires and billionaires?

“Here is my money, I would like to boo now.”

I didn’t say it was good value.

I think there is still value FOR SOME to get out and do something, anything.

I know that feeling though of plopping in the seat, wondering why the hell I did this again. I’ve seen enough of Golden 1, I’m good.

You see what you’ve done here Vivek? This is your fault.

Absolutely joke. To watch this team, this coach and think a playoff push is in the offing is delusional. Vivek is in an ego haze.

Carmichael Dave tweeted that at the end of this season, every team that drafted in the top 5 of the 2018 draft will have made the playoffs except for the Kings. This franchise has had every opportunity to get better but has constantly and consistently failed under Vivek.

8 years into his ownership and we’re just as far away from the playoffs as we were when he first took over. There is no player or GM that can save us. With Vivek running the show, the team will continue to flounder irrelevantly. Eventually the fans will get sick of it (can already see it happening) and the passion and love for the franchise will be gone. Vivek will poison this fan base to the point where people won’t even care if the team decides to move to another city.

Vivek please sell the team. You are not fit to own a team. You couldn’t lead a franchise into the playoffs even if the league gifted you 8 straight number 1 picks. Your meddling personality prevents you from enjoying what little success your team achieves before you decide to fire a coach or bring in a new basketball advisor. You are as toxic as Demarcus Cousins was as a leader of a basketball team. It’s no wonder you connected with him when you first took over.

After this season ends, Vivek will have missed the playoffs more than the Maloofs. They were broke. What’s your excuse?

I’d say we are at least three seconds ahead of the kings from eight years ago….

Two years from being two years away (but with three seconds)

We did have 7 playoffs with the Maloofs ! 2 with J Thomas and 1 with Luckenbill ! 0 and counting for Vivek !

VA Beach has an opening!!!

Careful, if he finds out who you are and sees you at a game he might ban you from the arena

Are we a Jazz Band yet? Nothing like being schooled in Jazz by two older white guys. Had to turn it off at half with Bogdonavic and Ingles getting whatever the F they wanted and the Kings down 30. Half time adjustments and I see it turned into to a 49 point loss LOL. Yikes.

A Croatian and an Australian…

Exactly. What do Aussies and Croatians know about Jazz?

Feel bad for Haliburton. Wanted to come here and this is the best we can do for him

On the bright side, we had one less turnover than the jazz! How come you guys don’t talk about that fact!!!!!?????

This is more bad than good

How? There’s been multiple 40 and 50 point losses this season; it’s just like any loss imo

The Jazz are everything I want the Kings to be. They defend, play hard, play with their heads and, most importantly, KNOW WHAT THEY’RE DOING. Conley and Mitchell out? No problem, we have a system in place that generates good shots. Fox and Barnes out? lol guys lets play some pick & roll and we’ll see *shrug*

Last edited 19 days ago by DutchKingsFanInUK
9
0

I looked back at the Utah Jazz draft history since 2006 (last season we went to the play-offs). They only had 3 top 10 picks:

Gordon Hayward left and the Jazz got nothing in return.
Kanter was traded for very little and Dante Excum got them Clarkson.

In 2012, Dennis Lindsey became the Jazz GM. Still there.
In 2014, Quin Snyder replaced Ty Corbin as HC. Still there.

In 2014, they got Ingles off waivers.
Gobert was the Nuggets 27th pick in 2013, traded to the Jazz for the 46th pick and cash considerations.
In 2017, they signed Royce O’Neal after summer league.
Mitchell was the Nuggets 13th pick in 2017, and they traded Mitchell for Trey Lyles.
In 2019 the Jazz traded for Conley, in exchange  for Grayson Allen, Crowder, Korver, the draft rights to Darius Bazley, and a protected first rounder.
Also in 2019, they signed Bojan Bogdanovic to a 4 year FA deal.
In 2020, Derrick Favors returned and signed a 3-year deal.

A team that knows how to scout and find players that fit what they want to do. The Kings need to follow that route, but not sure I will be alive when they figure it out.

The kings would have to have an idea of how they want to play. That’s what a good coach would figure out and work with the front office on. Monte needs to hit on the right coach just as much as the next draft pick this upcoming offseason.

It’s almost like having smart people in charge helps you in some kind of way? Who knew?!

I didn’t. That’s why I always surround myself with people smarter than me.

I challenge you to a pushup battle.

Imagine how good a Fox/Mitchell backcourt could have been.

I point blank asked Vlade this question at a Kings event I got to go to. The answer was that if they were able to get Fox, there was zero consideration for drafting another guard, under any circumstances.

Old mentality that is also flawed, hence why he was so bad. Like what if the Warriors didn’t Klay because they had Steph? McCollum because they had Dame? etc. I despise him more and more everyday.

He always acted like they were one well-fitting player away from being good. Which, of course, was never the case.

He always acted like they were one well-fitting player away from being good. Which, of course, was never the case

It’s called smartness.
Grabbing Ingles was a great investment.
I watch all their games and he is gold. Sometimes I think he is there MVP because he can do so many things and is calm when running the offense.
Rudy is a beast and Donovan is Donovan.
Most of the players on the team are multi-skilled, much like a player the Kings opted not to draft a few years ago.
It’s a dynamic team.
Sadly, though, nobody on the Jazz can double-jump.

I love Ingles. I think Tyrese can have a similar impact from a BBIQ perspective. Digfferent palyersm of course.

Walton should be showing up at the office today and find his shit in a box outside doors with changed locks, but that’s what would happen at a franchise with accountability that wants to improve so nevermind. The problem with sports leagues is they share money between teams so rich people can buy small market teams, do absolutely nothing as they lose, and profit. So long as they get paid to fail they don’t feel the need to spend to succeed.

I completely forgot there was a game last night, got the halftime score notification on my phone, laughed, and went back to what I was doing before.

Apparently what limited fans there were inside were booing? Good.

I’m guessing the audio guy was trying to drowned them out with the fake crowd noise being piped in.

This means Vivek will pass the Maloof who had 7 years of no playoffs. Vivek, with now 8 seasons in control, officially owns this playoff drought.

It IS kinda perversely impressive to be bad for THIS long. It’s hilariously statistically unlikely. Keep in mind, you don’t even have to be a good team to make the playoffs. This is a league where teams that are, by definition, below average make the playoffs.

There is no doubt, Vivek has replaced James Dolan.