Forums
Kings Discussions
Videos of Kings Pla...
A Double Take on Do...

A Double Take on Double Drags

I’ve noticed the Kings running double drags in preseason and into the regular season. A double drag is when the ball handler, usually a guard, utilizes two screens set on top of each other at one of the slots or at the middle near the three point line. One screener, usually the first and a big man, rolls and the second screener, not necessarily a big man but usually bigger than the guard, pops. This is meant to create confusion among the three defenders and open up someone for a good shot attempt. Usually the first screener rolls and the second pops but it’s most important that the second screener have a bigger size difference to the ball handler. See the play diagram below. 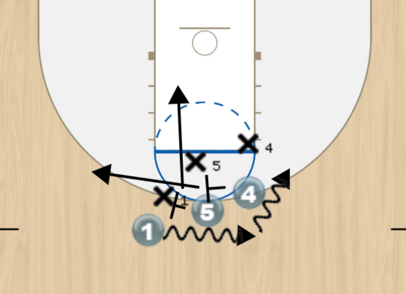 Here are nine instances of these double drags in the recent Jazz and Warriors games.

This first instance is a bad example. Barnes seems ready to play the part of the first screener (popper) but for some reason Fox seems to call for Davis to play that role. Neither Davis nor Holmes set really any type of screen for Fox and as a result Conley sticks close to his man. Fox drives in and misses the shot.

This one with Fox, Bagley, and Holmes also has lame screens, but it’s also very interesting. Bagley rolls hard to the rim after his sorta-screen. Buddy sees this and runs toward the top of the three point line, lightly touching Bagley’s man and utilizing what turns into a middle pindown by Holmes. I’m not sure if this was planned or just Buddy improvising, but it works for three points.

In this one Len does not set a screen but he does roll fast and hard to the basket. Haliburton’s man got clipped by Barnes so he must rearview pursue. Whiteside on the Jazz must go into drop due to the threat of Len for the lob. That leaves Haliburton able to cash on the floater.

Here is something I’ve seen run a few times in preseason. Barnes and Len set a half-hearted double drag for Fox because the real action is a stagger for Davis. The double drag screens (or lack thereof) transition right into the stagger. A stagger is two pindowns set on top of each other for an off-ball cutter. Conley avoids the screens and Davis misses the shot. With this, I’d like to see a real double drag set for Fox. Maybe Fox can take it in for a score. Maybe the Jazz wouldn’t be able to tell so easily that it was not the real action. Worth a try.

Here Davis is the ball handler. He uses the double drag and Gobert ends up switched onto him. Davis takes what I think is an ill-advised run at the basket (Davis is a gunner imo, great when he’s hot) but it works out as he is able to get the layup past Gobert.

Here is another half-hearted double drag into a stagger. The action blows up at the stagger, but Conley does get switched onto Barnes. Fox gets him the ball, but the quick Conley pokes it free for the turnover.

Right out the gate in this game Haliburton runs a double drag with Barnes and Holmes. Tyrese is moving, Barnes spaces out to the left slot, and Holmes rolls hard. Draymond Green, on Barnes, is the logical tagger of Holmes, but he lets him go knowing he must stay on Barnes at the three point line. The end result is a lob slam for two points.

Haliburton handling again with Barnes and Thompson the screeners. This time the defender on the roller sees the pass and disrupts it. Thankfully, Thompson is able to salvage the play and finish.

This time Holmes does not roll for some reason, and the action breaks down. The possession is saved by a lucky bounce from a well-defended Fox on the three-point shot.

If you read this far, I hope that was fun seeing a regular Kings action that’s happened frequently in early games. If you hadn’t seen it already, maybe you can spot it as we go forward.

Dug your post. Learned something. Thank you. I wish more members would spend some time here. At the old site I always thought that the member posts were at least as interesting as paid staff stuff (mini alliteration), (at least some of time). Good work catterj!